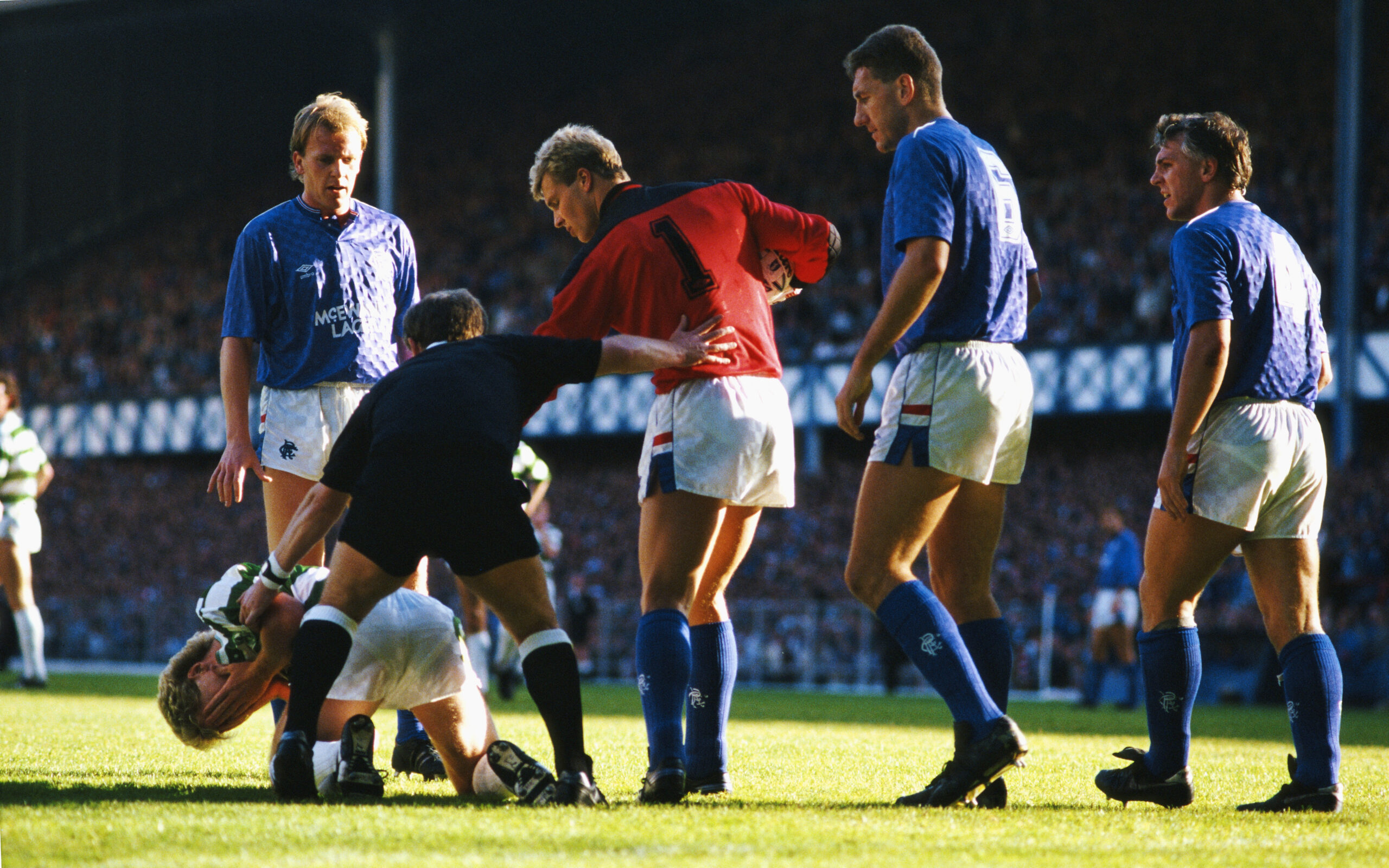 It would be fair to say that football rivalries can be extremely bitter, inflaming heightened feelings of animosity both on and off the pitch.

Debates about which are the biggest football rivalries often cause arguments and can be clouded by how close someone is to a particular head-to-head.

With that in mind, we have scoured the globe to identify what we believe are the 25 biggest football rivalries on the planet.

Let’s take a look at some of the biggest football rivalries, starting with one which has rumbled on for more than 100 years.

While the Scottish Premiership lacks the prestige of other major leagues, it is undoubtedly home to the most bitter rivalry in world football.

Politics and religion are the key drivers behind the bitterness between Celtic and Rangers in a rivalry that transcends the borders of the country they play in.

The animosity has intensified in recent years, with Celtic fans arguing that the ‘Old Firm’ died when Rangers were liquidated in 2012 due to financial issues.

The two most successful clubs in the history of English football have established a rivalry that transcends the boundaries of football.

The rivalry has its roots in the construction of the Manchester Ship Canal, which was built to circumvent Liverpool’s control over trade.

While both clubs have rivals in their own cities they could hate, Man United vs Liverpool is THE main rivalry for each set of fans.

Take the ethos of Spanish nationalism (Madrid) and mix it with the desire for Catalan independence (Barcelona) and you’ve got the perfect backdrop for El Clasico.

Its roots were established during Francisco Franco’s reign as Spain’s dictator and has since spiralled into one of the most bitter rivalries in European football.

Given their status as the dominant forces in Spain, the hatred between Real Madrid and Barcelona is unlikely to diminish anytime soon.

Many respected pundits believe the rivalry between Boca Juniors and River Plate is the most bitter in world football.

The Buenos clubs represent two sides of the class divide – Boca are working class while River Plate are the aristocrats.

Fans have been known to throw dead pigs at each other in the stands when the two sides meet. Nasty.

The history between Man United and Man City dates back to 1881, although it took a few years before the rivalry started to heat up.

Each club has enjoyed periods of dominance where they have lorded it over their local rivals, particularly during the Premier League era.

City are currently in the ascendancy, but United are showing signs they are on the way back, setting up some potentially tasty future encounters.

There is no love lost between these two Istanbul giants, and their rivalry often causes massive headaches for the police whenever they meet.

One of the most infamous incidents between the two sides occurred in 1996 when Graeme Souness nearly sparked a riot by planting a Galatasaray flag in Fenerbahce’s centre circle.

Souness was escorted off the pitch by police, but they were unable to prevent him from being attacked by a supporter in the tunnel.

Partizan and Red Star Belgrade’s stadiums are just a 12-minute walk apart in the Serbian capital and the rivalry between the two clubs is explosive.

The Belgrade derby has long been associated with violence, with clashes between fans a common occurrence whenever the two teams meet.

The rivalry is also fiery on the pitch as both sides are generally in the running for silverware in the Serbian league.

Fans who believe football started with the inception of the Premier League in 1992 may be surprised to see this rivalry included in the list.

However, these two founding members of the Football League have a long history of bitterness between them, particularly amongst the respective fanbases.

Societal differences are a common theme in football rivalries and that is undoubtedly the case where the Milan derby is concerned.

Milan are the city’s working-class club, while wealthier people tend to follow Inter. Politics have also influenced relations, but not to the same extent as other rivalries.

Sharing the same stadium appears to have brought the two sets of fans closer together, but that could change now their clubs are challenging for honours again.

Chelsea fans will beg to differ, but the two biggest clubs in London have historically been Arsenal and Tottenham Hotspur.

Their rivalry dates back to before World War I when Arsenal relocated to the north of the city to be just four miles away from Tottenham.

The head-to-to intensified when Sol Campbell joined Arsenal in 2001 – a move for which he still gets abuse from Spurs fans today.

Dating back to 1917, the rivalry between Corinthians and Palmeiras always sparks intense ill-feeling between the two sets of players and fans.

Corinthians were previously the only club Sao Paolo, but a group of Italian members broke away to form Palmeiras, earning the nickname of the ‘betrayers’ by their rivals.

The two sides are perennial challengers for silverware in Brazil, while Corinthians also have the honour of being two-time Club World Cup champions.

The rivalry between Ajax and Feyenoord is effectively an extension of the differences in culture and attitude of the two biggest cities in the Netherlands.

Amsterdam is a cultural city that attracts millions of visitors each year, while Rotterdam is the industrial centre of the country.

Violence between the two sets of fans has often been a common feature of De Klassieker, although the police have got to grips with it in recent years.

Paris and Marseille are the two largest cities in France and have inevitably produced two of the most successful football clubs.

‘Le Classique’ is viewed as a battle between the capital city and the provinces, but also has elements of north versus south at its core.

Success in Europe for both clubs inflamed the animosity, while the bribery scandal involving Marseille in the 1990s took things to another level.

The Derby du Nord dates back to 1937 and is another fierce rivalry underpinned by economic and social differences.

Lille is modern and middle-class, while Lens is historic and working-class, providing the perfect platform for vitriol between the two fanbases.

The bitterness was demonstrated in brutal fashion in September 2021, when riot police were forced to take action after clashes between the two sets of fans in Lens.

Societal differences underpin the biggest rivalry in Greece, with no love lost between upper-class Panathinaikos and working-class Olympiacos.

The two sets of fans despise each other – violence is unfortunately a common feature of the rivalry and has even resulted in deaths.

The seismic hatred between the two clubs runs so deep that it even extends into their basketball, volleyball and water polo teams.

Lazio refused to join the new Roma club, sparking a territorial battle that leads the former to claim they are the city’s only true football team.

Political differences also have an impact, with Lazio followers leaning heavily towards the right wing while Roma trend to the left.

In addition to their long-standing beef with Barcelona, Real Madrid also have city rivals Atletico to contend with.

Cultural differences are central to the bitterness – Madrid are the establishment club, while Atletico are the mavericks.

Madrid fans will say El Clasico is the game that matters most to them, but it’s a different story where Atletico are concerned.

The rivalry between Dinamo Zagreb and Hajduk Split dates back to the 1920s, but accelerated when Croatia declared independence from Yugoslavia in 1991.

From graves dug into the pitch to death threats against players and more, it would be fair to say the respective fans loathe each other.

Games between the two sides are always feisty affairs, further demonstrating the passion generated by one of the most bitter rivalries in Europe.

The 1969 Welsh Cup Final between Cardiff and Swansea was the trigger for a level of antagonism that remains firmly intact today.

Both legs were marred by serious crowd disturbances and further instances of hooliganism in subsequent years saw away fans banned from the derby during the 1990s.

These South Wales rivals still despise each other and meetings between the two sides are always fiery – both on and off the pitch.

The Uruguayan Clasico is one of the oldest derbies in world football and sparks plenty of animosity both on and off the field.

The match once resulted in numerous arrests after a huge fight erupted involving players and staff from both sides at the Estadio Centenario.

There have also been several instances of fan violence, most notably when a Nacional supporter was shot and nearly killed by a Penarol follower less than a mile from the stadium.

Dating back to 1879, the rivalry between Birmingham City and Aston Villa has its roots firmly set in the quest for regional dominance.

Fan violence is a regular feature of meetings between the two sides, causing headaches for police inside and outside the respective stadiums.

Things often get feisty on the pitch when the two teams meet – a point perfectly highlighted by Dion Dublin’s infamous headbutt on Robbie Savage in 2003.

As the two most successful teams in Mexico, it comes as no surprise to find that there is no love lost between Chivas and Club America.

Chivas are known for exclusively signing Mexican players, while Club America take a more expansive approach to their transfer dealings.

A brawl between the two sets of players in a game in 1983 demonstrated the depth of ill-feeling between these two famous clubs.

The rivalry between West Ham United and Millwall developed during the early 1900s and has its roots in disputes between dock workers from opposite sides of the River Thames.

The two clubs often operate in different divisions, which has only served to intensify the bitterness on the occasions they meet each other.

Hooligan firms have historically been at the core of the rivalry, and improved policing methods have not been able to quell the angst between the two sides.

The Derby du Rhone pits the wealth of Lyon against the working-class ethos of Saint-Etienne – a common theme amongst football rivalries.

A feature of the head-to-head is that very few players transfer directly between the two clubs, and those that do receive a ton of abuse from their former fans.

Fan violence outside the stadiums is rarely far from the surface whenever the two teams meet, while the atmosphere inside the grounds puts many other rivalries to shame.

Ferencvaros and Ujpest first met in February 1905, but it wasn’t until the 1930s that the rivalry started to gather pace.

Ujpest are viewed as outsiders in Budapest, with the district they are located in previously not part of Hungary’s capital city.

Police presence is extremely heavy whenever the two teams meet, but that does not stop fans on both sides from engaging in serious disorder.

Read more: Check out our article on the biggest international football rivalries in the world.