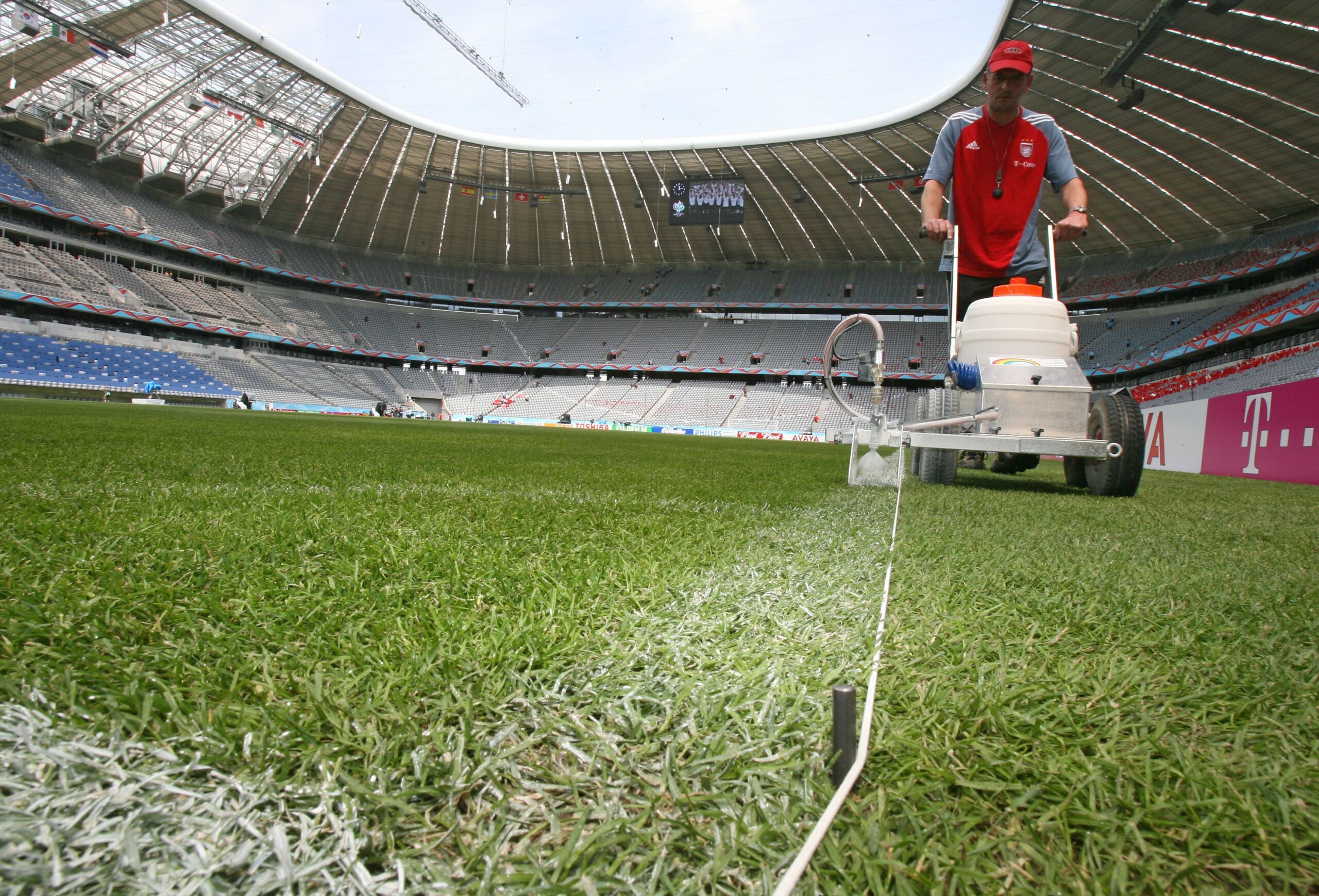 How big is a football pitch? It is a commonly asked question in the sport and the answer is not as straightforward as you may think.

The measurements of football pitches can change quite considerably depending on numerous different factors – let’s take a closer look.

According to the latest Football Association (FA) regulations, pitch dimensions must fall between 100-130 yards long and 50-100 yards wide.

The penalty area should measure 18 yards away from the centre of the goal line, while the penalty spot should be 12 yards from the goal, regardless of the overall pitch size.

A good example of pitch dimensions is Wembley Stadium, where the playing surface measures 115 yards long by 75 yards wide.

While FIFA’s suggested pitch measurements differ slightly for junior football, the two organisations are on the same page regarding the sport at senior level.

Goals are placed at the centre of each goal line. These comprise two upright posts placed equidistant from the corner flags, joined at the top by a horizontal crossbar.

The inner edges of the posts are regulated to be 24 feet apart, and the lower edge of the crossbar must be eight feet above the pitch.

The goalposts, which must be white, should be made of wood, metal or other approved materials. Nets are hung from the frame.

The penalty area is a large marked rectangular area which is also known as the 18-yard box. Its lines start 18 yds from the goalposts and extend 18 yds into the field.

This area denotes where the goalkeeper may handle the ball and where a foul by a defender can be awarded as a penalty kick. The penalty spot is 12 yds in front of the centre of the goal

The penalty area also contains a rectangular goal area which is more commonly known as the six-yard box.

This is formed by two lines starting on the goal-line six yards from the goalposts and extending six yards into the pitch. They are joined at the top by the six-yard line.

No players can enter this or the penalty area when a penalty kick is being taken apart from the penalty taker and goalkeeper.

The centre circle is marked at 10 yds from the centre spot. Similar to the penalty arc, this indicates the minimum distance that opposing players have to keep at kick-off.

The arcs in the corners denote the area – within one yard of the corner – in which the ball has to be placed for corner kicks.

Opposition players must be 10 yds away during a corner, and there may be optional off-pitch lines marked at this distance to denote this.

Football is generally played on a grass surface, although artificial pitches are allowed in some leagues where adverse weather conditions are prevalent.

The strain placed on grass pitches by cold climates has necessitated the installation of artificial turf in the stadia of many Scandinavian clubs.

However, many leagues and football associations prohibit the use of artificial pitches and insist that all games are played on a grass surface.

The FA has invested a significant amount of funding supporting the improvement of grass pitches over the past few years.

This is aimed at improving the standard of pitches lower down the scale by encouraging clubs to follow the recommendations laid down by the FA grass pitch standard.

Maintaining a grass pitch requires certain jobs to be performed at the right time of year, in the right weather conditions and with the correct equipment.

How Long is a Football Pitch?

As mentioned earlier, the length of a football pitch is governed by several different factors. At senior level, pitch dimensions must fall between 100-130 yds long and 50-100 yds wide.