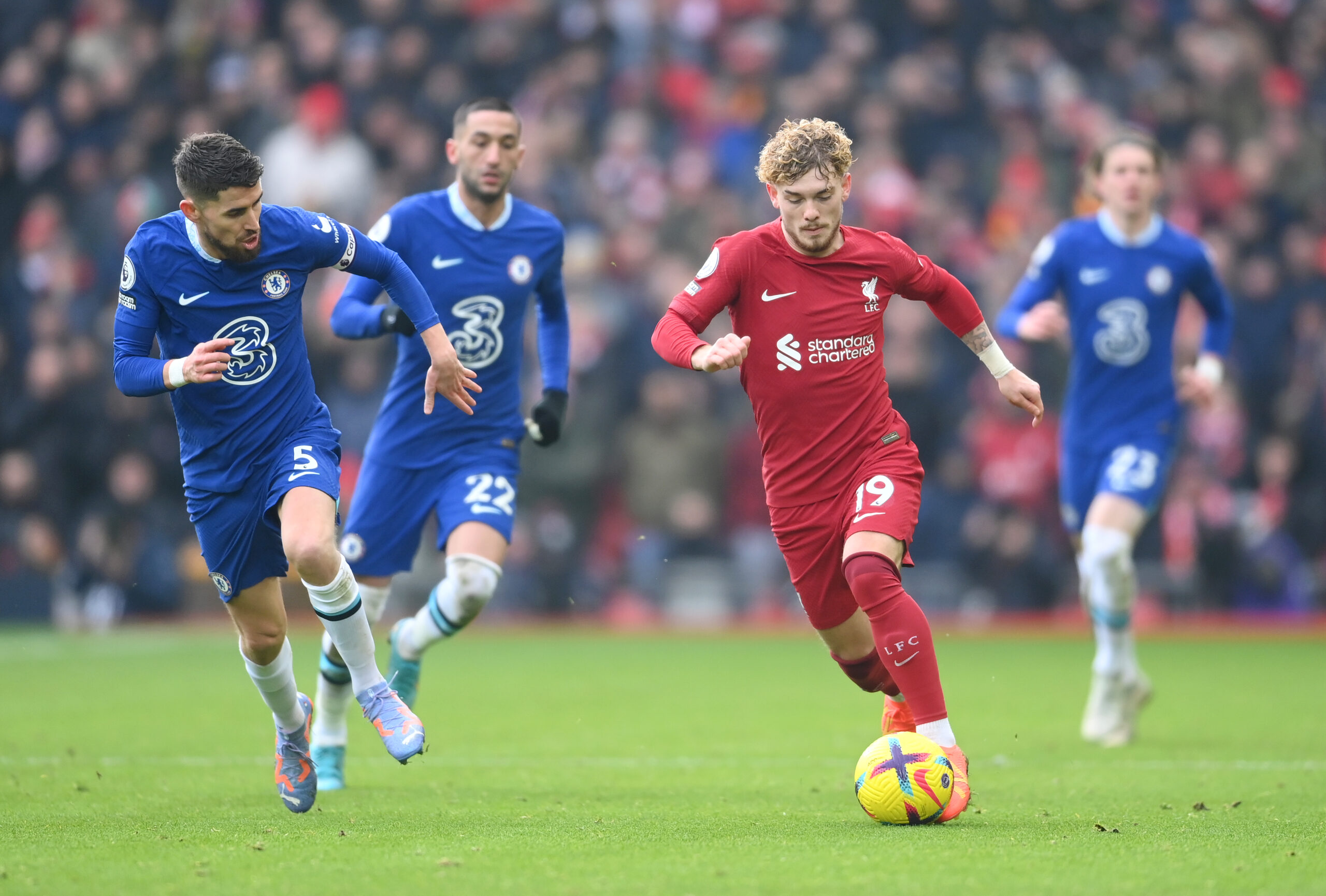 Liverpool and Chelsea held each other to a 0-0 draw in the Premier League in an uneventful affair at Anfield today.

The hosts survived an early scare when Kai Havertz turned in after Thiago Silva struck the post. However, replays showed that the German was marginally offside, and VAR ruled the goal out.

The Blues continued to be on top in the first half. Conor Gallagher volleyed straight at Alisson, and Benoit Badiashile had a close-range header kept out from Hakim Ziyech’s free kick.

Down the other end, there was little to report. Cody Gakpo and Mohamed Salah had wayward efforts sail harmlessly off target, while Thiago saw his deflected strike fall comfortably into the arms of Kepa Arrizabalaga.

The Reds came out after the break with much more threat, and produced the first chance of the second half. Stefan Bajcetic nodded across for Gakpo, but the Dutchman couldn’t keep his header down.

Shortly afterwards, Ziyech fashioned himself a wonderful chance after a fine solo run. However, he couldn’t keep his composure and fired his shot way over the crossbar.

Graham Potter brought on January signing Mykhailo Mudryk for his debut, and he twice came close to making an immediate impact.

First, he weaved past Joe Gomez and James Milner but could only find the side netting from inside the box. He was then picked out by Ziyech’s cross but miscontrolled at the crucial moment.

Darwin Nunez was also substituted on and had an impact, setting up Gakpo for a saved effort while also shooting straight at Kepa from a tight angle. But neither side was able to make the breakthrough, and the final whistle went with the game scoreless.

The draw doesn’t do much for either side. Liverpool jump above Brentford into eighth on goal difference, while Chelsea remain in tenth.

Alisson (7/10) – Made one vital save from Badiashile in the first half. Handling was good but kicking was somewhat erratic.

James Milner (5/10) – Defended well in the first half. Struggled when Mudryk came on.

Ibrahima Konate (7/10) – Let little past him but sometimes shaky on the ball.

Andy Robertson (6/10) – Didn’t stop running. Delivery could have been better.

Naby Keita (5/10) – Didn’t do much of note while on the pitch. Substituted in the second half.

Thiago (7/10) – Calm and classy on the ball, although he played the occasional loose pass. Liverpool’s best on the day.

Mohamed Salah (5/10) – Struggled to do much up against Cucurella. Final ball was disappointing.

Cody Gakpo (5/10) – Got into some good areas but finishing was lacking.

Harvey Elliott (5/10) – Had a couple of nice touches but was unable to impact the game much.

Kepa Arrizabalaga (7/10) – Reliable when called upon. Not required to make any particularly difficult saves.

Thiago Silva (8/10) *MOTM* – Let nothing past him. Handled the physical threat of Gakpo and Nunez well.

Benoit Badiashile (7/10) – A solid game. Missed a glorious opportunity to open the scoring.

Marc Cucurella (7/10) – Stopped Salah from having much of an impact on the game. Did little in attack.

Conor Gallagher (5/10) – Worked hard, but couldn’t get a grip on the ball. Committed a few fouls.

Jorginho (6/10) – Decent on the ball and made a couple of tackles. Couldn’t gain control in midfield.

Hakim Ziyech (7/10) – Delivery was often good. Had one fine solo run that was unfortunately spoiled by a poor finish.

Mason Mount (5/10) – Played a couple of good passes but unable to consistently affect the game.

Lewis Hall (5/10) – Fairly quiet in the first half. Substituted shortly after half-time.

Kai Havertz (5/10) – Had an early goal ruled out for a tight offside. Got into some promising positions but decision-making was questionable.

Mykhailo Mudryk (7/10) – Looked very bright after coming on. Could have grabbed himself a goal or two.