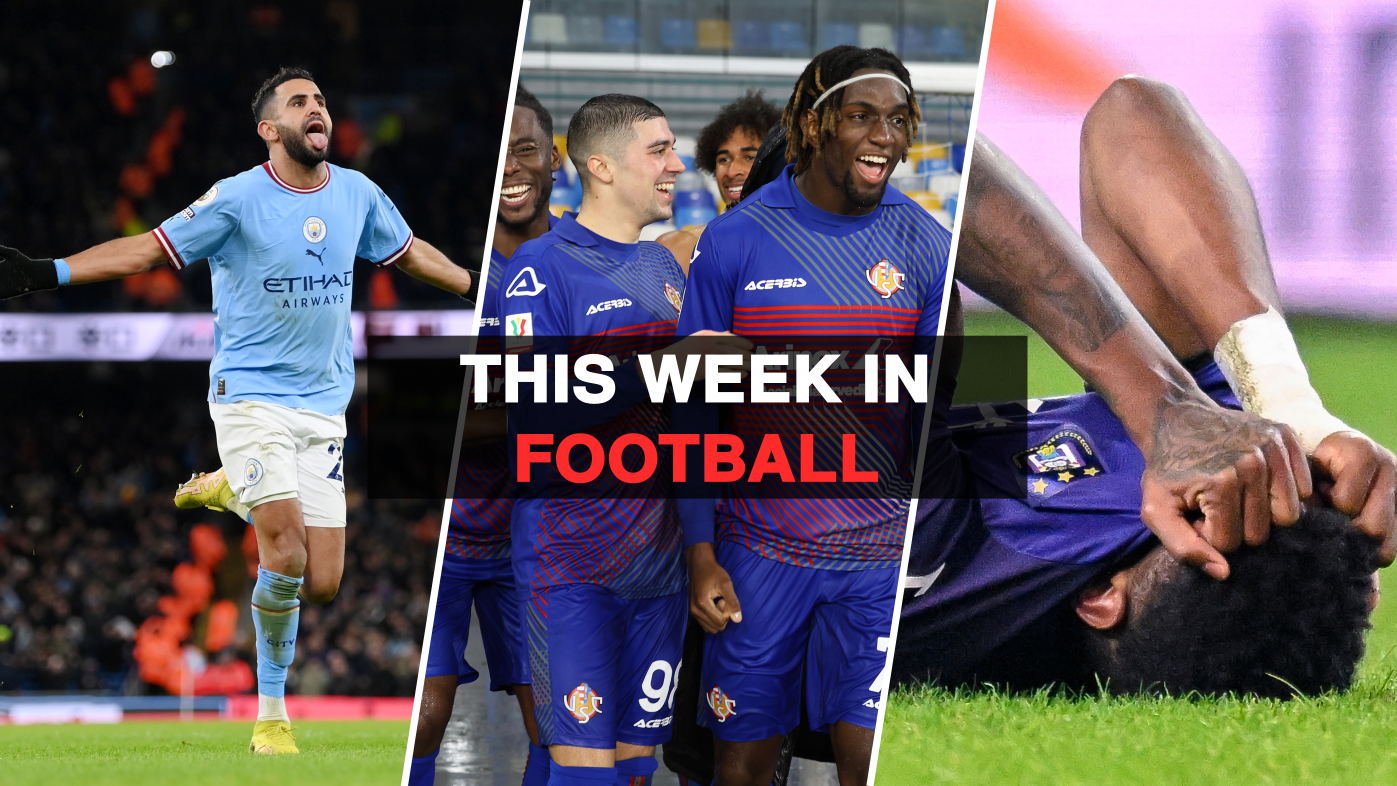 Cups and leagues across Europe and in many places around the world were in action this midweek, which means we have lots to discuss in this edition of This Week In Football.

Here are the biggest results and storylines.

After their respective derby defeats on the weekend, Manchester City and Tottenham Hotspur needed to win to get their campaigns back on track when they faced each other on Thursday night.

As you might expect, the defending champions dominated proceedings in the first half and created some good chances too, but failed to take them. Then, on the stroke of half-time, they made some catastrophic errors at the back, allowing Tottenham to take a two-goal lead into the break.

As things stood, City remained eight points behind Arsenal having played an extra match, so their title charge seemed to be falling off.

Pep Guardiola made no changes for the second period, but his side came out revitalised. Julián Álvarez pulled one back and Erling Braut Haaland equalised soon after. By the 63rd minute, the hosts were in front thanks to Riyad Mahrez.

Mahrez put the dagger in late to seal what should have been a routine win on the balance of play but became a much more chaotic match.

Most importantly, Guardiola’s team came away with all three points.

The Coppa Italia is perhaps one of the least exciting cup competitions in terms of upsets due to its format, which drops the top eight teams right into the round of 16.

Therefore, it is very rare to see a lower-tier team take down one of the big teams, but we sometimes see lower-table Serie A teams pulling off shock victories.

That was exemplified this week when two teams at either end of the Serie A table squared off. League-leaders Napoli had tasted just one domestic defeat this season going into this match, whereas Cremonese were still winless in the league. They had changed managers just before this game as Massimiliano Alvini went out and Davide Ballardini replaced him.

Of course, we did not see much of a stylistic difference in the visitors’ performance in this match as they found themselves doing a lot of defending. They scored first through Charles Pickel, but went into the half-time break trailing after conceding twice in quick succession.

It seemed Napoli were on course for a routine victory, but they could not build up a cushion. That proved quite costly as ex-Roma youngster Felix Afena-Gyan equalised in the 87th minute, taking the game to extra time. There was another twist to come as Cremonese had a player sent off in the 100th minute, but they managed to keep the scoreline at 2-2.

The match was to be decided on penalties, where everyone bar Stanislav Lobotka scored their attempts. With that, Cremonese progressed to the quarter-finals of the Coppa Italia for the first time since the 1996/97 season.

We also had the round of 16 of the Copa del Rey in Spain this week, which only really had one notable upset.

It was a pretty significant one, as it saw the defending champions eliminated. Real Betis seemed to be edging a close match as the fourth official’s board went up to indicate stoppage time at the end of 90 minutes, but moments later, David García equalised to take the match to extra time.

Betis took the lead again in the 103rd minute, but they were pegged back soon after that by David García’s namesake Rubén. So, we were off to penalties in this match as well.

The first five spot-kicks went in, but Real Betis then missed their next two, so Osasuna prevailed to extend their cup run in what has been an outstanding season so far.

They are not only in the Copa del Rey quarter-finals for the first time in 13 years but are also up in 7th and challenging for a European spot in the league.

There was a full round of league fixtures in midweek in Belgium, much to the irritation of many fans. Some, like Royal Antwerp’s supporters, displayed their displeasure by not turning up to watch their team play.

The Anderlecht faithful did not get a chance to do that, as they were serving a stadium ban earned after some supporters’ actions caused their away match at Standard Liège to be abandoned. So, their side welcomed relegation battlers Zulte Waregem into an empty Lotto Park.

Zulte are the only side in the bottom half of the Pro League not to change head coaches midway through the season, and that faith in M’Baye Leye finally seems to be paying off. They have now won three of their last four matches in all competitions, including this frantic match.

The visitors struck first through Zinho Gano, but a quickfire brace from Benito Raman saw Anderlecht lead at half-time. It seemed the hosts were set to get their first win in three games, but Zulte struck twice in the second half through Alioune Ndour and Alieu Fadera to come away with all three points in Brussels.

This result takes Zulte up to 16th place and just one point from safety, whereas Anderlecht sink lower into the bottom half of the table. The record 34-time Pro League champions have a five-point gap to their opponents from this match, so they could find themselves in a relegation battle at the end of the season.

There was some headline-grabbing friendly held in Saudi Arabia, but make no mistake, the biggest match played in the Middle East this week was the Gulf Cup final.

Hosts Iraq, who eliminated favourites Saudi Arabia in their group and then took down Qatar in the semi-final, were playing their first final of this tournament in a decade. They were up against Oman, who they had drawn with in their group.

This was the first tournament Iraq were hosting since 1979 and the first competitive international matches played in the country this 2001, so it was very special.

The superb performance of the home team only made it all the more memorable for the fans, but there were some distressing scenes before the final.

On the morning of the match, there was a stampede outside Basra Stadium which caused deaths and injuries. Our thoughts go out to all those affected.

There were questions over whether the match might be postponed, but ultimately things went on as scheduled. Iraq opened the scoring in the 24th minute and seemed to be holding on pretty well, but a last-gasp penalty awarded in the 10th minute of stoppage-time allowed Oman to equalise and take us to extra time.

The hosts scored what many thought was a late winner from the spot in the 116th minute, but there was much more drama to come. Oman equalised with just over 60 seconds left on the clock, but the match did not go to penalties as Iraq found a winner in the 122nd minute!

So, Iraq lifted their first trophy in 16 years and first Gulf Cup in 35 years on a bittersweet day in Basra.

🇩🇪 Germany: RB Leipzig vs Bayern Munich (Friday, 19:30 UTC)
The German Bundesliga returns after the winter break with a big match, as defending champions and league leaders Bayern Munich face RB Leipzig, who are six points behind them in third place.

🇳🇱 Netherlands: Feyenoord vs Ajax (Sunday, 13:30 UTC)
De Klassieker is a big match at any time in the Netherlands, but the stakes are even higher this time because both sides are seriously competing for the title for the first time in six years. Feyenoord are first and have a five-point lead over Ajax, who will be keen to end their run of five Eredivisie matches without a win.

🏴󠁧󠁢󠁥󠁮󠁧󠁿 England: Arsenal vs Manchester United (Sunday, 16:30 UTC)
After their respective derby successes last weekend, Arsenal and Manchester United will face each other on Sunday afternoon to see who can preserve their momentum. There was talk about United being in the title race after their last win, but perhaps this match might decide things as nine points separate the two sides at the moment.