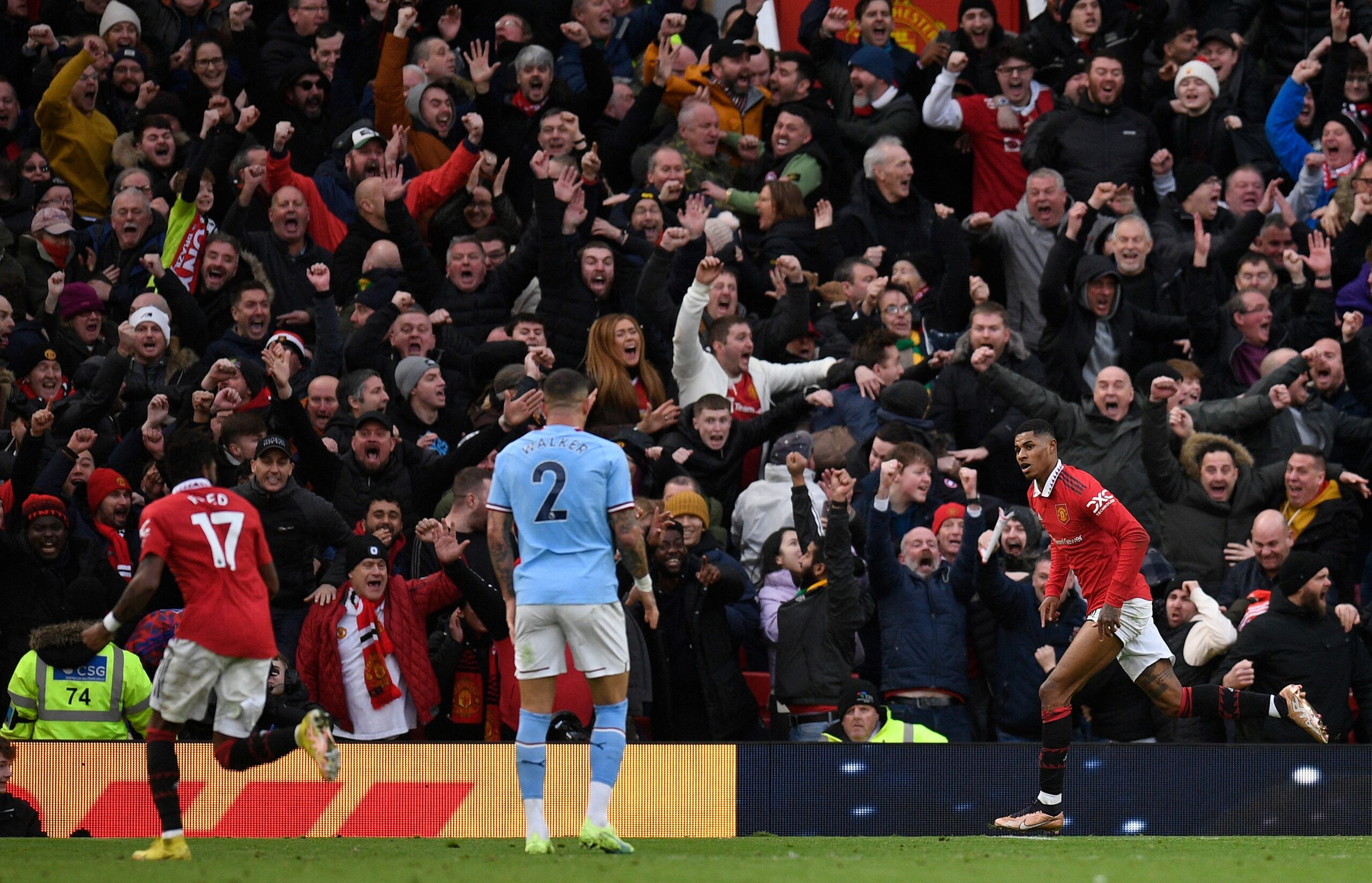 Manchester United claimed the bragging rights from the derby, coming from behind to defeat local rivals Manchester City on Saturday.

The hosts had the better of a goalless first half, coming close on three occasions to taking the lead. The first attempt of the game came when Bruno Fernandes got on the end of Christian Eriksen’s pass, but he could only drag wide from a tight angle.

Shortly afterwards, the Englishman went in on goal again from Eriksen’s through ball, but the chance was smothered by Ederson.

The away side were far from their best in the opening 45 minutes, finding themselves limited to half-chances. Their best effort came just seconds before the whistle, as Kyle Walker’s long-range strike flew just past the post.

But the Cityzens came out stronger after half time and managed to get themselves in front. Kevin De Bruyne worked his way into the box and clipped a cross for Jack Grealish to nod in from close range just seconds after coming on.

It seemed as if Man City were in control going into the closing stages, but they were pegged back in controversial fashion. Casemiro’s through ball was left by Rashford for Fernandes, who finished into the bottom corner to level the scores.

The visiting players protested that Rashford was offside, but the officials determined that he was not interfering with play.

And this proved to be a turning point in the match, as the Red Devils grabbed a winner in the final ten minutes. Second-half substitute Alejandro Garnacho played a low cross to the near post, which was turned in by Rashford.

Man City pushed for an equaliser late on but were unable to find a way through. They had a late shout for a penalty when Erling Haaland went down under a challenge from Casemiro, but the appeal was waved away.

The victory takes Man Utd into third in the league, just one point behind their opponents. As for City, they missed the chance to close the gap on league leaders Arsenal.

David de Gea (5/10) – Didn’t make a save, although couldn’t be blamed for the goal. Kicking was erratic.

Raphael Varane (7/10) – Repelled most of what was thrown at him. Handled Haaland well.

Tyrell Malacia (7/10) – Not always great on the ball, but ran relentlessly and battled hard.

Casemiro (8/10) *MOTM* – Delivered another fine performance in the middle of the park. Broke up several Man City attacks and provided composure in midfield.

Fred (7/10) – Best player on the pitch in the first half. Tailed off a bit after the break but recovered.

Christian Eriksen (6/10) – Played a couple of good passes in the first half. Struggled after the break before being substituted.

Marcus Rashford (7/10) – Got into some great positions in the first half, but was wasteful. Netted a late winner.

Anthony Martial (5/10) – Lost most of his battles against Akanji. Substituted at half time.

Ederson (5/10) – Made one good save to deny Rashford in the first half. Had a couple of nervous moments.

Kyle Walker (5/10) – Unlucky with a long-range effort in the first half. Allowed too much to come down his side.

Nathan Ake (6/10) – Had a mixed game. Perhaps could have done more to stop Garnacho’s cross for the winner.

Rodri (7/10) – Good in midfield for the most part. Helped keep Eriksen quiet.

Kevin De Bruyne (7/10) – Found himself frustrated in the first half, but grew into the game. Got himself a wonderful assist.

Riyad Mahrez (5/10) – Did little in the final third. Mostly stopped by Malacia.

Erling Haaland (4/10) – Found himself having to drop deep to get touches on the ball. Never looked like scoring.

Phil Foden (5/10) – A couple of nice touches but otherwise quiet. Substituted early in the second half.