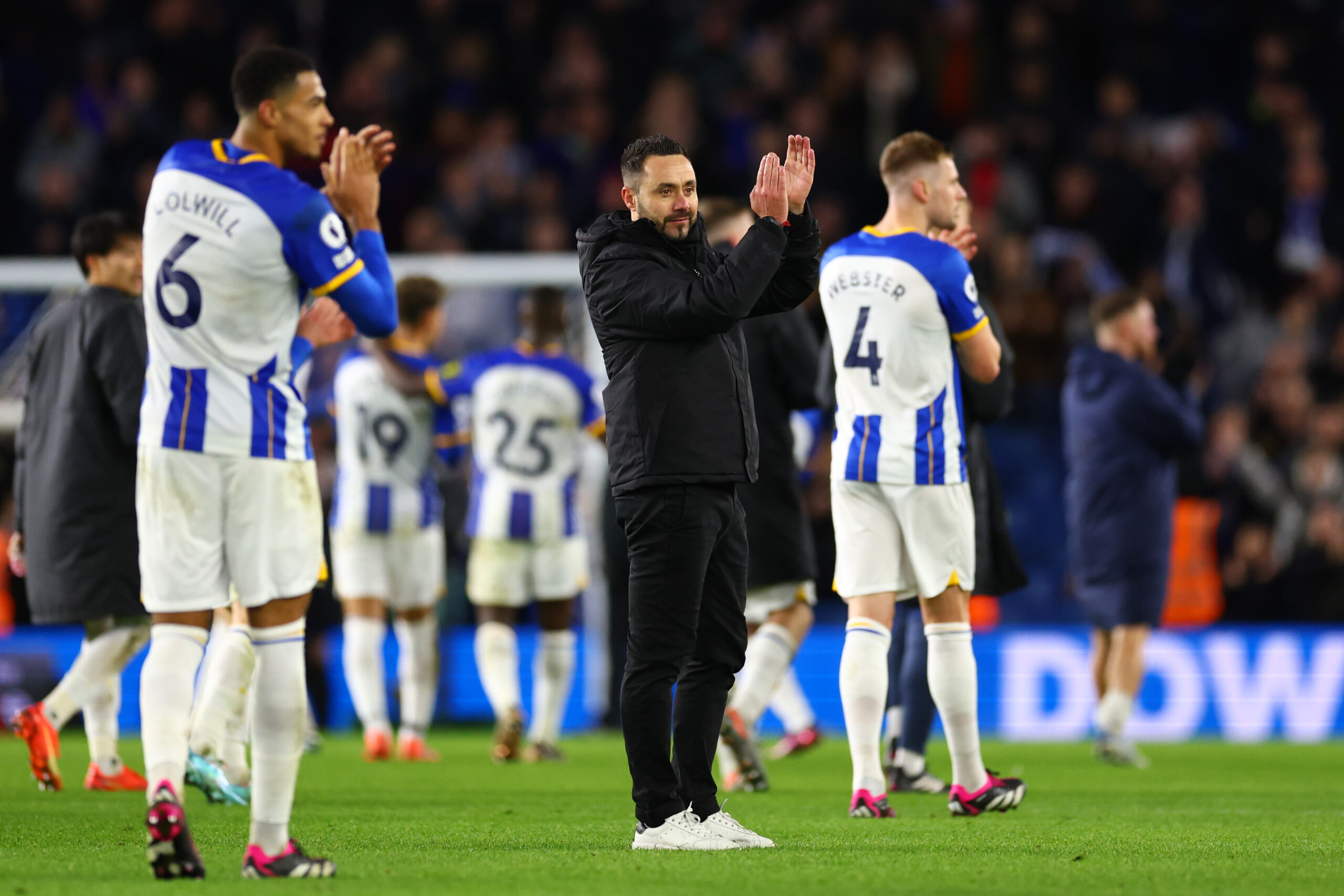 The Seagulls have been in red-hot form since the calendar year flipped to 2023, following up a 4-1 league routing of Everton with an equally emphatic 5-1 win over second-tier Middlesbrough in the FA Cup.

However, they were pre-match favourites on both occasions, unlike today, when they had to downplay the odds to solidify their unlikely Premier League top-four charge.

Unfazed by the intimidating presence of Liverpool’s new-look frontline featuring Mohamed Salah and Cody Gakpo as they asserted control from the get-go.

Roberto De Zerbi’s men enjoyed more possession and had numerous decent chances to break the deadlock in the opening 45 minutes, but the finishing touch often let them down.

Brighton first came knocking on Liverpool’s door through Solly March only eight minutes into the game, yet Trent Alexander-Arnold made a last-gasp clearance to avert the danger after Alisson failed to react.

It was a sign of things to come. The hosts used Jurgen Klopp’s famous ‘gegenpress’ against his side, preventing the Reds from playing from the back while trying to hurt them mostly on the right through Kaoru Mitoma.

The Japanese forward dominated Alexander-Arnold through and through, twisting and turning around the box, but unfortunately for the Seagulls, without an end product.

It was all Brighton in the first half and they came close to reaping the reward for their trouble in the 41st minute as Alisson brought March down to the ground inside the box.

Although referee Darren England immediately pointed to the spot, he overturned his initial decision for offside in the build-up play following an intervention from the VAR room.

Brighton didn’t care about that setback and continued to mount pressure, with talented youngster Evan Ferguson failing to convert a clear-cut opportunity on the stroke of half-time.

Liverpool’s only hope of scoring before the break was a faint penalty shout midway through the first half, but Seagulls goalkeeper Robert Sanchez first got the ball before bringing Salah to the ground.

Klopp’s team weathered the storm in the first half. However, instead of bouncing back after the interval, the Reds rolled over at the start of the second 45 minutes.

Less than two minutes into the second half, Mitoma slipped Alexander-Arnold’s mark and delivered a pinpoint assist to March, who had no trouble beating Alisson from point-blank.

De Zerbi’s men found a well-deserved opening goal but refused to settle for a narrow lead, with March stealing the show again.

The 28-year-old picked up the ball at the edge of the box, unleashing a bullet of a shot from a tight angle to beat Alisson to the far post and put clear daylight between the sides.

Not even a two-goal deficit was enough to wake up Liverpool, who looked out of steam and idea, even though Klopp tried to shake things up by making a quadruple change in the 69th minute.

While the German’s substitutions failed to pay dividends, De Zerbi’s ‘joker’ Danny Welbeck had a massive impact from the bench.

The former Manchester United striker entered the fray midway through the second half and repaid his manager’s trust by scoring his first Premier League goal of the second to kill the game off in the 82nd minute.

Brighton have now leapfrogged Liverpool into eighth, reducing the gap on fourth-placed Newcastle United to five points, while the Reds must rally their troops unless they’re to crash out of the Champions League race at the halfway point of the season.

Robert Sanchez (7/10) – Had to make two routine saves but showed composure with the ball at his feet.

Pascal Gross (8/10) – Despite being played out of position, looked comfortable against Alex Oxlade-Chamberlain as a makeshift right-back.

Lewis Dunk (7/10) – Picked up an early booking for a silly challenge up front. Barely put his foot wrong otherwise.

Levi Colwill (7/10) – Another rock-solid performance from the Chelsea loanee. Never lost sight of Salah and was comfortable with his side building from the back.

Pervis Estupinan (7/10) – You won’t find his name in the stats column today, but the Ecuadorian was an omnipresent figure on both sides of the pitch.

Alexis Mac Allister (6/10) – Seemed a bit rusty in the opening stages. Grew into the contest as the game progressed.

Kaoru Mitoma (9/10) – His blistering pace and fancy footwork were too much to handle for Alexander-Arnold. Made an assist and looked dangerous every time he had the ball.

Adam Lallana (6/10) – Could have done better on several occasions, but a lack of speed and determination saw him surrender possession when Brighton had numbers in the attacking third.

Solly March *MOTM* (10/10) – There’s not much you can ask from a forward. A scoring brace, coupled with one assist, sums up his match-winning performance.

Even Ferguson (6/10) – Slotted in for Leandro Trossard as a lone striker. Spurned a couple of presentable opportunities to solidify his place in De Zerbi’s starting XI.

Alisson (5/10) – Thwarted every shot coming his way in the first half. Let down by his teammates after the break.

Trent Alexander-Arnold (2/10) – Apart from his early goal-line clearance, the English right-back had an afternoon he will want to forget as soon as possible.

Joel Matip (2/10) – Without Virgil van Dijk to watch his back, the Cameroonian’s flaws came to light.

Ibrahima Konate (3/10) – Not as sloppy as his defensive partner but was still caught napping on more occasions than he would’ve wanted.

Andy Robertson (2/10) – It’s hard to remember his effort to influence the game on the opposition half. Looked equally disappointing at the back.

Jordan Henderson (2/10) – Liverpool never had a chance in this game as their captain lost virtually every midfield combat. Not to mention his wayward passing.

Fabinho (3/10) – Not one of his most memorable days in the Red shirt. Useful in winning back the ball but clueless when in possession.

Mohamed Salah (3/10) – One woeful touch after another, the Egyptian was a shadow of his former self at the Amex.

Cody Gakpo (1/10) – Tearing apart defences in the Eredivisie is one thing but doing that in the Premier League requires a whole new level. Had to learn that the hard way.