Southampton stun City, a new beginning for Nice, the magic of the KNVB Cup & more 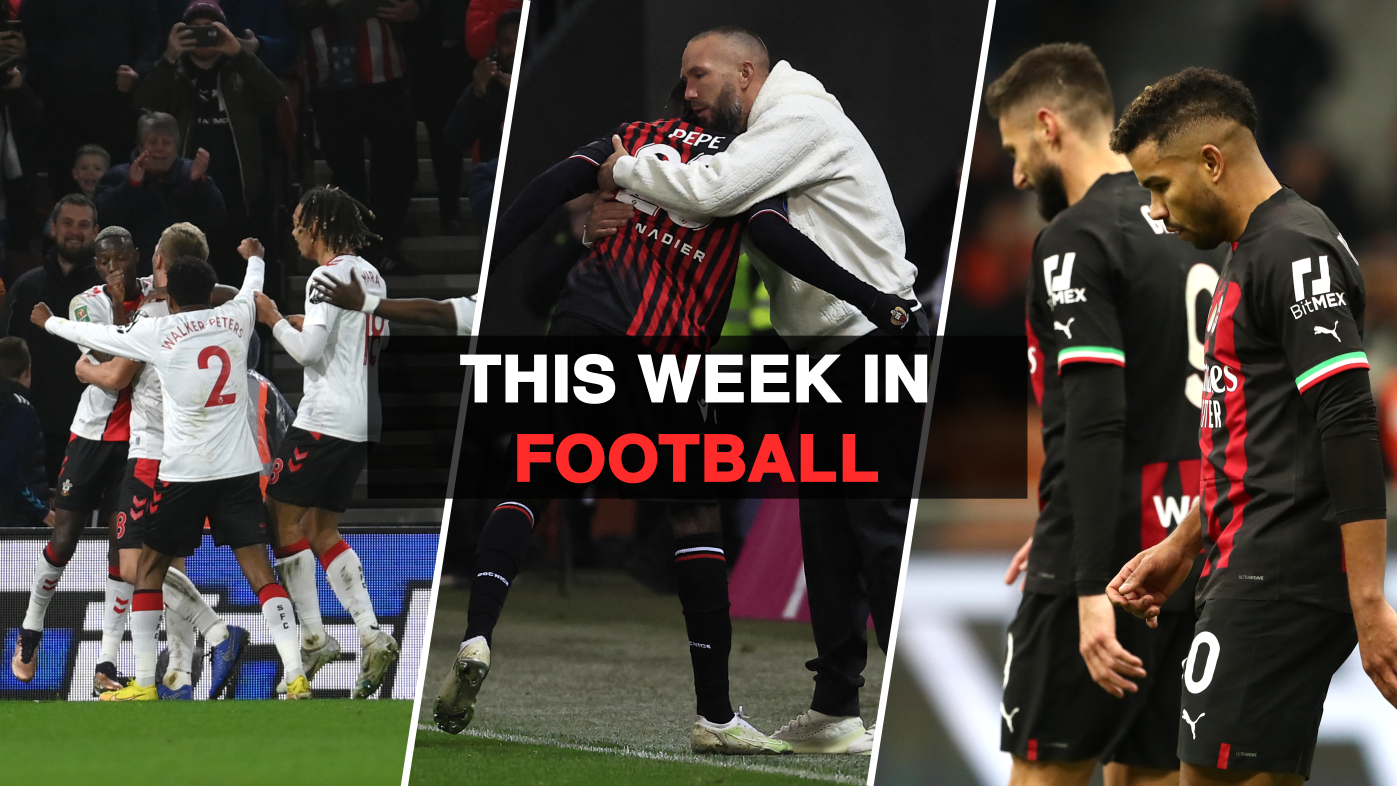 Various cup competitions took centre stage across Europe this week, which means there are quite a few Cupsets for us to discuss.

We will review some of them in this edition of This Week In Football.

Eight-time EFL Cup winners Manchester City had their four-season streak broken last time out, so they were keen to get this trophy back again.

Having beaten Chelsea and Liverpool en route to the last eight, they might have felt that Premier League strugglers Southampton would not be their toughest opponents.

Pep Guardiola, who was unbeaten as a coach in domestic quarter-finals after 14 such matches, named a pretty rotated XI with some surprises, such as Kyle Walker at right centre-back.

The hosts went for a full-strength side, but the Premier League champions would still have been backed to beat them.

We were in for a surprise, as Southampton took the lead 23 minutes in after a well-worked goal that saw Sékou Mara brilliantly turn in Lyanco’s low cross.

Five minutes later, they were two goals to the good, as Moussa Djepeno sent a curler to the top corner from about 30 yards out, catching Stefan Ortega too far off his goal line.

While these defensive lapses did prove costly for City, the main problem was the fact that their attack simply was not firing. Despite keeping close to three-quarters of possession, they could only attempt seven shots and failed to register any attempts on target.

So, Southampton went through to the semi-finals of the Carabao Cup, where they will face Newcastle United. The other match sees Nottingham Forest take on Manchester United for a place in the final on February 26.

In the midst of all the cup ties, there was a full round of Ligue 1 fixtures in France on Wednesday, so we have a lot to choose from.

Our pick is Nice’s thrashing of Montpellier, which was the club’s first match after the sacking of Lucien Faivre, who was shown the door after losing to third-tier Le Puy in the Coupe de France last weekend.

This game also marked Didier Digard’s first senior match as a head coach, although he is only in the role on an interim basis at the moment.

Digard ditched the 3-4-3 system that Faivre had been using after the World Cup break and moved to a 4-3-3 formation, which clearly yielded big rewards here.

The majority of the goals came from players with English connections as Arsenal loanee Nicolas Pépé’s brace was matched by Ross Barkley off the bench. Welshman Aaron Ramsey got an assist, while the other scorers were Khéphren Thuram and Andy Delort.

This win just about takes Nice back into the top half of the table, but they are sure to face tougher tests in their upcoming matches against Reims, Lille, Lens and Marseille.

The Coppa Italia perhaps is one of the least exciting cup competitions in terms of upsets due to the nature of its format, which parachutes the best teams straight into the round of 16.

Half of the round’s games were held this week, and we did get one shock result as Serie A champions AC Milan were sent packing by Torino.

On the face of it, this does not seem a huge upset as Torino are doing fairly well in the league this season as they currently have a spot in the top half of the table, so what made this win special was the nature of their victory.

Having contained their opponents pretty well, the visitors would have felt really disappointed when Koffi Djidji picked up a second yellow card in the 70th minute, leaving his side a man down. It was all Milan thereafter, but they could not prevent the game from going to extra time.

Play continued to follow a similar pattern, but the big twist came in the 114th minute when substitute Michel Ndary Adopo got his first senior goal for Torino, set up by fellow Frenchman Brian Bayeye’s first assist for the club.

With that, Milan have been eliminated from the Coppa Italia’s round of 16 for the first time since the 2008/09 season.

Perhaps the biggest ‘Cupset’ of the week came in the Netherlands, where third-tier amateur outfit SV Spakenburg advanced to the round of 16 by getting the better of Eredivisie team FC Groningen away from home.

They did so in the 90 minutes of normal time, which were all played 11-versus-11, so there was no major element of fortune in their victory.

The visitors scored twice in the first half and built up a three-goal lead by the 70th minute, including two penalties from Floris van der Linden. Groningen looked to stage a comeback late on as substitute Damil Dankerlui bagged a brace, but Spakenburg just about held on for the win.

Most impressively, they were not the first third-tier side to knock out a top-flight team in this round. Earlier, De Treffers did the same to Cambuur.

Katwijk also progressed against lower-tier opposition, which means there are as many Tweede Divisie sides left in the KNVB Cup as Eerste Divisie sides.

We also have an international Cupset to discuss this week, as one of the Gulf Cup favourites have been sent home after the group stage.

This was not the Saudi Arabia side that shocked eventual World Cup champions Argentina as only one member of that squad is playing in this tournament and the team is being coached by Saad Al-Shehri, whose main role is to manage the under-23s. Still, they were expected to seriously challenge for the title and certainly get past the group stage at least.

However, their 2-0 defeat to hosts Iraq in a waterlogged pitch on a rare rainy day in the region put the cat amongst the pigeons. Still, the equation was simple enough for them – beat Oman on the final matchday and advance to the knockout stage.

Saudi Arabia conceded first, and although they equalised quickly, a draw would not be enough for them. As they pushed for a winner, Oman delivered a sucker punch in the 84th minute, booking their spot in the semi-final and sending the Saudis packing.

🇮🇹 Italy: Napoli vs Juventus (Friday, 19:45 UTC)
There is a massive Friday night game in Serie A, as first play second when Napoli host Juventus. The Partenopei are seven points clear at the top of the table, but the visitors come into this match on the back of an eight-match winning streak without a single goal conceded.

🏴󠁧󠁢󠁥󠁮󠁧󠁿 England: Arsenal vs Chelsea (Sunday, 12:00 UTC)
There are a couple of big derbies in the Premier League involving the title contestants, but over the WSL, the top two are going head-to-head. Defending champions Chelsea have a three-point lead over Arsenal, but they have played one more match, so there is almost nothing to separate the two sides at the moment.

🇵🇹 Portugal: Benfica vs Sporting (Sunday, 18:00 UTC)
The Derby de Lisboa takes centre stage in Portugal this weekend, as league-leaders Benfica host Sporting, who are down in 4th place with a 12-point deficit. Roger Schmidt’s side are seven points clear of the chasing pack at the moment, and they will be keen to preserve that advantage.

🇪🇸 Spain: Real Madrid vs Barcelona (Sunday, 19:00 UTC)
The Spanish Super Cup final will be the first El Clásico of 2023. We don’t need to convince you to watch this.