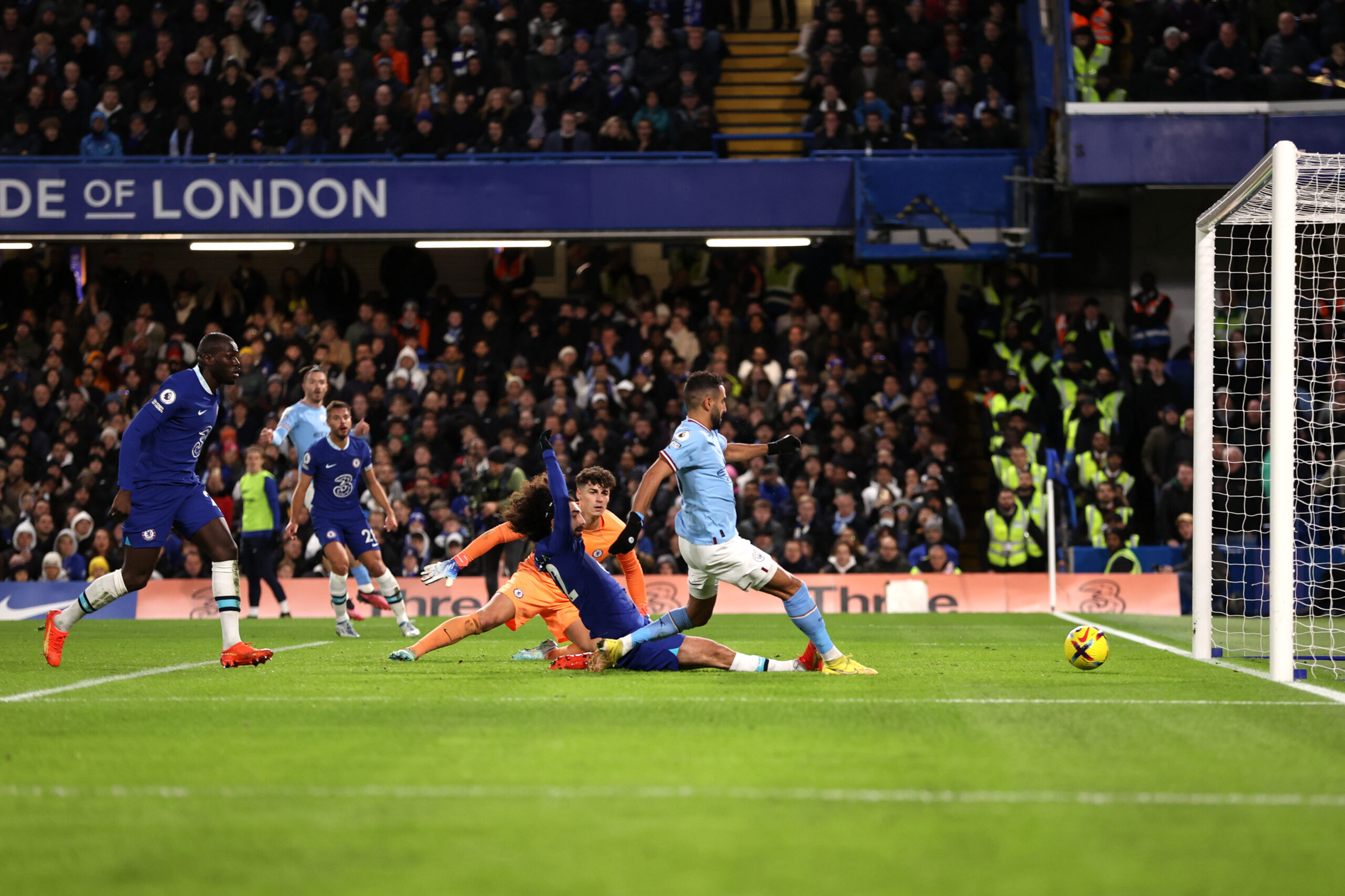 Manchester City picked up a huge three points against Chelsea in the Premier League this evening.

It was a fairly quiet first half at Stamford Bridge, marred by two early injuries for the hosts. Raheem Sterling was forced off after just five minutes with a hamstring problem, and Christian Pulisic was substituted shortly afterwards after a 50-50 with John Stones.

Erling Braut Haaland got his first sight of goal in the 38th minute, and it was an opportunity that he will have been disappointed not to have done better with. Ilkay Gundogan found the Norwegian with a pass, but he could only fire over from inside the box.

Shortly before half time, the Blues came within inches of taking the lead. Carney Chukwuemeka lined up an effort from distance, which struck the near post via a small deflection.

The Cityzens came out on top in the second half and twice came close to opening the scoring. Nathan Ake’s header crashed off the post, and Kevin De Bruyne’s low effort was saved by Kepa Arrizabalaga.

Down the other end, Chelsea had an opportunity to get themselves in front. Kai Havertz mis-controlled when well placed, and Thiago Silva had a shot deflected narrowly wide.

Then the decisive moment came, and it was Man City who got the goal. Just three minutes after coming on, Jack Grealish and Riyad Mahrez combined for the opener, with the latter tapping in at the back post from the former’s low cross.

Pep Guardiola’s side pushed for a second, but couldn’t create anything clear-cut. The closest they came to doubling their advantage came through Haaland, but he was unable to get a clean connection on De Bruyne’s cross.

However, they were hardly troubled at the back. Chelsea’s only notable chance to equalise came in injury time when youngster Lewis Hall blazed over after being found by Chukwuemeka.

It’s an important win for Man City, who close the gap on leaders Arsenal to five points. As for Chelsea, they remain in tenth place – ten points off the Champions League spots.

Kepa Arrizabalaga (5/10) – Rarely called upon. Arguably should have cut out Grealish’s cross for the winner.

Cesar Azpilicueta (6/10) – Defended fairly well, but offered next to nothing going forward.

Thiago Silva (7/10) – Handled the threat of Haaland well for the most part. Good on the ball.

Marc Cucurella (5/10) – Struggled one-on-one against Bernardo Silva and Mahrez. Let the latter go for the winner.

Mateo Kovacic (6/10) – Looked bright in the first half. Faded after the break.

Raheem Sterling (NA/10) – Substituted early on with an injury.

Kai Havertz (5/10) – Held the ball up well in the first half. Did very little in the second.

Christian Pulisic (NA/10) – Substituted early on with an injury.

Pierre-Emerick Aubameyang (4/10) – Anonymous while on the pitch. Substituted in the second half.

Carney Chukwuemeka (7/10) – Held his own well. Almost scored in the first half and created a good chance for Hall late on.

Ederson (6/10) – Made one fairly comfortable save in the first half from Ziyech. A spectator otherwise.

Kyle Walker (6/10) – Did well enough against Chelsea’s frontline. Substituted at half time.

Nathan Ake (7/10) – Solid at the heart of defence. Almost grabbed the opener early in the second half.

Joao Cancelo (5/10) – Got into a couple of promising areas but final ball was poor. Substituted at half time.

Rodri (7/10) – Helped dominate possession in the second half.

Kevin De Bruyne (7/10) – Far from his best, but grew into the game as time went on. Played a part in the winner.

Ilkay Gundogan (7/10) – Energetic and composed on the ball. Helped control the game after the break.

Bernardo Silva (6/10) – Gave Cucurella some problems down the right. Substituted on the hour mark.

Erling Haaland (5/10) – Linked up well, but didn’t have much joy in front of goal. Missed a good chance in the first half.

Phil Foden (4/10) – Very quiet in his time on the pitch. Substituted early in the second half.