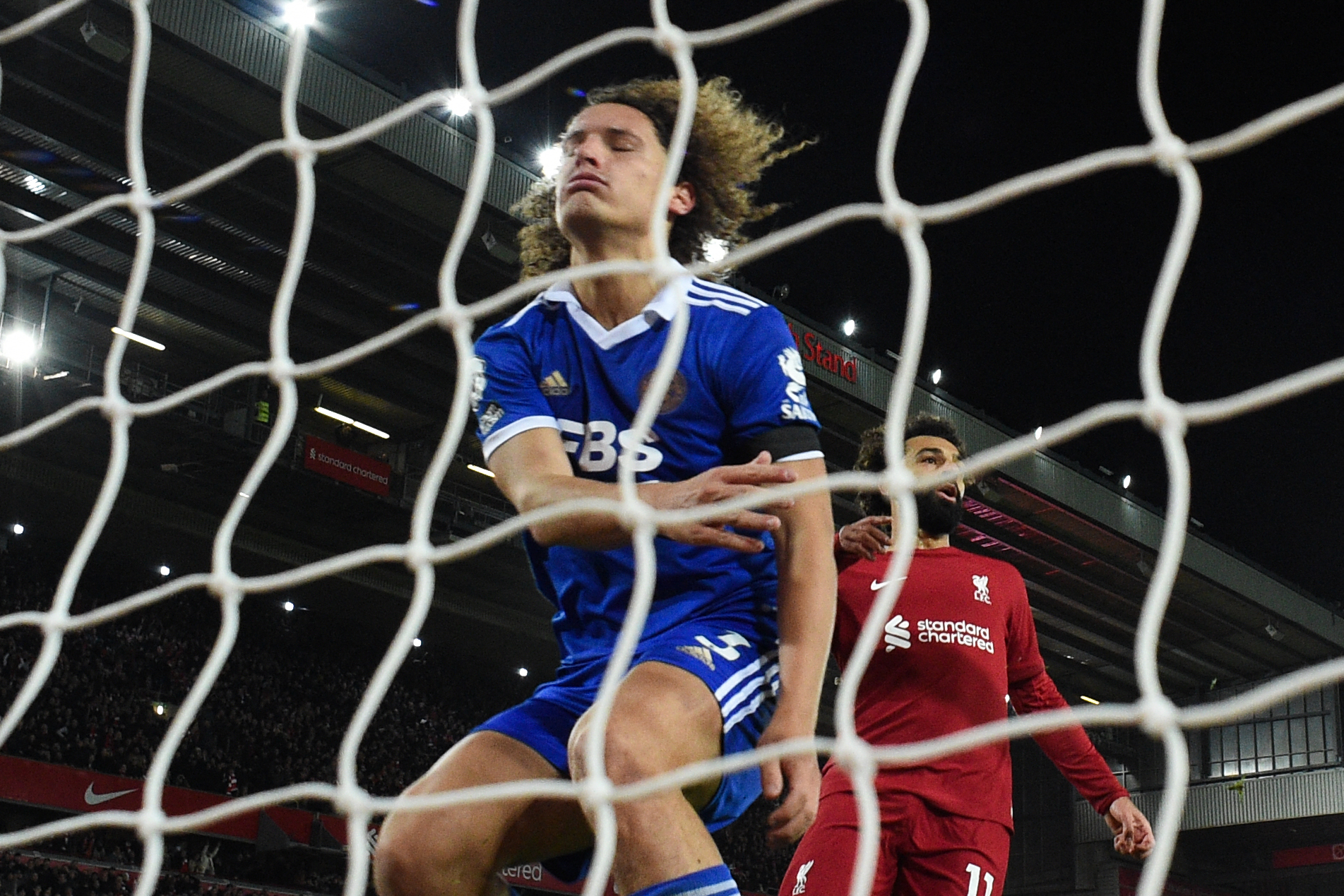 Jurgen Klopp’s side headed into proceedings riding on the crest of a purple patch, having won three consecutive league matches for the first time this season.

However, they couldn’t have hoped for a worse start to the game as Kiernan Dewsbury-Hall opened the scoring in the third minute, taking advantage of the Reds’ defensive sloppiness to put Leicester in front.

It took Liverpool 35 minutes of play to attempt their first shot on target. Despite taking control of possession and exchanging passes deep inside their visitors’ half, they struggled to create anything meaningful.

Although Mohamed Salah and Darwin Nunez found it hard to threaten Danny Ward’s goal, Leicester defender Wout Faes handed the hosts a helping hand. Not once, but twice.

Faes’ first own-goal was a stroke of bad luck, with the ball slicing his foot and leaving Ward helpless thanks to an awkward deflection to level the score in the 38th minute.

But there was no excuse for the Belgian defender’s wayward intervention on the stroke of half-time.

He should’ve averted the danger with ease instead of slotting the ball into his own net after Nunez’s attempt rattled off the woodwork.

Liverpool refused to settle for a slender-goal advantage, starting the second half on the front foot, with Jordan Henderson and Salah narrowly missing the bottom corner.

But Nunez’s series of inexplicable misses highlighted the second 45 minutes at Anfield. Heavily criticised for his woeful finishing, the Uruguayan gave his doubters more reason to make fun of him.

With Liverpool’s chances keep coming due to Leicester’s desperate attempt to restore parity, the £85m-rated star stole the show for all the wrong reasons.

Leicester’s ventures forward faded as the match progressed, allowing the Merseyside heavyweights comfortably preserve their narrow lead and move up to sixth in the Premier League table.

The Foxes’ second consecutive league defeat means they are on the verge of being drawn back into a dreaded relegation fight, with 18th-placed Wolverhampton Wanderers only four points adrift.

Alisson (6/10) – Had very little to do after conceding early on but kept his nerve to stop Barnes’ shot and help Liverpool come out on top.

Trent Alexander-Arnold (6/10) – Despite going toe-to-toe with lightning-fast Barnes for most of the night, his woeful crossing highlighted an uneventful attacking display from the offensive-minded right-back.

Joel Matip (5/10) – Another one of those nights for the Cameroonian defender who looked uncomfortable with the ball at his feet after letting Dewsbury-Hall round past him effortlessly.

Virgil van Dijk (7/10) – Far more reliable than his centre-back colleague, the Dutchman did his part in helping the Reds build from the back with his hallmark composure.

Andy Robertson (5/10) – Though he experienced a troublesome start to the game, missing his crosses by some margin, he made up for his wayward attacking showing with plenty of running at the back.

Jordan Henderson (4/10) – Maybe it’s time for Klopp to play his captain in the cup matches. Out of steam and idea, the England international barely had a move worth mentioning.

Harvey Elliott (4/10) – Another Liverpool midfielder who had a night to forget, the youngster looked up the creek without a paddle from the first whistle.

Thiago Alcantara (7/10) – While his inability to sustain physical battles in the Premier League, the Spaniard remains the only reliable playmaker at Klopp’s disposal, as evidenced by his impressive passing ratio tonight.

Alex Oxlade-Chamberlain (3/10) – Luis Diaz’s recovery could not come soon enough as the injury-prone Englishman is no longer in shape to threaten anyone in England. May want to consider moving to MLS.

Mohamed Salah (5/10) – It’s hard to play harshly on the Egyptian for failing to get on the scoresheet alone, but this was not his night by any stretch of the imagination.

Darwin Nunez (5/10) – It’s all about running and opening spaces for his teammates for the Uruguayan right now, but when you pay around £85m for a striker, you expect him to score. That’s where the problem lies.

Danny Ward (5/10) – Looked uncomfortable from the get-go and failed to deliver any level of confidence from the back. Leicester must be kicking themselves for cutting Kasper Schmeichel loose.

Timothy Castagne (6/10) – While keeping things safe at the back for a large portion of the game, the right-back only sporadically dared to push forward.

Daniel Amartey (4/10) – He wasn’t the one to score two own goals, but he didn’t provide much safety either.

Wout Faes (1/10) – A nightmarish evening for the Belgian went from bad to worse in less than ten minutes. No doubt at whom Leicester fans will point fingers tonight.

Luke Thoms (5/10) – Dealing with Salah’s blistering pace is never a straightforward task but did a solid job keeping the left-footed forward away from the scoreboard.

Boubakary Soumare (5/10) – It’s hard to count the number of fouls he committed at Anfield without being booked. Yet he was a waste in Leicester’s bid to build from the back.

Wilfried Ndidi (5/10) – Like his abovementioned teammate, did all the dirty work in the middle of the park but struggled to come up with anything meaningful when in possession.

Kiernan Dewsbury-Hall (7/10) – The only Leicester midfielder capable of distributing the ball around the pitch with purpose. Plus, he scored a phenomenal solo goal to break the deadlock.

Ayoze Perez (6/10) – Not one of his best in-play performances, yet his set-piece deliveries were spot-on. Too bad his teammates failed to capitalise on any of them.

Harvey Barnes (5/10) – Frightening pace to chase down the flank was overshadowed by the winger’s poor decision-making and lacklustre finishing.

Patson Daka (NA/10) – Such a shame he picked up an injury after just 12 minutes of play.

Jamie Vardy (5/10) – Despite timing his runs well and looking sharp since coming on early in the game, the veteran failed to put Alisson to the test.