Haaland hits 20, Mbappé returns for PSG and what to watch this weekend 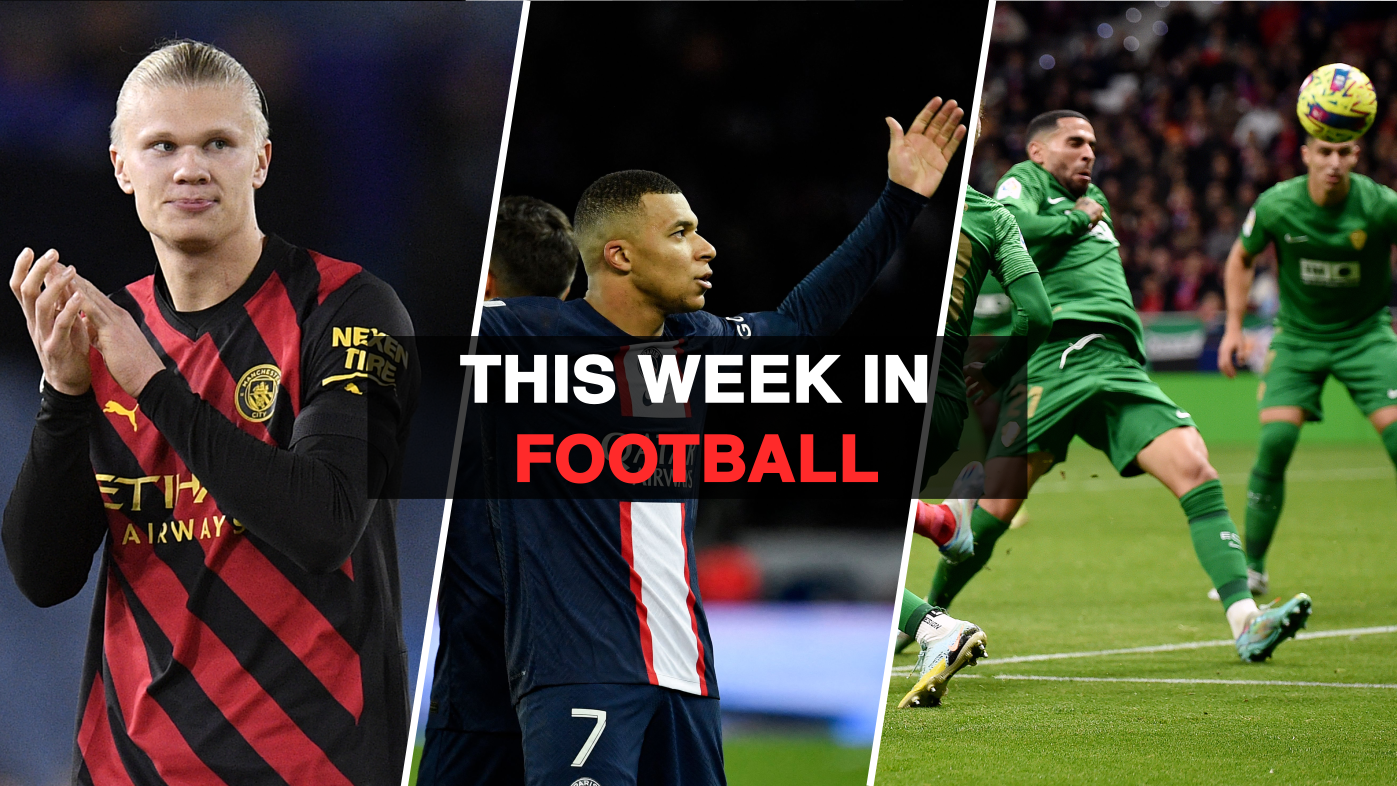 A number of top-flight European leagues returned to action this midweek after their World Cup breaks, so we had lots of football to watch.

Here are five major results and storylines from all the action around the world:

Defending champions Manchester City returned to Premier League action with a trip to face Leeds United, who just had a two-point buffer to the relegation zone before this match.

The match was always going to go one way — with City dominating possession and the home side defending a lot.

Leeds-born Erling Braut Haaland was on the end of a couple of big chances in the first half, but his failure to convert them meant that we looked set to be going into the break. In stoppage time, though, Rodri turned in a rebound after a saved shot, giving his side a deserved lead.

It did not take long for Haaland to get going in the second half. He scored his first in the 51st minute after being set up on a plate by Jack Grealish, and the two combined again for the Norwegian’s second in the 64th minute. With that, Haaland became the fastest to score 20 English Premier League goals, taking just 14 matches to do so.

A set-piece goal in the 73rd minute proved to be little more than a consolation for Leeds, but it mired what otherwise was a near-perfect performance from Pep Guardiola’s side.

This win took them back up to second, still five points behind Arsenal.

Ligue 1 returned on Wednesday with a host of fixtures, including a late-night visit to the capital for struggling Strasbourg.

Julien Stéphan’s side finished all the way up in sixth place last season but were down in 19th before kick-off. They would not have expected to take anything from the league leaders, even though PSG were without Lionel Messi. The visitors found themselves trailing just 14 minutes in after Marquinhos turned Neymar’s free-kick in.

There were quite some twists in the tale in the second. First, a deflected own goal from Marquinhos made the scores level. Then, just after the hour-mark, Neymar picked up two yellow cards in quick succession, the first for a hand in the face of an opponent and the second for simulation. At that point, it looked very likely that Strasbourg would come away with something from this game.

However, they were up against a man on a mission. Kylian Mbappé, who became the first player to score a World Cup final hat-trick and still lose just ten days ago, took matters into his own hands and eventually won a penalty in stoppage time, which he converted to win the game.

Heading into the World Cup break, there were just two winless teams in Europe’s top five leagues this season. One of those was Cremonese in Italy, and the other was Elche in Spain.

Despite their troubles, Cremonese have stuck with manager Massimiliano Alvini so far. Elche, on the other hand, have been hiring and firing like no tomorrow.

Between interim and ‘permanent’ head coaches, Pablo Machín was the fifth person to attempt to get a La Liga win for Elche when he took charge of his first league match against Atlético Madrid.

The first 45 minutes went fairly well as there were no goals scored, but in stoppage time, Gonzalu Verdu was sent off for a last-player foul.

Atlético kindly decided to restore parity early on in the second half when Mario Hermoso picked up a second yellow card, but just minutes later, João Félix scored the opener.

In the last few years, Atléti taking the lead would effectively spell the end of the match, but that has not been the case this season when their defence has looked much shakier than usual.

Álvaro Morata’s second goal was crucial, even though he was pretending to be injured on the floor when it went in and needed the goal to be described to him by his teammates.

For all their troubles this season, Atlético will go into the new year in the Champions League spots, while Elche are obviously rooted to the bottom of the table.

Over in Portugal, Casa Pia are enjoying their first season in the top flight in 83 years after winning promotion last season. The reason we say they are enjoying it is that they are way up in the European spots at the moment, placed as the best of the rest behind the top four clubs.

They consolidated their position on the other side of the World Cup break with a dramatic win over Portimonese thanks to a goal in stoppage time. It would be unfair to say that this was an undeserved result, though, as they outshot their opponents 19-6 over the course of the match.

Indeed, Casa PIa’s performances and underlying numbers have been quite impressive throughout the season, especially for a side that has not played at this level for so many decades.

Of course, they are overperforming their xGD (Expected Goal Difference), but deserve to be in the mid-table region by all accounts.

Whether Casa Pia can sustain these results and stay in contention for a European spot towards the end of the season remains to be seen but they look well on course to securing safety at this moment, so they will surely achieve their primary target.

The Chinese Super League was one of the best leagues in Asia in terms of quality for most of the 2010s, largely thanks to the immense spending power of many of its clubs which lured some big-name players and coaches to the country.

However, it is just about among the top 10 leagues in the continent now, as the COVID-19 pandemic has severely impacted both the foreign presence and more importantly funding at most clubs.

This is most evident at Guangzhou FC (formerly known as Guangzhou Evergrande), who are most successful club in the country having won the league eight times in the 2010s, when they also went on to win two Asian Champions Leagues. They finished third last season but found themselves in an existential crisis at the end of it amidst owners Evergrande’s debt crisis.

Guangzhou FC ended up losing all of their foreign players as well as head coach Fabio Cannavaro, but their financial troubles meant that they could not spend a single penny on transfer fees (they were struggling to pay salaries). So, they had to go into the 2022 season with a full domestic squad largely comprised of academy players.

That sudden and drastic change went about as well as you might imagine, so Guangzhou FC’s relegation has been confirmed in the penultimate round of fixtures of the season this week with a comprehensive loss to Changchun Yatai. Wuhan Yangtze River and Hebei FC have been relegated alongside them, with both having been penalised with points deductions due to unpaid salaries.

We’ll be in a new calendar year on the other side of the weekend, but that will not stop the football. Here are a few big matches to watch:

🇵🇹 Portugal: Braga vs Benfica (Friday, 21:15 UTC)
The Liga Portugal is back, and the headline fixture of this round is set to be played later tonight. League-leaders Benfica, who are unbeaten with 12 wins from 13 games, make the trip to Braga to face the side placed in third in the table, just a point off the defending champions.

🏴󠁧󠁢󠁥󠁮󠁧󠁿 England: Wolverhampton Wanderers vs Manchester United (Saturday, 12:30 UTC)
Julen Lopetegui will make his Premier League home debut against Manchester United as Wolves attempt to escape the relegation zone heading into the new year, but they will need to cause an upset for that.

🇫🇷 France: Lens vs Paris Saint-Germain (Sunday, 19:45 UTC)
The big Ligue 1 match on New Year’s Day sees defending champions PSG visit Lens in a clash between the top two. At the end of this game, the Parisians could have a 10-point buffer at the top of the table if they win.

🏴󠁧󠁢󠁳󠁣󠁴󠁿 Scotland: Rangers vs Celtic (Monday, 12:30 UTC)
The first Scottish Premiership match of 2023 is a small matter — just the Old Firm derby. These matches are must-wins for both sides as it is, but for Rangers, this could be their last chance at posing a significant title challenge since Celtic have a nine-point lead over them at the moment.