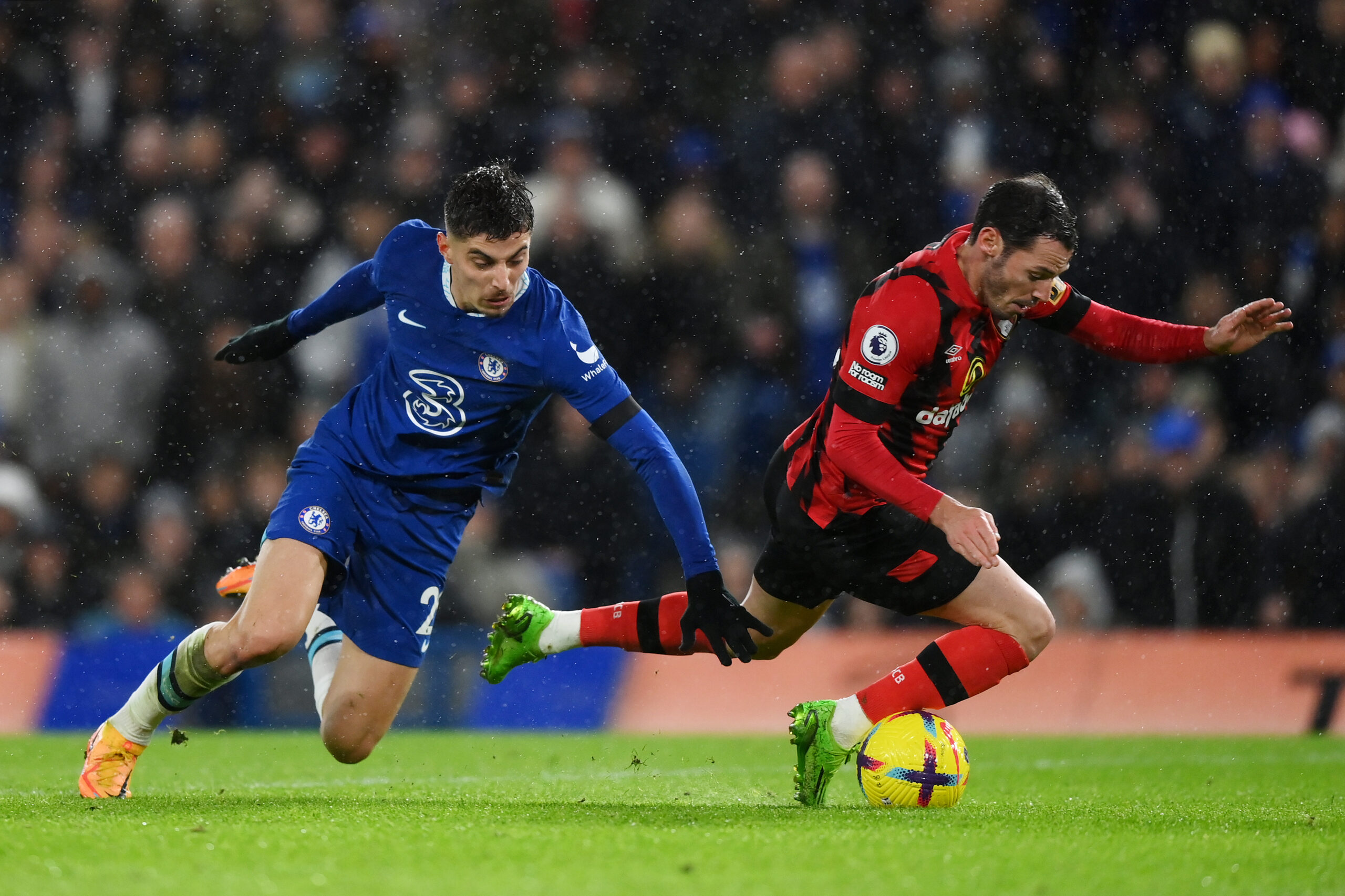 Chelsea returned to winning ways in the Premier League against lowly Bournemouth today, claiming a comfortable 2-0 victory at Stamford Bridge.

Graham Potter’s job was on the line before the World Cup break as the Blues lost three consecutive league matches in the lead-up to the Qatar showpiece.

However, the six-week hiatus helped the ex-Brighton & Hove Albion boss rally his troops and reinstate them as top-four challengers.

Not since 1993 had they been defeated four times on the trot, and Kai Havertz’s tap-in in the 16th minute showed they were in no mood to rewrite history.

Raheem Sterling evaded his marker on the right-hand side and whipped an inviting low ball in for the German striker to latch onto and put Chelsea in front early on.

The Blues refused to rest on their laurels after netting their first Premier League goal since October, moving forward in numbers in pursuit of a clear-cut cushion.

And the pressure paid off in the 24th minute. Havertz laid off a perfect assist to Mason Mount, who struck the ball first time from just outside the box into the bottom corner to double his team’s lead.

Slow to react after conceding twice in less than ten minutes, Bournemouth fell apart and almost conceded the third when Christian Pulisic slotted home a loose ball on the stroke of half-time.

Unfortunately for the United States star, his celebrations were short-lived as referee Simon Cooper disallowed his goal for a foul play in the build-up, handing the Cherries a glimmer of hope for the remainder of the game.

As expected, Potter’s men took their foot off the gas, allowing their visitors to put more bodies forward in a faint bid to claw their way back into the match.

Bournemouth boss Gary O’Neil hoped to turn his side’s fortunes around by introducing Jaidon Anthony at the expense of Jack Stacey at the break but to no avail.

Despite enjoying more possession after half-time, the Cherries failed to fashion a single meaningful opportunity in the front third. But to their credit, they limited Chelsea’s presence in front of Mark Travers’ goal.

Chelsea may have got back on the rails, but at what cost? Reece James’ first appearance since October, when he picked up a knee injury, ended painfully early in the second half.

The highly-rated right-back had to leave the pitch in the 53rd minute after feeling discomfort in his injured knee, with Cesar Azpilicueta taking his place.

Even without James, Chelsea looked dangerous occasionally, with Mount and Koulibaly coming close to putting a third goal on the board in the later stages.

Though they failed to extend their lead, the Blues recorded a vital victory to reduce the gap on fourth-placed Tottenham Hotspur to six points.

Bournemouth’s fourth defeat in five Premier League matches means they are now only three points clear of the drop zone.

Kepa Arrizabalaga (7/10) – Even though he didn’t have much to do, he looked reliable and composed, especially with the ball at his feet.

Reece James (7/10) – Before picking up an injury, he was an omnipresent figure in the front third, combining well with Sterling on the right side.

Kalidou Koulibaly (8/10) – Arguably one of his best performances since swapping Napoli for the Bridge in the summer. Barely put his foot wrong the whole night.

Thiago Silva (8/10) – Despite looking in discomfort early on, the Brazilian veteran forged a wall with Koulibaly, preventing Bournemouth from creating a single clear-cut chance.

Marc Cucurella (6/10) – Compared to James, he looked clueless despite winning possession numerous times, especially in the first half.

Jorginho (6/10) – While his short passes were accurate, he couldn’t find his attacking times with diagonal balls and looked tireless.

Mason Mount (8/10) – An almost-perfect display from the England international. Eventful and crisp with every touch, he scored a beauty.

Denis Zakaria (7/10) – Played his part in Chelsea’s second goal and ran the midfield down from the get-go, helping his side win the physical battle in the middle of the park.

Kai Havertz *MOTM* (9/10) – In addition to opening the scoring and assisting Mount for the second, he was instrumental to Chelsea’s attacking movements throughout the night.

Christian Pulisic (7/10) – Denied what would’ve been a morale-boosting goal but still provided a lively showing on the left wing.

Mark Travers (6/10) – Helpless in both situations leading to Chelsea’s goals but pulled off several decent stops to save some dignity for Bournemouth.

Adam Smith (4/10) – A troublesome night for the experienced right-back as Pulisic tore him apart time after time.

Marcos Senesi (4/10) – Unable to deal with Havertz’s pace, failing to get a telling touch to dispossess his opponents off the ball one too many times.

Jordan Zemura (5/10) – His first touch was often a complete waste but still managed to deal with Sterling one-on-one several times to save some pride.

Jack Stacey (3/10) – The fact O’Neil withdrew him at half-time probably best illustrates what type of night he had at the Bridge.

Lewis Cook (4/10) – While he cannot be accused of a lack of trying, his inability to orchestrate Bournemouth’s play cast a shadow on his combative display.

Jefferson Lerma (4/10) – Kept getting dragged wide and played as if he was in a back three rather than the midfield. Virtually invisible in Chelsea’s half.

Philip Billing (5/10) – Far more present in the build-up play than his fellow midfield colleagues but still struggled to influence the game, especially in those high-octane moments in the first half.

Dominic Solanke (5/10) – Perhaps the most determined Bournemouth player tonight, even though he didn’t find himself in a single presentable chance to beat Kepa Arrizabalaga.

Kieffer Moore (3/10) – Koulibaly’s strength and aerial presence turned this evening into a nightmare for the robust striker.