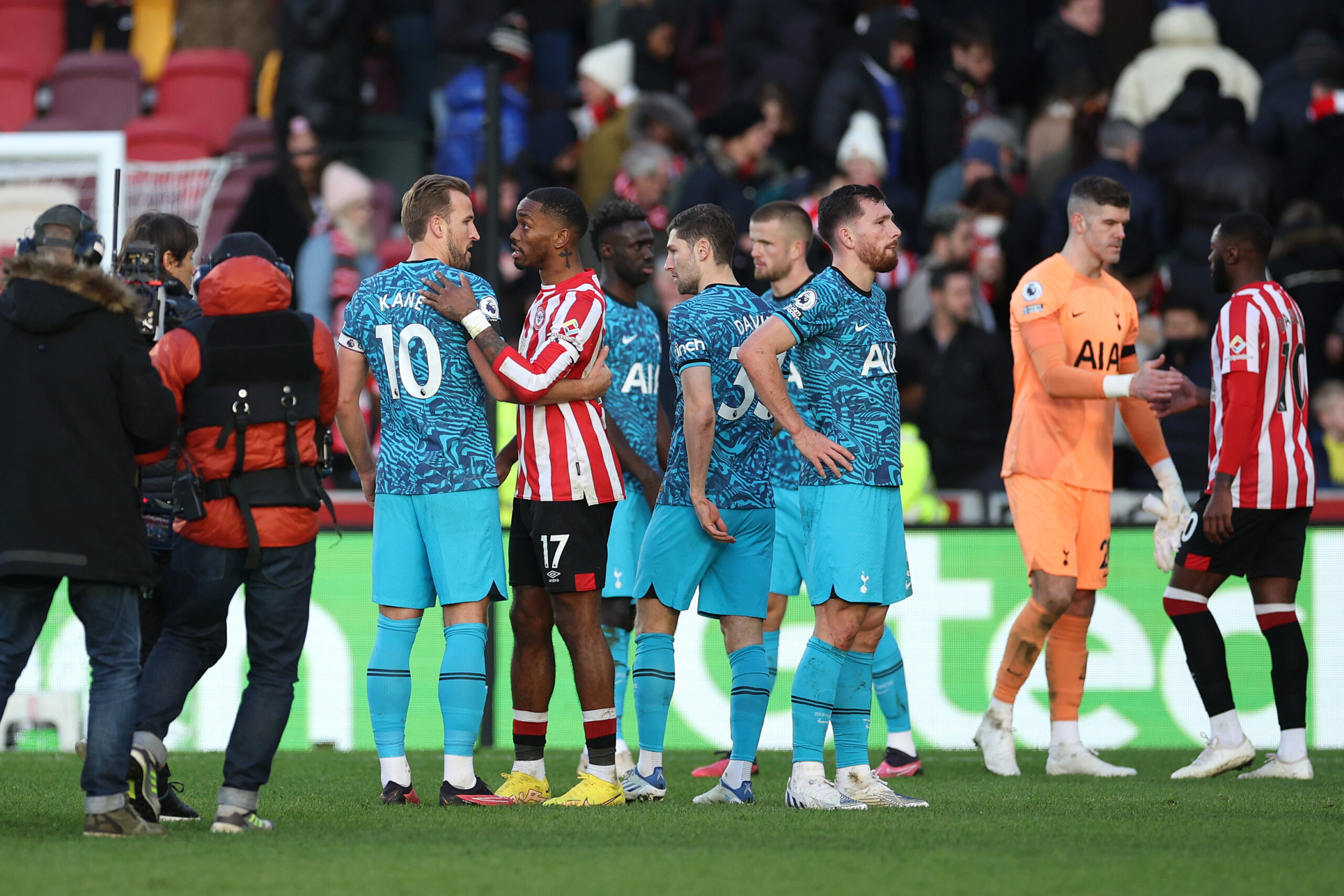 After 42 days of inaction due to the World Cup, the Premier League resumed with a clash between Brentford and Tottenham Hotspur on Boxing Day.

Both sides came out on top in their most recent league outings and headed into the London derby full of belief and confidence.

Thomas Frank’s men kicked off the game on the front foot and deservingly took the lead 15 minutes in when Vitaly Janelt tapped home from close range after Fraser Forster had parried Mathias Jensen’s deflected effort.

Having gone behind, Antonio Conte’s men started to exert themselves more and had their first real sight of goal on the half-hour mark as Heung-min Son tried his luck from distance.

Five minutes later, Brentford came close to getting on the scoresheet once again with Zanka forcing Fraser Forster into a save.

The Bees thought they had doubled their lead just before half-time, but Ivan Toney’s strike was chalked off thanks to the intervention of VAR.

However, there was no denying Toney nine minutes into the second period when a golden chance fell to him inside the box to make it 2-0.

In need of a lift, Spurs gained control of the game and halved the deficit thanks to skipper Harry Kane, who finished with aplomb from Clement Lenglet’s expert delivery.

Down the other end, Brentford threatened again through Bryan Mbeumo following an inviting cross from Rico Henry.

Mbeumo was made to rue his miss even more 71 minutes in as Pierre-Emile Hojbjerg restored parity in west London after the ball fell to him inside the area.

Buoyed by their equaliser, Spurs pushed for a winner and nearly snatched all three points five minutes from time, only for Kane to see his header crash onto the bar with David Raya well-beaten.

Toney had the final sniff at goal for his side, but he was unable to turn home Roerslev’s flicked header, thanks in no small part to some brilliant closing down from Forster.

As the game entered its final knockings, Tottenham launched one final assault but it wasn’t to be for the Lilywhites, who now look set to lose ground in the race for a top-four spot.

David Raya (6/10) – Made a couple of saves to ensure that his side came away from the game with something. Could not have done much better for the two goals he conceded.

Ben Mee (5/10) – A tad lucky not to have given away a penalty and was unusually suspect when contesting aerial duels, winning just one of six

Ethan Pinnock (5.5/10) – Completed a game-high 12 clearances but his passing often left a lot to be desired.

Mads Roerslev Rasmussen (5/10) – Had a torrid time against Ivan Perisic down the left as he struggled to cope with the Croatian.

Mathias Jensen (5.5/10) – Played his part for the opening goal but was guilty of giving the ball away on too many occasions before his substitution midway through the second period.

Christian Norgaard (6/10) – Another industrious display in the centre of the park which was capped off by an intelligent flick to Ivan Toney for 2-0.

Vitaly Janelt (6.5/10) – Had the easy task of turning the ball home from close range to open the scoring but that was not his only impact on the game as he also finished five with tackles – the most of any player on the pitch.

Rico Henry (6/10) – Put in a solid shift for his side and could have easily come away with an assist but for some wasteful finishing from Bryan Mbeumo.

Bryan Mbeumo (6/10) – A mixed performance from the Cameroonian, who played a key part in both goals for his side but should have gotten on the scoresheet himself, while he was also needlessly booked for simulation.

Ivan Toney (6/10) – Typical predatory finish to double his team’s lead early in the second half and so nearly won it in the closing stages.

Saman Ghoddos (5/10) – Was brought on to give Brentford more attacking bite at the top end of the pitch but he did little to justify his manager’s faith.

Fraser Forster (5/10) – Had a number of shaky moments and would have done little in the mind of his manager to push for a starting spot going forward.

Clement Lenglet (7/10) – Delivered a pin-point cross for Kane to get Spurs back in the game. Defensively, he was also superb, completing five clearances, three tackles and winning all seven of his ground duels.

Eric Dier (5/10) – Gave away a cheap corner from which his side found themselves two goals down and never quite managed to get himself going.

Japhet Tanganga (5/10) – Featuring in his first league game of the season, the 23-year-old showed signs of rustiness and was deservingly hooked off in the 67th minute.

Ivan Perisic (6.5/10) – A constant menace for Spurs going forward with his excellent delivery into the box which caused Brentford all sorts of trouble.

Pierre-Emile Hojbjerg (8/10) *MOTM* – Drew Spurs level with a lovely finish from inside the box and kept his side ticking with his sharp passing.

Yves Bissouma (5.5/10) – Another quiet display from the midfielder, who is yet to find his feet in North London.

Matt Doherty (5/10) – Adventurous in attack as we have come to expect, but the wing-back evidently still has work to do in other facets of his game.

Heung-min Son (5.5/10) – Tested Raya with a couple of long-range efforts but was just about it from the Korean.

Harry Kane (7/10) – Moments after he was unlucky not to have won a penalty off Ben Mee, Kane got his side back into the game with a superb header and came within inches of grabbing a second late on.

Dejan Kulusevski (6.5/10) – Played a key role in Spurs’ leveller but his decision-making was questionable at times, perhaps down to his lack of match sharpness.

Davinson Sanchez (6/10) – Hardly put a foot wrong in his brief cameo and stung the palms of Raya with a strike from long range.