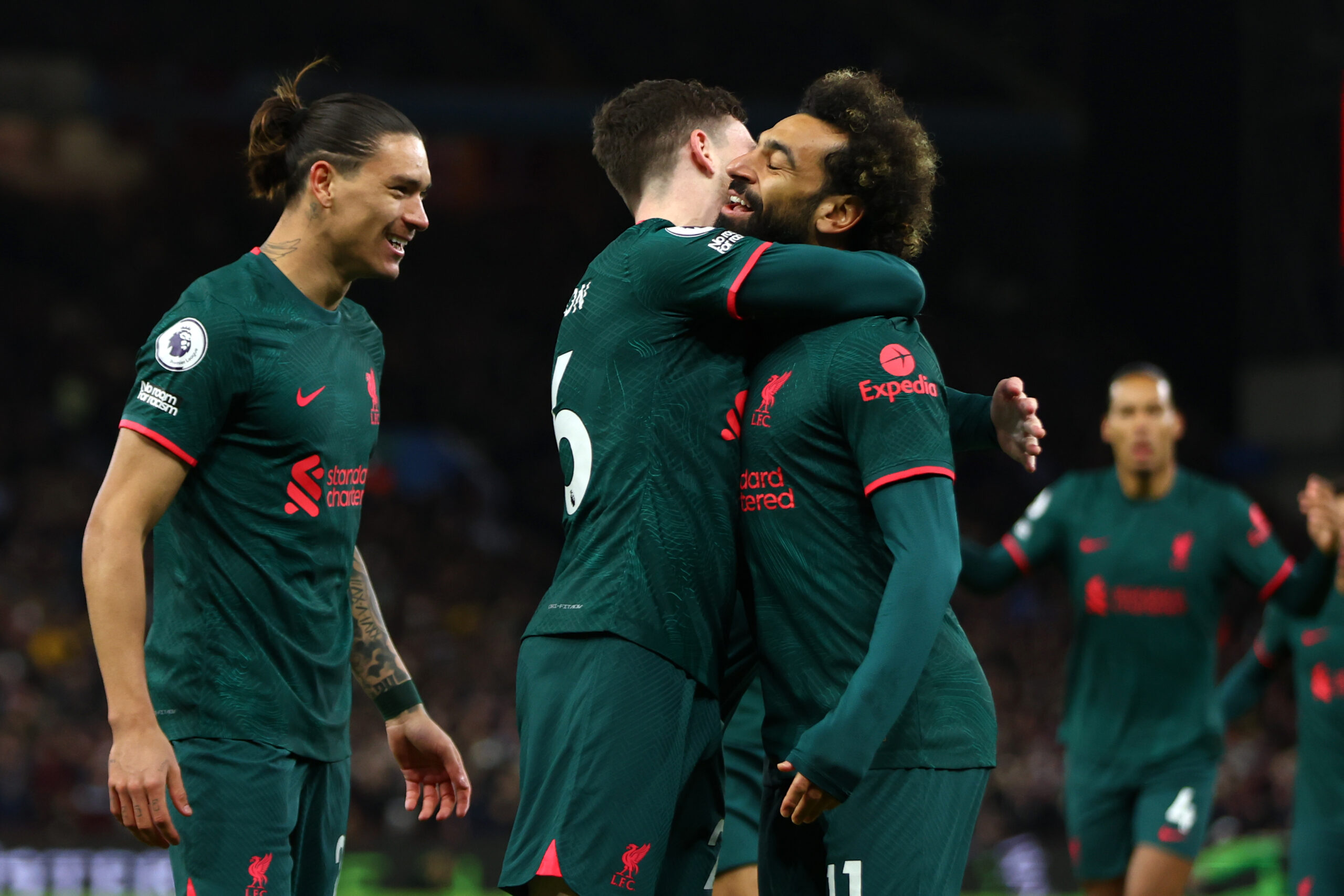 Liverpool’s bid to fight their way back into the Premier League top-four race gathered momentum as they overcame Aston Villa 3-1 on Boxing Day.

After dismantling Southampton 3-1 in their final league fixture ahead of the World Cup, Jurgen Klopp’s men posted another clear-cut win to reduce the gap on fourth-placed Tottenham Hotspur to four points.

Following a dismal five-game winless away start to the 2022/23 top-flight season (D2, L3), the Reds have now won their last two Premier League outings on the road.

Everything went smoothly for Liverpool at Villa Park as Mohamed Salah turned home Andy Robertson’s record-breaking 54th assist in the Premier League to break the deadlock in the fifth minute.

Klopp’s impressive run of four consecutive Boxing Day victories via an aggregate score of 14-0 heading into today’s trip to Birmingham was on the verge of extension when Joel Matip headed home in the 20th minute.

However, after consulting with the VAR room, referee Paul Tierney ruled the goal out for offside, which only postponed the inevitable as the visitors dominated the game through and through from the get-go.

Things might have gone a different way if Ollie Watkins had kept his calm, but his flying header from point-blank forced a routine save from Alisson.

Darwin Nunez had another one of those nights where he couldn’t score, missing a presentable chance to put the Reds two goals ahead.

Villa had a few decent chances to put things back to square one, yet after failing to convert any of them, Liverpool made them pay through non-other than Virgil van Dijk.

Of all the people in the Lions’ six-yard box, the Dutch defender was quickest to react on a loose ball, hammering home a half-volley through the forest of legs to fire his team 2-0 up at half-time.

Despite not making any substitution at the break, Unai Emery’s dressing-room talk impacted Villa’s game as they got the second half off to a furious start.

Watkins first slotted the ball past Alisson into the bottom corner in the first second-half attack, only to see his goal disallowed for a narrow offside position.

Captain John McGinn then failed to capitalise on a golden opportunity as he latched onto Lucas Digne’s cross on the far post. But despite being completely unmarked, he misjudged the ball.

Salah came close to punishing Villa’s wasted chances six minutes into the second half, breaking one-on-one with Robin Olsen, yet after carrying the ball from his own half, he couldn’t generate enough power for the shot.

Emery’s side continued to apply high pressure on their visitors and it finally paid off in the 59th minute, with Watkins heading home a sublime cross from Douglas Luiz to offer home fans hope.

But even though Liverpool barely threatened Olsen after the break, second-half substitute Stefan Bajcetic squeezed the ball through the legs of Tyrone Mings at the goal line to put the match to bed.

While the Reds bounced back from a 3-2 defeat to Manchester City in last week’s Carabao Cup action, Villa suffered their first Premier League loss under Emery.

Robin Olsen (7/10) – There was nothing he could do in any of the three goals he conceded today, but he came up huge to thwart a few dangerous shots from the opposition players.

Ashley Young (6/10) – Despite all the effort, the veteran’s age was a factor as he struggled to cope with Robertson’s pace down the flank.

Tyrone Mings (6/10) – Was caught napping once or twice by Nunez, spending most of the game on the back foot.

Ezri Consaa (7/10) – Far better than his abovementioned colleague, especially in the build-up play, where he played an essential role in helping Villa move the ball around from the back.

Lucas Digne (7/10) – Another impressive showing from the former Everton left-back as he was a constant threat on the left-hand side, producing numerous deadly crosses.

Emiliano Buendia (6/10) – Never managed to influence the game the way he would’ve wanted despite trying his best to stay involved in Villa’s attacking manoeuvres.

Douglas Luiz (7/10) – By far Villa’s best midfielder, the Brazilin essentially occupied every position on the pitch to give his team a foothold in the match.

Boubacar Kamara (6/10) – Tried to provide steeliness and technique at the base of midfield but was often short of ideas.

John McGinn (6/10) – Was guilty of some overhit passes, though he made up for his poor decision-making with tireless runs in the middle of the park.

Leon Bailey (6/10) – Not one of his best nights. Squandered several decent chances to help Villa cut Liverpool’s lead in half early in the second half.

Ollie Watkins (8/10) – His performance tonight makes us wonder how Gareth Southgate refused to include him in his England squad in Qatar.

Alisson (7/10) – While he could do nothing to deny Watkins from close range, he pulled off several crucial saves to keep Liverpool’s lead healthy.

Trent Alexander-Arnold (6/10) – Heavily involved in the opening goal but looked tired and uneventful in the aftermath.

Joel Matip (6/10) – Let Watkins slip his mark to bring Villa back into the game and overall looked out of steam.

Virgil van Dijk (8/10) – Had to do plenty of coverage to fill the holes left by Matip and excelled. The goal came as a bonus.

Andy Robertson (8/10) – It’s now clear that the Reds are a different side with Robertson in the starting line-up. Breathtaking display.

Jordan Henderson (7/10) – Did a fine job distributing the ball around the pitch with purpose and made some crucial interceptions.

Fabinho (7/10) – Though most of his passes went backwards, he still held up his end of the bargain, offering his defenders a massive helping hand.

Thiago Alcantara (6/10) – It’s hard to say how many loose passes he had tonight. Cannot complain about being subbed off.

Alex Oxlade-Chamberlain (6/10) – There’s no doubt he’ll return to the bench as soon as some of Klopp’s injured forwards regain full fitness.

Mohamed Salah (8/10) – Despite missing out on the Qatar World Cup, the Egyptian star hasn’t lost his touch, as evidenced by his early contribution.

Darwin Nunez (6/10) – Haters love to lean on the Uruguayan’s wayward finishing, but he continues to give them the material. Spurned at least three golden chances tonight.

Stefan Bajcetic (8/10) – A definition of a super-sub. Came in and scored with his first touch tonight.