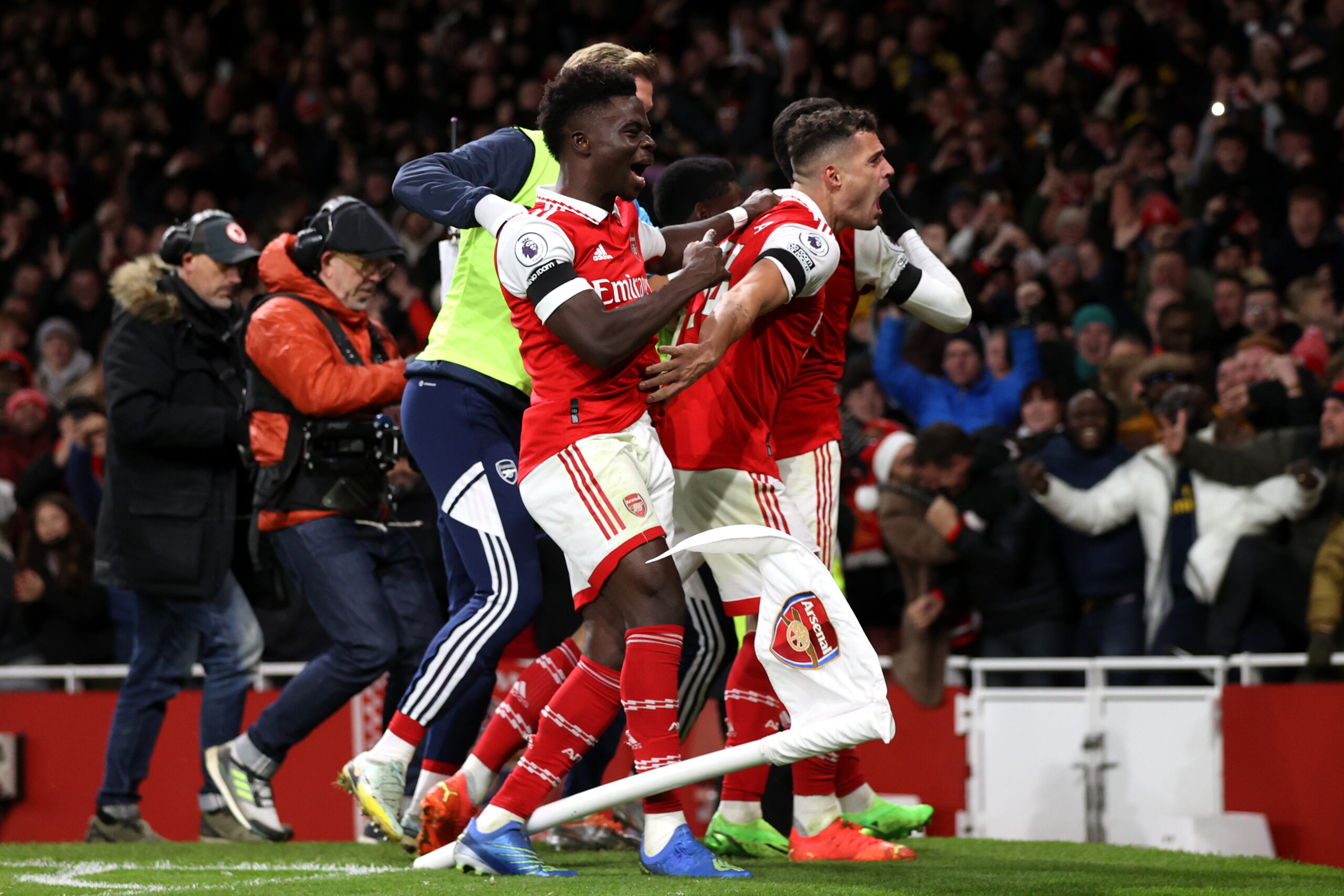 Arsenal came from behind to beat West Ham United 3-1 in an all-London Boxing Day encounter at the Emirates Stadium.

Mikel Arteta’s men assumed control of the ball from the get-go, hoping to break their opposition down early, as they’ve done so often at the Emirates this season.

But without star striker Gabriel Jesus, Arsenal found the task of penetrating a ‘double-decker’ David Moyes parked in front of Lucasz Fabianski’s goal quite daunting.

Arsenal thought they had an early lead in the bag when Bukayo Saka hammered the ball into the roof of the net with his weaker right foot, only to see it disallowed for offside in the build-up play.

Unfazed by that setback, the Gunners continued to dominate possession and keep West Ham pinned to their own third, but they lacked the quality to tear the Hammers’ stubborn backline apart.

Captain Martin Odegaard came close to opening the scoring in the 25th minute as he latched onto Saka’s glancing header but sent his close-range attempt well wide off the near post.

Instead of grabbing the lead, Arsenal found themselves on the back foot only moments later, with William Saliba’s late challenge on Jarrod Bowen penalised by referee Michael Oliver.

Said Benrahma, who barely had any contact with the ball beforehand, took the responsibility and slotted home from the spot to put West Ham in front on the cusp of the half-hour mark.

As he has often done this season, Moyes ordered a complete retreat aiming to ensure a slender half-time lead, with even Michail Antonio dropping back to help his team defend.

Despite keeping their visitors under siege for the remainder of the first half, Arsenal failed to create anything meaningful.

With almost the entire West Ham line-up on the edge of the box, the Gunners struggled to find a way to Fabianski’s goal, even though they spent most of the half around the Hammers’ penalty area.

Referee Oliver took the spotlight in the dying moments of the first half. Aaron Cresswell threw himself in the way of Martin Odegaard’s first-time effort from the edge of the box, with the referee pointing to the spot.

However, after consulting with the side-pitch monitor, Oliver changed his mind, waving play on as the ball hit the West Ham captain’s head.

Arsenal’s persistence and desire to turn things around gathered momentum only eight minutes into the second half as Saka latched onto a rebound to place the ball past helpless Fabianski and restore parity.

It took the Gunners only five minutes to turn the game on its head. After a relatively quiet first-half performance, Gabriel Martinelli stole the show in the 58th minute.

The Brazilian eased past Vladimir Coufal, cutting inside the box and beating Fabianski on the near post with a fine finish to take his Premier League tally to six goals this term.

Only 11 minutes later, Eddie Nketiah turned his marker around and slammed the ball into the bottom far corner to put the final nail in West Ham’s coffin.

In addition to taking their winning Premier League streak to four matches, the Gunners have potentially sealed Moyes’ fate in the Hammers’ dugout.

While Arsenal’s dream domestic season continues, West Ham’s hopes of avoiding relegation took another hit as they now languish only one point clear of the drop zone.

Aaron Ramsdale (7/10) – You can never blame a goalkeeper for conceding from the spot, but it was practically the only time he was truly called into action until Pablo Fornals forced his diving save late on.

Ben White (7/10) –  Effortlessly took Benrahma out of the game by doing very little and even found time and space to trouble West Ham’s defence with his darting runs down the right flank.

William Saliba (6/10) – Failed to get a telling touch to take the ball off of Bowen’s feet, sending Benrahma to the spot but shrugged off the stress to help Gabriel keep things smooth for the remainder of the game.

Gabriel Magalhaes (7/10) – Defended with his usual aggression but was rather overzealous in chasing down Michail Antonio, which never backfired on his team.

Kieran Tierney (7/10)- Slotted in from Oleksandr Zinchenko and excelled on the left-hand side, constantly venturing forward to provide attacking depth to Arsenal. Whipped in numerous inviting crosses.

Granit Xhaka (7/10) – The left-footed midfielder’s display tonight showed how right Arteta was to re-incorporate him into the Gunners’ starting XI.

Thomas Partey (8/10) – Arsenal’s best passer on the night. In addition to keeping his team’s midfield performing like clockwork, the Ghanaian made his presence known to every West Ham midfielder.

Gabriel Martinelli (7/10) – Terrorised the West Ham backline with his dazzling dribblings and movement, and was rewarded with another crucial goal.

Martin Odegaard (8/10) – Picked up clever positions between the lines and came knocking on the door multiple times without conversion. However, an inspiring showing from the captain.

Bukayo Saka (9 /10)- Looked bright from the start and West Ham had a hard time dealing with his mesmerising dribbles. Another superb showing from the youngster.

Eddie Nketiah (8/10) – It’s hard to fill the shoes of Jesus at Arsenal these days and the prodigious forward had to learn it the hard way. Quiet and uneventful early on but then scored a stunning goal.

Lucasz Fabianski (3/10) – Following a decent first-half showing, he must have forgotten his gloves in the dressing room. There’s no other explanation for his decline after the break.

Vladimir Coufal (3/10) – Keeping track of lightning-fast Martinelli is a formidable task, and the Czech Republic international wasn’t up to it tonight.

Craig Dawson (6/10) – Undoubtedly the best West Ham defender at the Emirates. Won every aerial duel and made countless vital interceptions inside the box.

Thilo Kehrer (4/10) – Pity he failed to meet his senior colleague’s standards. The German centre-back had another excruciating night, with his sloppy ball control disabling West Ham’s hopes of building from the back.

Aaron Cresswell (4/10) – Torn apart by Saka’s blistering pace time after time, the veteran left-back will want to forget this night ever happened.

Declan Rice (3/10) – For a guy whose market value reaches up to £150 million, he looked more like a ‘Sunday league’ player tonight. It’s impossible to remember him on the ball.

Tomas Soucek (2/10) – It’s hard to give him a better rating, considering his job was to help the Hammers retain possession and he miserably flopped at it.

Jarrod Bowen (6/10) – The left-footed winger was perhaps the only bright spot in an otherwise poor-performing West Ham side but had no support from his teammates.

Lucas Paqueta (2/10) – Another near-anonymous performance from the ex-Lyon playmaker as he struggled to hold onto the ball time and time again, letting down his manager.

Said Benrahma (6/10) – Other than the penalty, the Algerian made the commentators forget his name as the game progressed.

Michail Antonio (4/10) – How can you judge a striker who was forced to defend the entire game? Still managed to get involved in the build-up leading to the penalty.