This Week In Football: Manchester City and Liverpool go at it again, UWCL group stage draws to a close & more 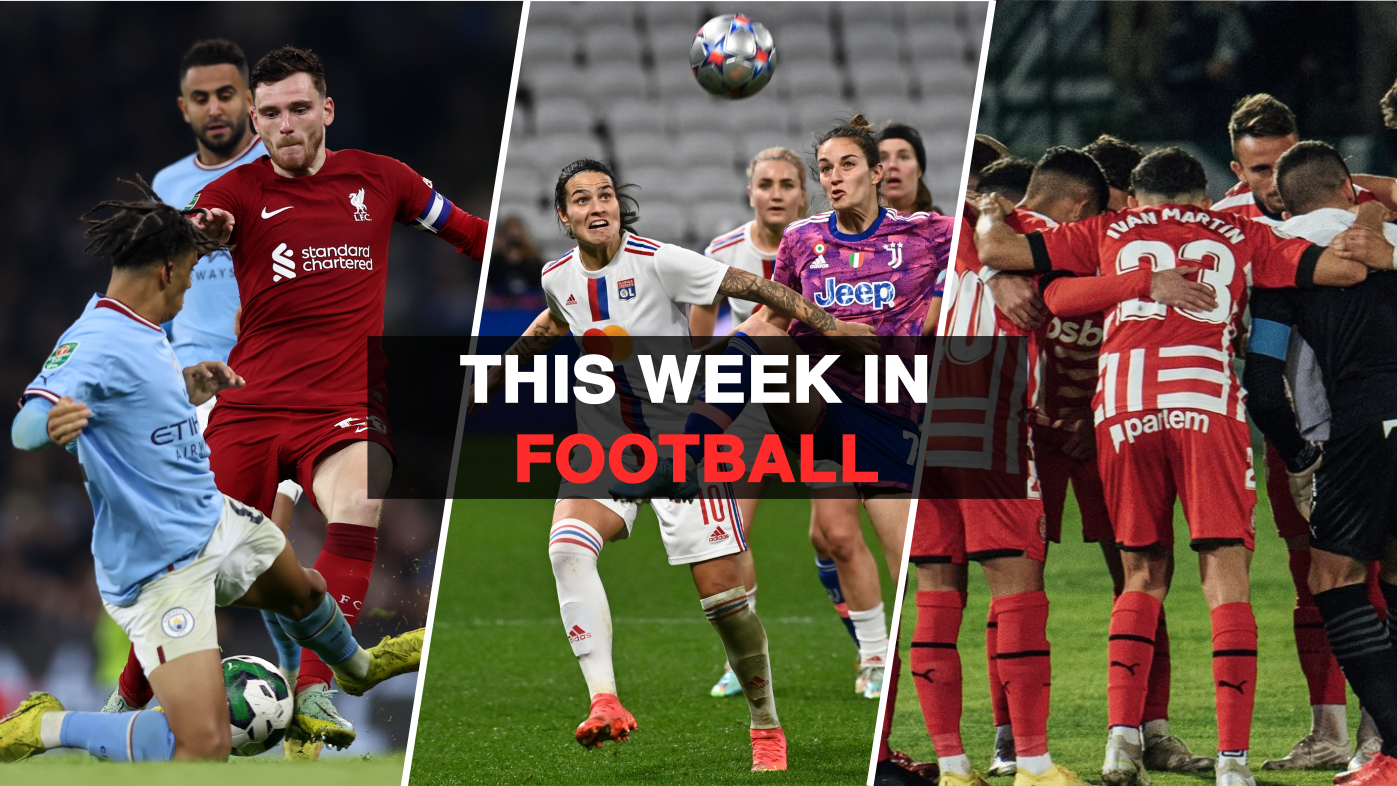 The Word Cup final was played less than a week ago, but we are already back at it in the world of club football. So, it is time to resume our weekly column that takes you through the best of the action.

On this week’s agenda, we have various cup fixtures from across Europe, as well as the UEFA Women’s Champions League.

The round of 16 of the Carabao Cup was played in England this week, with the headline clash pitting Manchester City against Liverpool.

Both sides unsurprisingly did not name full-strength XIs, but we were still treated to a cracking encounter. Erling Haaland marked his return to competitive action by turning in Kevin De Bruyne’s cross 10 minutes in, but Liverpool responded quickly through Fabio Carvalho.

Very early on in the second half, Riyad Mahrez scored a very well-taken goal to put Manchester City back in front, but just seconds later, Mohamed Salah equalised.

The decisive goal came in the 58th minute when Nathan Aké turned in Kevin De Bruyne’s cross. The match remained entertaining and even got a little feisty towards the end, but City held on to their win.

Among the standout performers was young Rico Lewis. The 18-year-old right-back was asked to play a very inverted full-back role, staying in midfield through all phases of possession including deep build-ups, as his touchmap shows.

He was mightily impressive, showing great spatial awareness and moving the ball around very securely with the nouse of an experienced number six (reminder: he’s supposed to be a right-back).

His manager Pep Guardiola was quite pleased too, calling him the man of the match after the game. Undoubtedly, Lewis has a very bright future ahead of him.

This week marked the end of the group stage of the 2022/23 UEFA Women’s Champions League as the final round of fixtures was played. Unfortunately, there was not much on the line as seven quarter-finalists had already been decided last week.

The only open spot was behind Arsenal in Group C, where defending champions Lyon and Juventus were facing off. The French side had the advantage so a draw would be enough for them, and their performance seemed to reflect that.

Fortunately for them, Juventus looked just as disjointed in the final third, so there were no goals nor any clear-cut chances in the match.

With a goalless draw, Lyon secured progression to the knockouts, while Juventus experienced their first-ever group stage exit from the UWCL.

The second round of the Copa del Rey caused many La Liga sides to return to action after the World Cup. All the teams in this round from Spain’s top-flight progressed apart from Girona, who suffered the biggest upset of the competition so far.

They made the trip to face fourth-tier Cacereño, naming a pretty strong line-up to get what would have been expected to be a routine win. They were in for a tough day, though, as the home side’s compact 4-4-2 block really restricted their attacking play.

Cacereño also posed a decent threat in transition, opening the scoring through David Grande 17 minutes in. Valentín Castellanos equalised for Girona at the half-hour mark, but they went behind again another thirty minutes later when substitute Iván Fernández found the back of the net.

It would be unfair to say that the hosts held on to the win thereafter because they looked the better side and could easily have added to their lead. In fact, they ended up outshooting Girona over the course of the 90 minutes.

The fifth round of fixtures in the Turkish Cup marked the return of top-level club football in the country, and there were a couple of shock results there too.

The biggest of those saw Süper Lig side Giresunspor eliminated at the hands of third-tier Karacabey Beldiyespor. That is a big enough upset on its own, but the margin of their defeat was the real shocker. It isn’t like Giresunspor are a relegation-threatened side either — they’re up in 12th in the table.

This was the biggest margin of defeat they have suffered this season and the first time they conceded more than three goals in a competitive fixture. You might think that this could be because they played their B team, but that was not the case either.

It is tough to explain this defeat, but Giresunspor must bounce back quickly as the league returns this weekend.

The quarter-finals of the Croky Cup was Belgium’s main attraction this midweek, with the biggest clash coming between Genk and Anderlecht.

This was a big game for the visitors, as it was the competitive debut of new manager Brian Riemer. He used an interesting hybrid system that looked like a 4-4-2 out of possession, but resembled an asymmetrical 4-3-3 when they had the ball.

That worked pretty well as Anderlecht went toe-to-toe with the runaway league leaders, keeping the scores level for the 90 minutes and taking the game to extra time. The only goal of the game was scored in the 95th minute, as Joseph Paintsil ran onto Bryan Heynen’s pass on the right and sent his finish past the keeper.

With that, Genk advanced to the quarter-finals, where they will face fellow title challengers Royal Antwerp.

There are more returning leagues over the weekend, so here are a few matches to watch:

🇧🇪 Belgium: Gent vs Standard Liège (Friday, 19:30 UTC)
The Belgian Pro League is back this weekend, starting with a few Friday night fixtures. Among those is a tasty match between Genk and Standard Liège who are fifth and seventh respectively, but both have aspirations to be in the top four.

🏴󠁧󠁢󠁳󠁣󠁴󠁿 Scotland: Celtic vs St. Johnstone (Saturday, 12:30 UTC)
The Scottish Premiership returned last weekend so Celtic have already played a couple of competitive fixtures after the World Cup break, which is why they should be in full swing against St Johnstone. Ange Postecoglu’s side have a nine-point lead at the top of the table already, and they will be keen to preserve that with a win.

🇹🇷 Türkiye: Gaziantep vs Beşiktaş (Sunday, 16:00 UTC)
Have you ever watched Dele Alli and Nathan Redmond play football on Christmas Day? Would you like to? Well, you might have the opportunity to do so when Beşiktaş visit Gaziantep on Sunday for their first league fixture after the World Cup.

🏴󠁧󠁢󠁥󠁮󠁧󠁿 England: Arsenal vs West Ham (Monday, 20:00 UTC)
The Premier League returns on Boxing Day with seven fixtures. The last is a London derby between league leaders Arsenal and West Ham, who are much lower in the table than they would like to be.