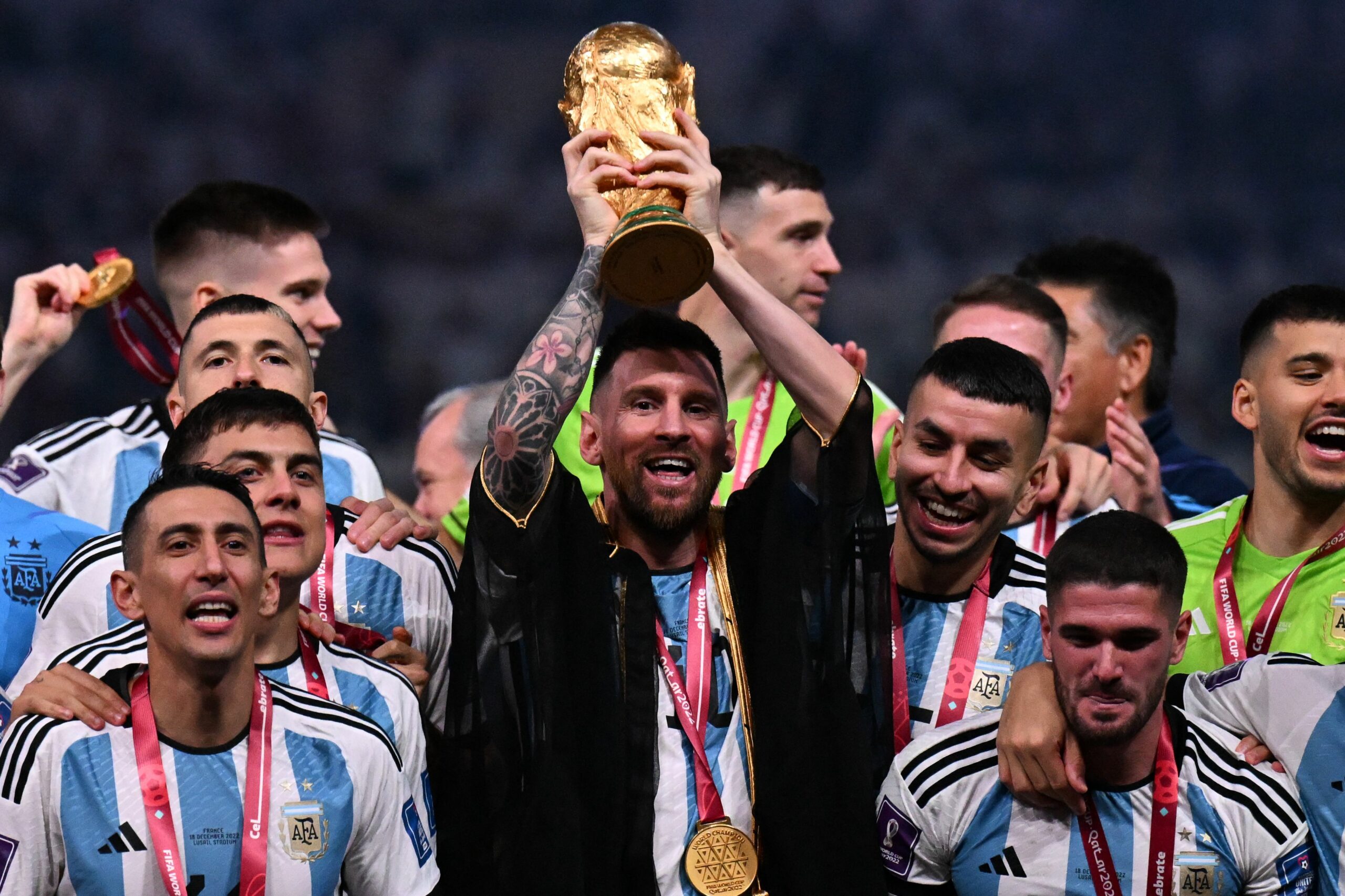 That is it, the World Cup is done. There were four weeks between the tournament opener at Al Bayt Stadium and the final at the Lusail Stadium, but they feel like four lifetimes.

We were treated to a real celebration of international football. We enjoyed 64 matches, many of which provided incredible drama and some fictional storylines.

If this was a movie, the scriptwriters would have won plenty of accolades. But this was not – this was football at its best.

Of course, that is referring to the on-pitch action. There are various off-pitch aspects to this World Cup as well that should not be ignored, but for this piece, we will be focusing on what happened on the grass inside the stadiums.

And we have lots to unpack. You’ll have noticed the headline of this piece that implies this was the most entertaining World Cup, which of course is open to subjectivity.

Most people would agree, though, that goals are entertaining, and on that metric, this was the best World Cup under the current format.

Besides goals, most football fans enjoy upsets, and those were aplenty at this World Cup too. That was especially the case in the group stage, where every team dropped points on at least one occasion.

That meant there were no perfect records after three games for the first time in the 32-team era of the World Cup.

In fact, the group stage was so entertaining that it even caused FIFA to rethink one of their decisions. The World Cup will be expanding to 48 teams from 2026 onwards, with the initial plan being to divide the teams into 16 groups of three.

But, here in Qatar, every single group had decisive fixtures kicking off simultaneously on matchday three, and that drama simply cannot be replicated in any other format.

The biggest upset of the group stage came after just a couple of days when Saudi Arabia defeated Argentina. They did so by scoring with two of their three shots on goal, while Argentina scored just once from a cumulative xG tally of 2.2 and also had three goals ruled out due to offside.

How did Argentina get along then? Things were not looking good after this result, but they did a decent job thereafter.

We’ll get to that final eventually, but a lot happened before that.

This included Australia’s Socceroos qualifying for the knockout stage for just the second time in their history before losing to Argentina, although they did put up a very good fight.

Elsewhere Japan winning Group E ahead of Spain and knocking Germany out was another huge shock, especially as they trailed La Roja in their last group match.

Their near-neighbours South Korea also progressed in almost equally dramatic fashion. It appeared the Group H decider was between Ghana and Uruguay, but Paulo Bento’s men staged an incredible comeback against group winners Portugal, netting the all-important winning goal in stoppage time to go from the bottom of the group to second place.

The bad news for them was that they faced Brazil in the round of 16, who sent them packing pretty quickly. At that time, the Seleção were looking like the most complete and therefore best side at the World Cup, but it all came crashing down quickly.

A staunch defensive performance from the ageless Croatia took their quarter-final to extra time, where it seemed the 2018 finalists would be heading home when Neymar scored a wonderful opener.

However, Zlatko Dalić’s side somehow fought back and equalised in the 117th minute, taking the game to penalties. They had recently experienced such a situation in the round of 16 against Japan and prevailed yet again.

Elsewhere, a big story was brewing in the Moroccan camp. Walid Regragui’s side topped their group ahead of Croatia and forced Belgium to search for early flight tickets, before frustrating and ultimately taking down Spain on penalties in their first-ever knockout victory.

They then created African history by becoming the first side from the continent to win a World Cup quarter-final, doing so by a one-goal margin against Portugal.

At the time, they had the best defensive record in the tournament. The Atlas Lions were the only side who had not conceded to an opposition player at the quarter-final stage, so their defensive organisation in the 4-1-4-1 block was one of the keys to their success.

Unfortunately, their run ended in the semi-final at the hands of France, who became the first defending champions to reach the final since 1998. On their way, they eliminated England in the last eight, extending the Three Lions’ wait for a major trophy.

In the other corner were Argentina, who survived a massive scare against the Netherlands before looking much more convincing against Croatia. That set the stage for perhaps the greatest World Cup final we will ever see, which was tough to describe using words, but we tried.

Retrospectively, this will certainly be remembered as Lionel Messi’s World Cup. The greatest player of our time capped off his incredible career by fulfilling his biggest dream, erasing his deepest wounds and lifting the sport’s ultimate prize in a fairytale ending.

In terms of performances on the pitch too, he saved his best for last. He ended the tournament with seven goals and three assists as well as the highest npxG+xA tally, but that can hardly sum up how good he was.

At the ripe old age of 35, he won the Golden Ball award, which is given to the tournament’s best player. He was indisputably that on almost all counts, including Twelve Football‘s model.

A word must be spared for Kylian Mbappé, who equally certainly was the second-best player at the tournament. He did win the Golden Boot award for most goals scored but will be bitterly disappointed to be the only player to score a hat-trick in the final and still end up losing.

Among the many other impressive performers were the young and the old, the rising and the reinvented. The defensive performances of Joško Gvardiol were mightily impressive, and alongside the tireless work of 37-year-old Luka Modrić, symbolised a time between two generations for Bronze medal winners Croatia.

For Argentina, Messi’s magic was shadowed by the quiet brilliance of Ángel Di María, his most important aide. The supporting cast also included youngsters Julián Álvarez and Enzo Fernández, who were once inspired by Messi in their childhood, and now inspired their team to eternal greatness. And, of course, we cannot forget Emiliano Martínez, whose penalty antics and heroics will go down in Argentine folklore.

Runners-up France were more than just Mbappé too. Antoine Griezmann shined in a much deeper role, impressing both with the ball at his feet and with his defensive work rate. Up top, Olivier Giroud entered the record books by overtaking Thierry Henry as France’s all-time top-scorer.

In the depths of midfield, young Aurélien Tchouaméni quietly went about his work, as he should be expected to do for years upon years in the future.

Morocco’s memorable run was built upon the hard work of their players. The quality of Hakim Ziyech was their star attacker alongside the overlapping Achraf Hakimi, but as aforementioned, their defence was exceptional.

Centre-backs Romain Saïss and Nayef Aguerd gave their all in Qatar, as did midfielders such as Sofyan Amrabat and Azzedine Ounahi. Many of them continued playing even through injury, although that ultimately contributed to their defeat against France.

There were many more exceptional players who stood out among the other teams, from breakout stars like Jude Bellingham, Jamal Musiala and Cody Gakpo, known greats like Neymar and Casemiro, and those that delivered special World Cup moments such as Enner Valencia, Cho Gue-sung and Vincent Aboubakar.

If you have gotten this far, congratulations, you just read about 1,300 words! Yet, we have had to leave so much out, which speaks volumes about what an incredible World Cup this has been.

We had the pleasure of enjoying a month of some of the world’s very best footballers competing for the most coveted prize, and for that, we should be grateful.