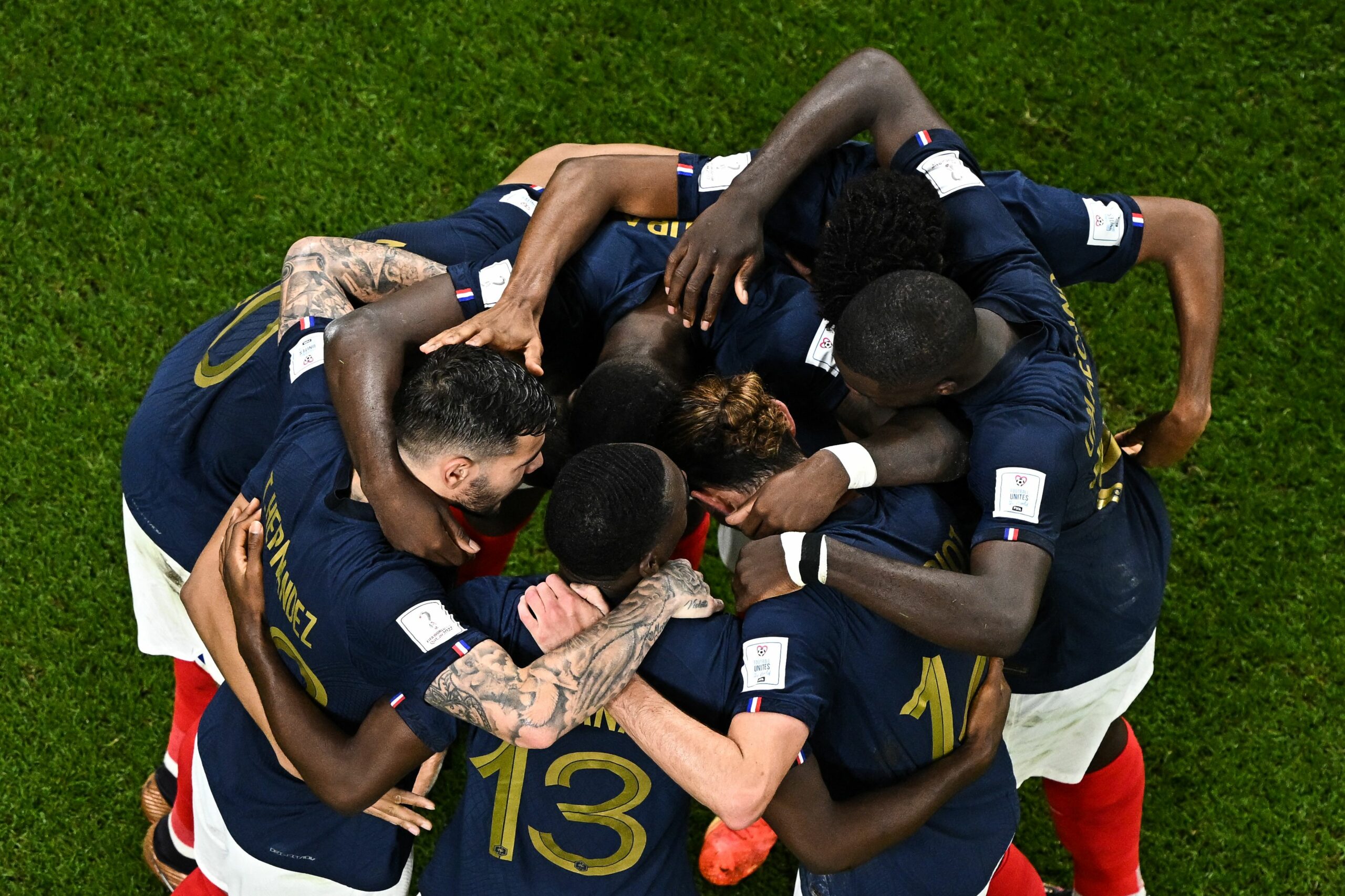 The second day of the 2022 FIFA World Cup knockout stage was not quite as exciting as the first, as the two favourites progressed with a fairly good deal of comfort.

France and England dispatched Poland and Senegal respectively, setting up a quarter-final date with one another.

France kicked off their knockout campaign in the early match and became the first defending Men’s World Cup champions to do so since 2006.

Their opponents, Poland, had reached this stage for the first time since 1986 but were not backed to advance any further here.

Czesław Michniewicz had not looked too good in the group stage and just about finished second on goal difference, so their defence was not expected to have a particularly good day against Kylian Mbappé and company.

However, they did quite a good job of containing France in their 4-5-1 low block, doubling up on the wings and player-marking in midfield to keep their opponents well away from their box.

Another improvement in the Polish performance was the fact that they started showing some willingness to use possession patiently and build out from the back rather than just hoofing balls upfield for Robert Lewandowski.

They managed to create a golden opportunity in the 38th minute, but Piotr Zieliński’s shot went straight at Hugo Lloris, and the rebound was cleared off the line by Raphaël Varane. They were made to regret that pretty quickly, as Olivier Giroud put France in front before half-time.

Poland were naturally forced to push harder in search of an equaliser as the second half wore on, so they sent on a second striker in Arkadiusz Milik in the 64th minute.

Of course, a more attacking approach left them more vulnerable to counter-attacks, which is something that the French forwards excel at. Within ten minutes, they doubled their lead.

Mbappe score his second of the night in stoppage time with an equally ridiculous finish, capping off a convincing win for France.

Poland did pull one back from the penalty spot through Robert Lewandowski just before the full-time whistle was blown, but that was a case of way too little and way too late.

In their third World Cup campaign, Senegal looked to progress to the quarter-finals for the second time in their history, but England were not so keen on that.

They were looking to do one better than their run to the semi-finals in Russia, and they were the favourites for this game at least.

Gareth Southgate used a 4-3-3 formation again, but Senegal were able to neutralise England in possession early on with a 4-4-2 defensive structure that relied heavily on player-marking in midfield and out wide, while one front player pressed the ball and the other followed Declan Rice.

They also created a couple of chances going forward through a very direct approach, but mostly kept the first half an hour uneventful.

Against such a player-oriented defensive set-up, some individual quality is often what is needed to breach the defence, and that is exactly what England used for their opener.

A clever flick from Phil Foden found Harry Kane (who was dropping into midfield again), and he then released Jude Bellingham. The Dortmund midfielder darted forward with the ball and squared it to Jordan Henderson, who turned it in first time.

Crucially, the Three Lions went on to grab a second just before half-time, through a counterattack on this occasion. Bellingham was involved again as he found Foden, who then chipped the ball into the path Kane. England’s captain went through on goal and finished with conviction to score his first goal of the tournament.

On the other side of the break, Senegal switched to a 4-1-4-1 formation, but England were comfortably able to control the match.

A third goal scored in the 58th minute by Bukayo Saka after Phil Foden found him in the box with pass through the legs of a defender effectively ended the match then and there itself, as England coasted to a win.

The next two round of 16 ties will be played tomorrow, so these are the matches you should be looking forward to:

Japan vs Croatia (18:00 AST):
After their shock win over Spain, Japan begin their knockout campaign by facing last time’s finalists Croatia. The Samurai Blue have never won a Round of 16 match in the World Cup and will certainly not be the favourites for this game, but their defensive solidity and counter-attacking threat could pose problems to Croatia, who have to be described as a slow-possession side.

Brazil vs South Korea (22:00 AST):
The only other side from the Asian continent that qualified for the knockouts are also in action tomorrow, and they have even tougher opposition. After fielding their ‘B’ team and losing to Cameroon, Brazil should be back to full strength for this game. They have progressed past the round of 16 in each of the last seven World Cups, so it will take something quite extraordinary for them to go out here.