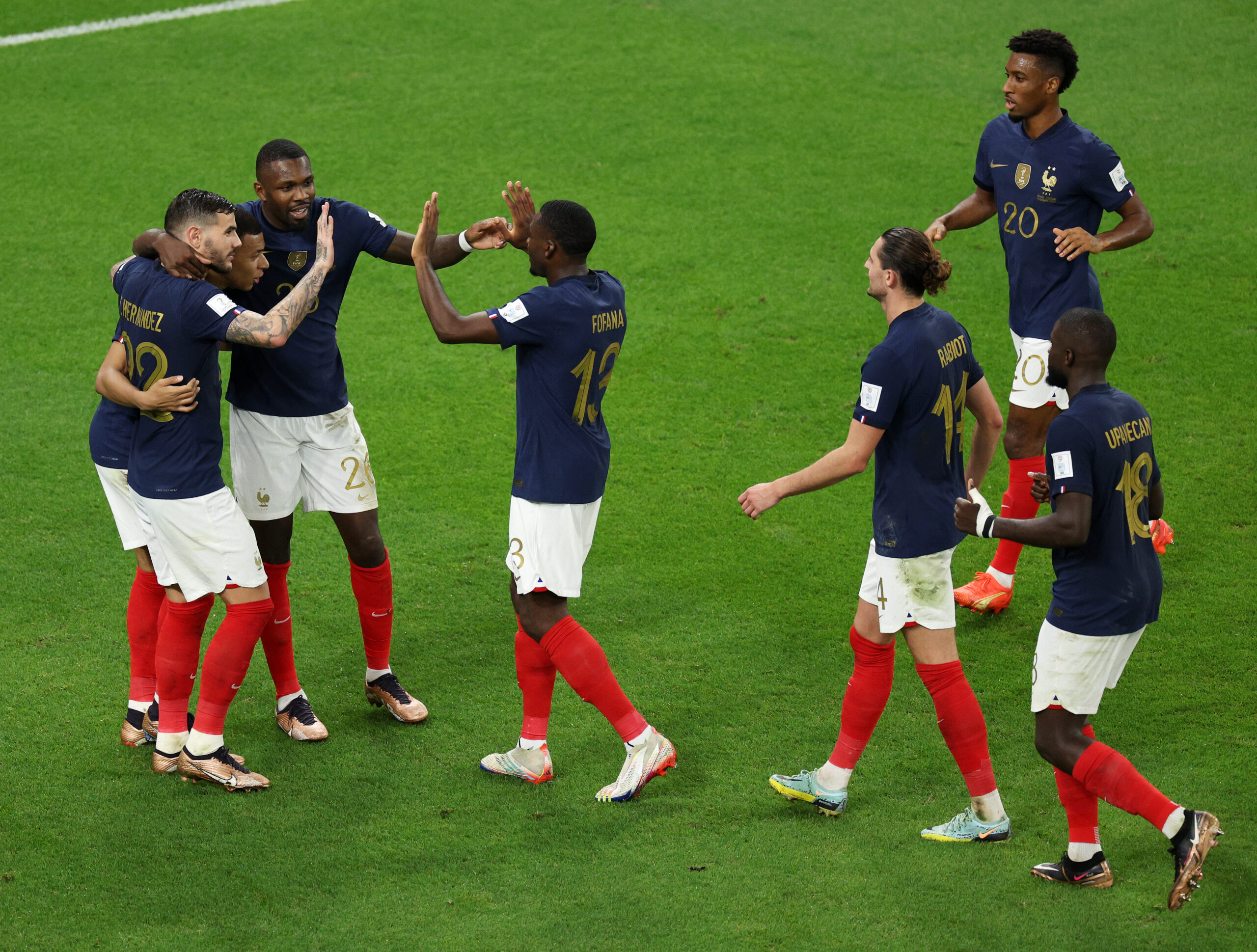 France comfortably progressed to the quarter-finals of the World Cup after defeating Poland 3-1 today.

As expected, Les Bleus dominated large parts of the first half. Their first sight at goal came early on, with Raphael Varane heading over from Antoine Griezmann’s corner. Moments later, Aurelien Tchouameni saw his long-range effort saved by Wojciech Szczesny.

France continued to push for the opener and missed a glorious chance in the 29th minute. Griezmann fed Ousmane Dembele, who slid a low cross for Olivier Giroud. However, with the goal gaping, he somehow missed the target.

It wasn’t long before Kylian Mbappe started to have an impact on the game. He twisted past Matty Cash and worked space for a shot, but his powerful attempt was turned wide for a corner.

Having weathered that storm, Poland fashioned a huge chance of their own. Bartosz Bereszynski picked out Piotr Zielinski with a cutback, but the 28-year-old could only fire straight at Hugo Lloris when well placed. From the rebound, Jakub Kaminski saw his shot cleared off the line by Raphael Varane.

And they were made to pay for their missed opportunity, as France took the lead just before half-time. Mbappe slipped a through ball to Giroud, who finished into the far corner. This was his 52nd goal, overtaking Thierry Henry as his country’s all-time top goalscorer.

Didier Deschamps’ men came out in the second half in search of another goal. Mbappe had a shot deflect narrowly wide, and Giroud flicked Jules Kounde’s cross into the side netting.

That second goal did come eventually, and it was a beauty. Dembele found Mbappe with a pass, and he slammed into the roof of the net at the near post for his fourth goal of the tournament.

And number five came in injury time. Substitute Marcus Thuram played the ball into Mbappe, who unleashed a stunning strike into the far corner. This took him two clear in the race for the Golden Boot.

In the dying seconds, Poland were given the chance to net a consolation when VAR punished Dayot Upamecano for a handball.

Robert Lewandowski’s spot-kick was saved by Lloris, but the referee ordered a retake after the goalkeeper stepped off his line. The Barcelona forward made no mistake on the second attempt.

This proved to be the last kick of the game. France will play either England or Senegal in the quarter-finals.

Jules Kounde (7/10) – Let little past him and contributed going forward.

Raphael Varane (8/10) – Kept Lewandowski quiet. Made a huge goalline block in the first half.

Dayot Upamecano (6/10) – Solid for the most part. Carelessly conceded a late penalty.

Aurelien Tchouameni (7/10) – Helped France maintain control in the middle of the park. Had one shot from distance well saved.

Adrien Rabiot (7/10) – Had a strong game in midfield. Contributed at both ends of the pitch.

Ousmane Dembele (7/10) – A constant threat. Got an assist and should have had another. Sometimes his final ball let him down.

Antoine Griezmann (8/10) – Classy on the ball and linked everything together for France. A fine display.

Wojciech Szczesny (5/10) – Positioning was called into question for France’s second goal. Made a couple of saves in the first half.

Matty Cash (5/10) – Won some battles early on against Mbappe, but found things progressively harder as the game went on. Couldn’t handle him by the end.

Kamil Glik (6/10) – Made a couple of necessary tackles and blocks. Sometimes found it difficult to cope with the French attack.

Jakub Kiwior (5/10) – Had a difficult time up against Giroud. Couldn’t do much to stop France’s frontline.

Bartosz Bereszynski (6/10) – Unlucky not to get an assist in the first half. Had an interesting battle with Dembele.

Jakub Kaminski (6/10) – Had a couple of chances in the first half. Unlucky not to score when his shot was cleared off the line.

Sebastian Symanski (5/10) – Had a tough task up against France’s midfield, and was unable to gain any control over the ball. Substituted in the second half.

Piotr Zielinski (6/10) – Poland’s most threatening player, although he missed a glorious chance at 0-0.

Przemyslaw Frankowski (5/10) – Made an error that almost led to a France goal. Struggled to make an impact.

Robert Lewandowski (5/10) – Was often isolated up front, and found himself unable to do much against Varane. Eventually converted his penalty after missing the first attempt.