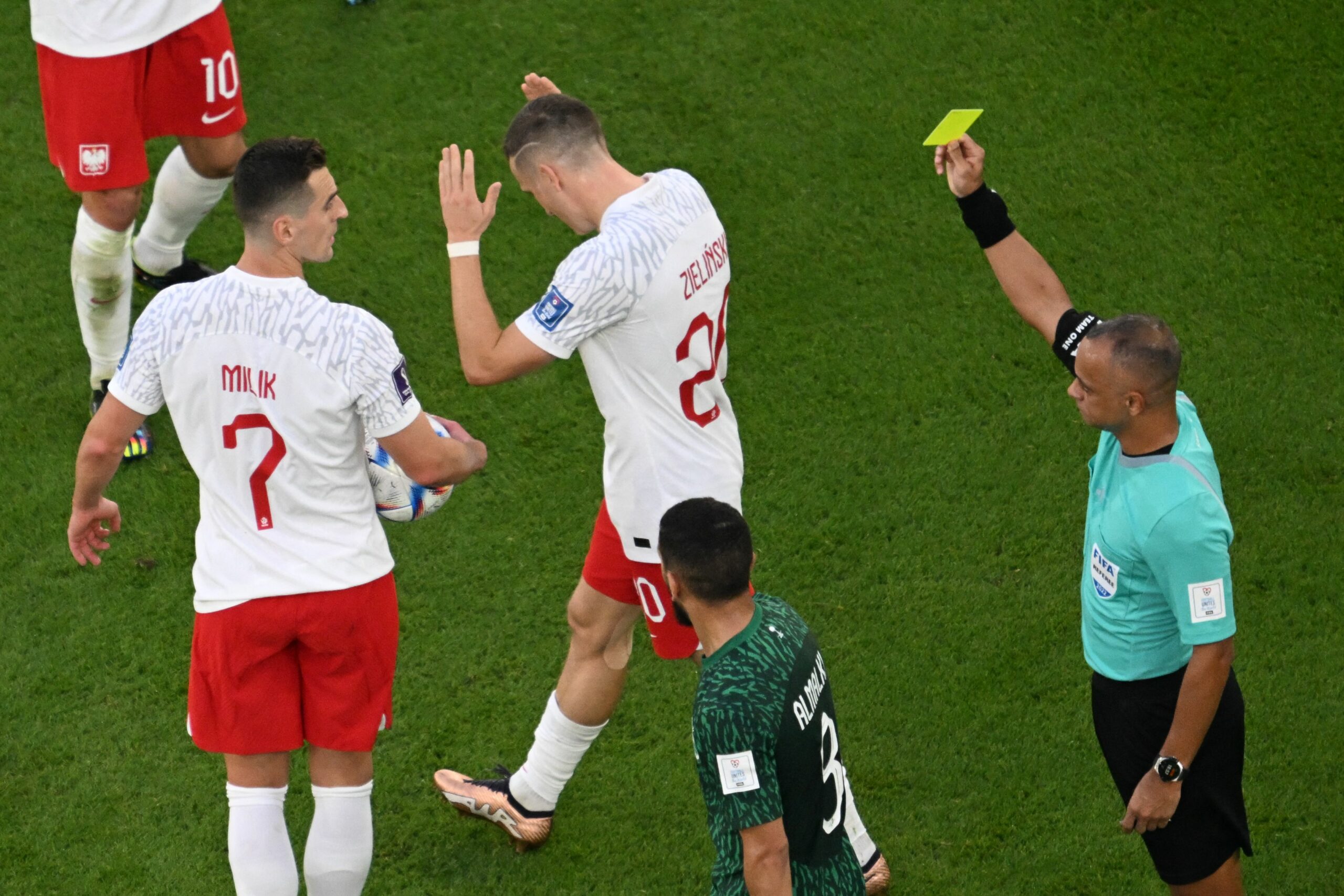 The drama meter was dialled up to the maximum on day 11 of the 2022 FIFA World Cup, as Groups D and C went out with a bang. Here’s the recap of all the frantic action for you:

In Group D, the important fixture was Australia vs Denmark, as just one of the two sides would be able to progress to the knockout stage.

A draw suited Australia, so it was unsurprising to see them adopt a less attacking approach. However, their usage of a very passive 4-4-2 block out of possession that did not involve any consistent pressing but also used a relatively high defensive line was very puzzling. In short, they were anything but compact defensively.

Denmark switched to a 4-3-3 formation, which was a good decision in a match where they dominated the ball. It was quite easy for them to play through Australia’s disjointed defensive shape so they broke into the final third with a good deal of regularity, but their final balls were frustratingly poor.

That would come back to bite them, as Australia took the lead at the hour-mark after Mathew Leckie finished off a break in style.

The Socceroos proceeded to dig deep and defend for over half an hour because the result in the other match meant that a draw here would see both sides eliminated. They managed to hold on to their lead, sealing what can be described as an economical victory.

Denmark, who were supposed to be dark horses, managed to pick up only one point and have been eliminated from the group stage for the second time in their six campaigns.

By contrast, Australia have advanced past the group stage for just the second time in their FIFA Men’s World Cup history, and just look what it means to them back home:

Tunisia knew they would need a favourable result in the other match to be in with a chance of progressing, but they needed a win to be in contention.

Generally, that would be a tough ask against the defending champions, but they were facing a heavily rotated French side since Didier Deschamps’ men had already booked a berth in the knockout phase.

How heavily rotated are we talking? Eduardo Camavinga started at left-back – that should say it all. Tunisia were able to take the game to this second-string French line-up, putting the ball in the back of the net just eight minutes in, although that goal was ruled out for offside.

The goal came eventually, as Wahbi Khazri opened the scoring in the 58th minute by poking the ball past Steve Mandanda.

As things stood at the time, Tunisia were on course to finish second, but just as their celebrations ended, Australia took the lead against Denmark to snatch the place right back.

After that, Tunisia could do little but hold on to their lead and hope that the Danes scored, which is what they did until full-time at the Al Janoub Stadium.

There was yet more drama to come, as substitute Antoine Griezmann equalised for France in the eighth minute of stoppage time. A VAR check ensued, which resulted in an offside call that allowed Tunisia to keep their first win of the tournament at least.

The Eagles of Carthage came agonisingly close to qualifying for the last 16 of a World Cup for the first time in their history, but it was not to be for them. Despite losing, France held onto top spot in the group on goal difference.

Argentina faced Poland in a Group C decider with their World Cup campaign on the line. A loss would see them eliminated for certain and a draw would require a favourable result in the other match, so a win was what they were after.

Poland were leading the group before this fixture, so a point would be enough for them to advance to the knockout phase in the FIFA Men’s World Cup for the first time since 1986.

Unsurprisingly, they came into the match with a very defensive approach. Robert Lewandowski was completely isolated up top as the rest of the side dropped into their own third in a deep 4-4-1-1 block.

The inclusion of Enzo Fernández made Argentina’s midfield look much better than it did against Poland, so they were able to progress the ball with a good deal of regularity. They encountered a road block in the final third, as Poland’s defence proved largely unreachable.

So, a very contentious penalty awarded by VAR in the 38th minute seemed to be an absolute gift, but Wojciech Szczęsny snatched it right back by brilliantly saving Lionel Messi’s penalty.

Less than a minute into the second half, though, Alexis Mac Allister scored his first-ever international goal to give Argentina a crucial lead. They were able to control the match to a much greater degree thereafter, and Julián Álvarez’s goal in the 67th minute all but sealed the deal for them.

That meant Argentina advanced as group winners, crucially so too because that meant they avoid France in the round of 16. There was a lot on the line for Poland, though, as we will explain below.

Saudi Arabia and Mexico were both in with a chance of progressing to the knockout stage, but realistically needed to win for that.

Mexico were not promised anything even in the event of such a result, but of course, that did not stop them from going for it. They dominated proceedings in the first half, keeping over two-thirds of possession and outshooting their opponents 11-4.

All they lacked was a goal, which came seconds into the second half thanks to Henry Martín. Luis Chávez added a second about five minutes later, but Mexico’s goal difference remained inferior until Álvarez’s second goal for Argentina.

After that, Poland and Mexico were level on points, goal difference, goals scored and had drawn against each other, so the tiebreaker boiled down to fair play. Poland’s four yellow cards compared to Mexico’s seven before tonight gave them the upper hand, forcing El Tri to chase a third goal or hope for some Polish bookings.

The third goal did come in stoppage time after Poalnd’s match had ended, but it was Saudi Arabia who scored through Salem Al-Dawsari. That confirmed Mexico’s first group stage exit in a FIFA Men’s World Cup since 1978, while Poland are left to face defending champions France in the round of 16.

Groups E and F are next as their deciders will be played tomorrow, so here is what could happen in those games:

Canada vs Morocco (18:00 AST):
After beating Belgium and picking up a point against Croatia, Morocco are in a great position in Group F. They need just one point against already-eliminated Canada to be sure of a spot in the round of 16, but the Maple Leafs will not be giving anything away easily as they search for their first-ever Men’s World Cup win.

Croatia vs Belgium (18:00 AST):
On the last matchday of the groups, we have seen some pre-knockout eliminators, and arguably the biggest one of those in terms of the stature of the teams is Croatia versus Belgium. There still is a very tiny chance that both go through with a draw, but such a result would only guarantee Croatia’s progression, so Belgium must look for a victory.

Costa Rica vs Germany (22:00 AST):
Group E was blown wide open by Costa Rica’s win over Japan, which gives them a decent chance of advancing. The favourites still are Germany, but Hansi Flick’s side need nothing short of a win, and potentially by a big margin too.

Japan vs Spain (22:00 AST):
Spain are the only Group E team who will feel relatively comfortable at the moment, but they do need at least a point against Japan to be sure of advancing to the knockouts. Such a result would also suit Japan if the other match is tied, but since the kick-offs will be simultaneous, they cannot take any chances and must play for a win.