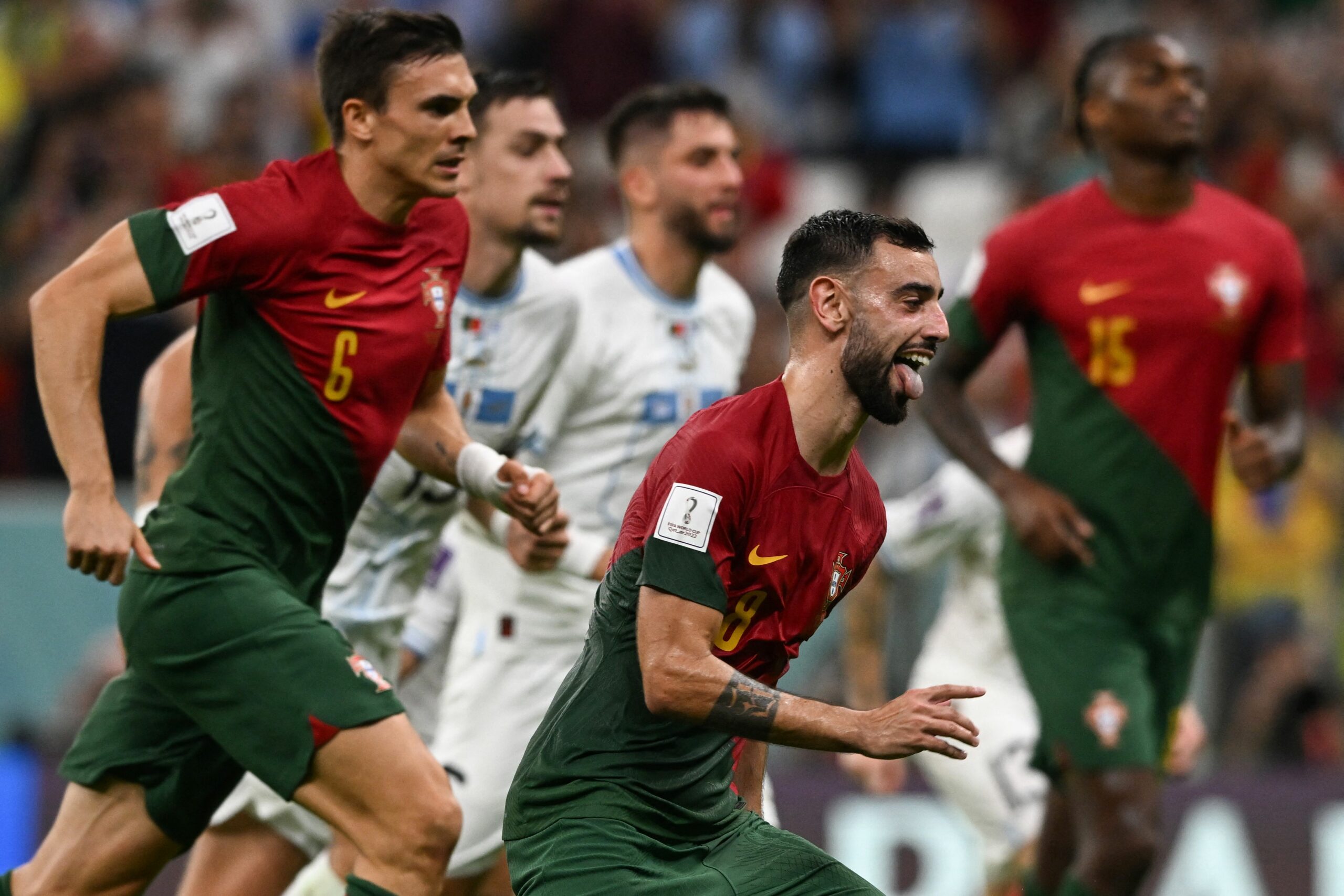 Portugal went head-to-head with Uruguay at the World Cup today bidding to boost their chances of progressing to the last 16.

They created the game’s first chance, with Cristiano Ronaldo winning an aerial duel, but Bruno Fernandes fired the knockdown wide.

Uruguay failed to control the game and lacked any rhythm in their play. Joao Felix cut inside and fired at goal, but club teammate Jose Gimenez produced a superb block to send it over.

Rodrigo Bentancur took matters into his hands, dribbling past four players into the Portugal box but firing at Porto goalkeeper Diogo Costa.

The Tottenham Hotspur midfielder went on another slaloming run before poking at goal, but Darwin Nunez directed the tame effort wide.

Portugal found Ronaldo in the box again, but Rochet got out quickly to smother his effort. Three minutes before the break, left-back Nuno Mendes went down and had to receive treatment.

The Paris Saint-Germain defender left the pitch in tears as Raphael Guerreiro replaced him. At half-time, the game was goalless, and the xG stood at 0.23 for Portugal and 0.62 for Uruguay.

Portugal came out and added some urgency to their game after the break. Felix received a pass from Fernades in the box and went on the outside before firing into the side of the net.

Minutes later, Portugal got their opening goal. Fernandes floated a cross into the box, and Ronaldo appeared to get a faint touch to guide it home. However, the goal was awarded to Fernandes.

Cavani skewed a shot wide in the 58th minute after receiving a decent cross from the right. Substitute Giorgian de Arrascaeta was acquainting himself with the game and swung in a dangerous free-kick that found its way to substitute Luis Suarez. However, the former Barcelona striker fired wide.

Arrascaeta then got a through ball from Varela, but Costa was quick off his line to close him down.

Portugal put the game to bed in the 90th minute when they received a soft penalty call. Fernandes slid in a pass which Gimenez went down to block.

The ball touched his arm accidentally, but the referee pointed to the spot. Fernandes dispatched it.

Fernandes had two chances to complete his hat-trick. Rochet saved his first effort while the second smacked off the woodwork.

Diogo Costa (8/10) – He made some good saves to deny the Uruguayans and cover his shame after the mistake in the previous game.

Ruben Dias (6.5/10) – He was uncompromising and not flashy in his dealings. The Manchester City man defended his box with minimum fuss.

Pepe (7/10) – The veteran was solid and composed. He led his defensive line to a deserved clean sheet.

William Carvalho (7/10) – The Real Betis man is a calm and composed operator. He screened the defence well and kept things ticking.

Ruben Neves (6/10) – The Wolverhampton Wanderers man sprayed some nice passes as usual but did not add enough steel in midfield.

Joao Felix (6.5/10) – The Atletico Madrid attacker was brighter today than in the last game and justified his coach’s faith.

Bruno Fernandes (9/10) – The 28-year-old midfielder scored two goals and slid some exquisite passes between the lines. He also got into dangerous attacking positions.

Cristiano Ronaldo (6/10) – The 37-year-old was solid without being spectacular. He made good runs for his team.

Sergio Rochet (5.5/10) – His distribution was poor, but there was nothing he could do about the goals.

Sebastian Coates (6/10) – The Sporting CP man was solid and did a decent defensive job.

Diego Godin (5/10) – The veteran struggled to impose himself on the game. He was passive, as Gimenez did most of the defensive covering.

Jose Gimenez (6.5/10) – The Atletico Madrid man was solid in his challenges but gave away a penalty that dampened his performance.

Guillermo Varela (7/10) – He drove his team forward from midfield and created chances for his side. It was a solid performance.

Federico Valverde (6/10) – The Real Madrid midfielder did not impose himself on the game as much as he’d have liked. It was still a solid outing.

Rodrigo Bentancur (7.5/10) – Bentancur took the game to the opponents with his twinkle toes and drive. He tried hard to make things happen for his side.

Mattias Vecino (6/10) – The former Empoli man struggled to impose himself in midfield. He failed to control the game and didn’t add any attacking thrust.

Mathias Olivera (7/10) – The Napoli left-back always looked to join the attack and help his side advance. It was a good second consecutive performance at the tournament.

Edinson Cavani (6.5/10) – The former Paris Saint-Germain striker won aerial duels for his side when they went long and tried hard to link up play.

Darwin Nunez (6/10) – He tried hard to do positive things for his side, but it was not happening for him.