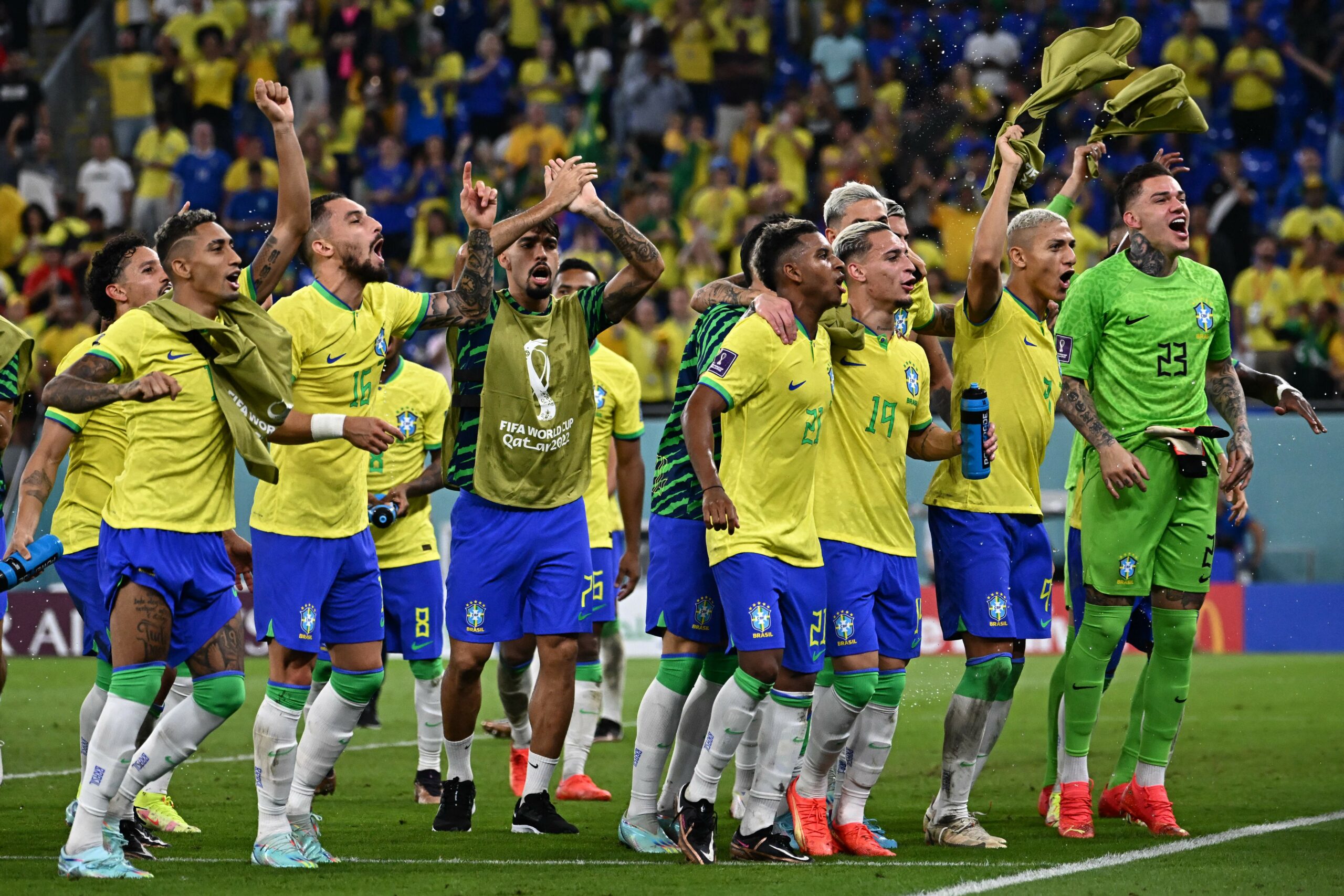 Day 9 at the 2022 FIFA World Cup marked the last time we would have four consecutive fixtures in the tournament, and this format went out with a bang as we were treated to almost 12 hours of entertainment and interesting discussion.

Cameroon and Serbia set the tone for the day in the early kick-off, and they were matched by South Korea and Ghana. Things slowed down a little towards the end of the day, but we have lots to talk about from all of the games.

Cameroon’s game against Switzerland last week was not the most gripping in terms of entertainment, but one thing that stood out to us was André Onana’s advanced positioning in the second half as his side searched for an equaliser.

His ‘modern’ style of goalkeeping did not go down well with his manager, as the pair ended up having a falling out which saw the Inter Milan keeper suspended from the squad.

Devis Epassy started in goal as a result, and he had relatively little to do in the first half other than booting the ball as far away from his goal as possible.

He then watched on as his side took the lead just before the half-hour mark after Jean-Charles Castelletto turned in a set-piece, which opened Cameroon’s account at this World Cup.

Just as Rigobert Song would have been planning his half-time team talk in stoppage time, he saw his side undo all of their good work and concede twice in the space of a couple of minutes, as Strahinja Pavlović and Sergej Milinković-Savić turned the game around for Serbia.

Aleksandar Mitrović doubled his side’s lead early in the second half, and it started to look like they would cruise to a comfortable victory.

But then Vincent Aboubakar came off the bench, and he completely changed the came. The 30-year-old forward breached the dismal Serbian offside trap twice in the space of three minutes, scoring himself first a lovely lob before setting up Eric Maxim Choupo-Moting for the equaliser.

We have previously discussed how the early 1.00 pm local time kick-offs have largely been drab affairs, but the last one of them has almost made up for the shortcomings of the ones before it with one of the most thrilling matches of the World Cup.

Its result keeps both teams alive in the competition, but they will need at least a win on the final day of the group stage to progress to the round of 16.

The drama and entertainment continued as South Korea faced Ghana, which almost matched Cameroon vs Serbia in terms of goals.

In this game, it was Ghana who assumed control initially. Goals from Mohammed Salisu and Mohammed Kudus meant that they took a two-goal lead into half-time, so the situation was looking good for them at the time.

Things changed about 15 minutes into the second half, though, as Gue-Sung Cho scored two headers in quick succession after getting on the end of pinpoint crosses from Kang-In Lee and Jin-Su Kim.

Ghana quickly restored their advantage as Kudus completed his brace in the 68th minute, prompting Korea to resume their search for an equaliser. They were forced out wide by a centrally compact defence, so crossing was the way to go for them.

Ghana’s defenders stood firm, and most notable among them was Salisu, who made seven headed clearances. As the above event map shows, even when South Korea won the aerial duels, they generally did so away from goal and not in dangerous areas (except for their two goals), so Ghana should be pleased with how they held out under pressure.

This win sets up a crunch fixture for Ghana against Uruguay in what effectively will be a head-to-head battle for a spot in the knockout stage.

We all know what happened the last time these two nations faced off in a World Cup with elimination at stake.

The second Group G game did not match the first in terms of excitement and goal-scoring chances, but the game was interesting in other ways.

All eyes were on Brazil to see how they would cope in the absence of Neymar (as well as Danilo), and the answer was by using pretty much the same system but obviously with different players.

Lucas Paquetá was Neymar’s replacement as he operated in an advanced role in the left half-space, while Fred played beside Casemiro but got forward fairly regularly.

Éder Militão started at right-back, but instead of inverting into midfield like Danilo, he occasionally stayed deeper and formed a back-three in possession as an auxiliary full-back.

Brazil kept a greater share of possession so they spent a good deal of time trying to break down Switzerland’s 4-2-3-1 block, but did not find a great deal of success.

The only big chance they created from open play in the first half was Vinícius Júnior’s rather tame effort at the end of a Raphinha cross which was saved by Sommer.

The Real Madrid winger was celebrating in the 64th minute after slotting the ball past the keeper, but Brazil were made to wait further by an offside in the build-up.

Ultimately, a great strike from Casemiro in the 83rd minute ended up separating the two sides, as Brazil came away with a win at the end of a businesslike showing.

That sends Brazil through to the round of 16 with top spot very much theirs to lose on the final day of the group stage.

Switzerland remain second and most likely to join them, for which they will need to avoid defeat against Serbia on Friday.

It was a good day for all the Portuguese speakers at the World Cup, as Portugal joined Brazil in confirming their spot in the knockouts with a win over Uruguay.

This was arguably the least watchable game of the day, as there was little in terms of goalmouth action or promising attacking situations.

Uruguay switched to a 5-3-2 defensive shape that aimed to keep Portugal out of the central areas, which they did quite successfully.

Portugal did attempt eight shots in the first half, but the fact that they were worth just 0.22 xG altogether tells you all about the quality of those chances.

With less possession, Uruguay struggled to create anything substantial in way of attack themselves, save for an individual effort by Rodrigo Bentancur.

Fittingly for such a match, the opening goal was rather flukey. Bruno Fernandes’ cross missed the head of Cristiano Ronaldo but went in at the far post anyway, and although the ex-Real Madrid forward appeared to claim the goal in his celebration, it was given to his teammate.

The Manchester United midfielder scored a second in stoppage time to seal the win, but he only did so through a controversially-awarded penalty.

Thankfully that goal did not affect the outcome of the match as Portugal would have won and gone through to the knockout phase with the solitary goal too, but it does make Uruguay’s goal difference worse than South Korea’s.

This means that if both sides win their last group games by the same margin, it will be the Koreans who go through in second place. Either way, Group H is sure to have a grandstand finish.

There are no second chances now as the final round of the group stage fixtures kicks off tomorrow.

Ecuador vs Senegal (18:00 AST):
The Group A decider tomorrow sees Ecuador and Senegal face off in what effectively is a knockout tie before the round of 16. It is advantage Ecuador because a draw suits them, and their performances in the first two games have also been better than Senegal.

Netherlands vs Qatar (18:00 AST):
The other Group A match kicks off at the same time. Qatar are already out but will be looking for their first World Cup win or at least first points. However, the Netherlands will not give anything up easily because they need three points to be sure of finishing at the top of the group.

Iran vs US (22:00 AST):
Iran and the United States’ match was already attracting a lot of attention before the tournament kicked off, but the stakes have got a lot higher since. Much like Ecuador vs Senegal, this is a direct face-off for a knockout spot, with the US needing a win to succeed.

Wales vs England (22:00 AST):
Group B’s second kick-off is an all-British affair between Wales and England. The Three Lions will aim to win their group, but Wales still have an outside chance of making the knockout stage.