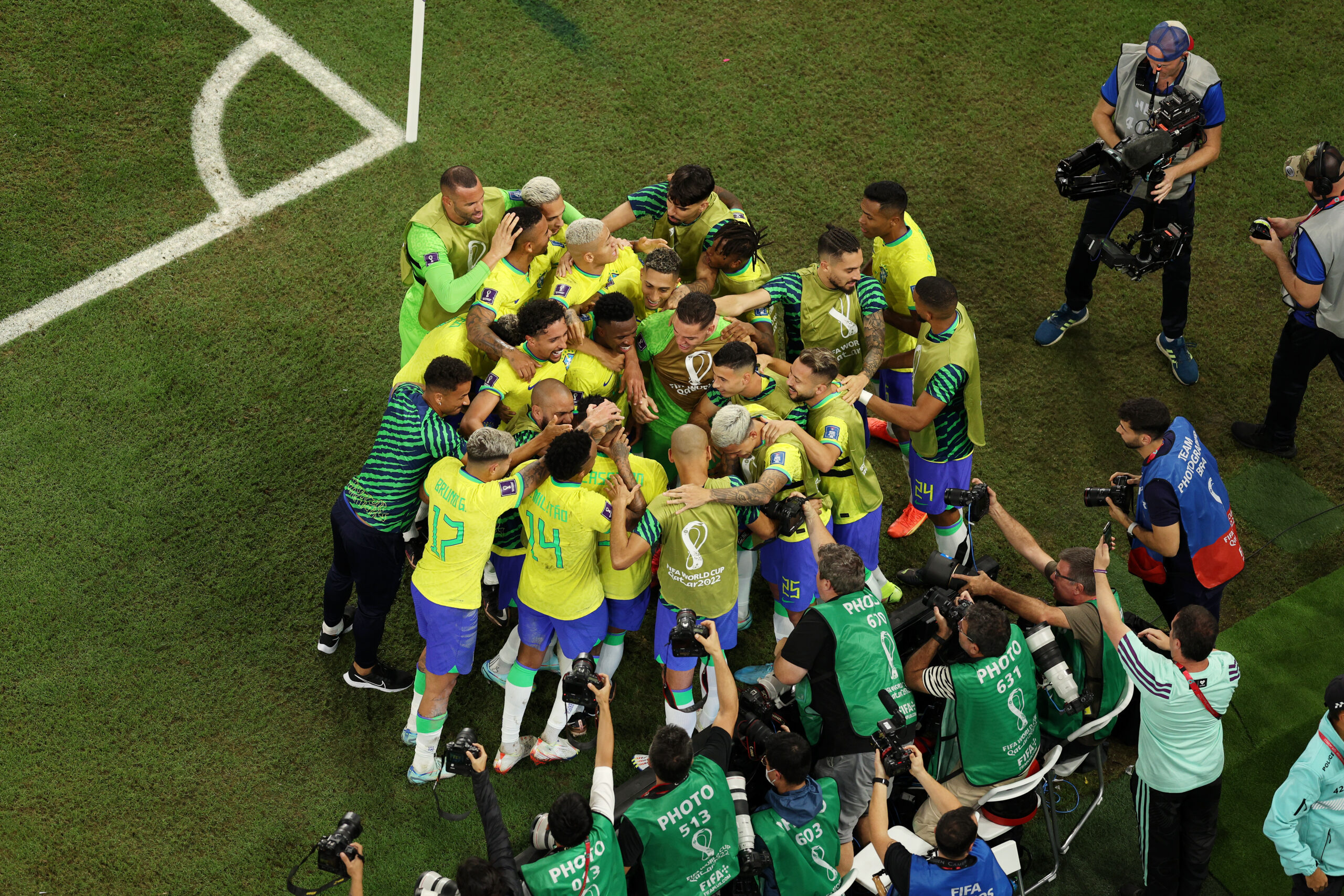 Brazil confirmed their place in the knockout phase of the 2022 FIFA World Cup courtesy of a narrow 1-0 victory over Switzerland at the Ras Abu Aboud earlier today.

Tite’s men opened their World Cup journey with a 2-0 win over Serbia and knew that all three points in their second match would see them progress into the next round.

However, the five-time world Champions were unable to make a fast start to the game as Switzerland coped with the Brazil attackers to a large degree,

Vinicius Junior had the best chance to break the deadlock in the opening half, but the Real Madrid man was denied by Yann Sommer.

Brazil began the second half with real intent without necessarily troubling the opposing defence to a large degree.

The Selecao thought they had taken the lead midway through the second period, but Vinicius’ opener was chalked off because of Richarlison’s involvement in the goal from an offside position.

As the game progressed, a share of the spoils looked more likely until Casemiro latched on to Rodrygo’s pass inside the box to finish with aplomb.

Having gone behind, the Swiss pressed forward in search of an equaliser but it was Brazil who came closest to getting on the scoresheet once again as Vinicius was denied from point-blank range.

Alisson (6/10) – Faced no shot on target for the second game running but was proactive when needed.

Alex Sandro (7.5/10) – Completed a game-high seven tackles and repelled everything that was thrown his way.

Thiago Silva (7/10) – Yet another impressive display from the veteran, who was near-perfect on the day.

Marquinhos (7/10) – Kept Breel Embolo at bay throughout the course of the 90 minutes and was excellent with the ball at his feet.

Eder Militao (6.5/10) – Came into the side for the injured Danilo and put in a solid shift despite not playing his preferred role.

Fred (5.5/10) – Struggled with his passing at times and got himself walking a tightrope with a needless yellow card before he was eventually replaced.

Casemiro (8/10) *MOTM* – Dominated in the centre of the park for Brazil before adding the cherry on top with a lovely game-winner.

Lucas Paqueta (6/10) – Constantly looked to make things happen for his side in the opening half but he wasn’t able to deliver the goods.

Raphinha (7/10) – A bright spark down the right flank where he constantly terrorised the Swiss and was unlucky not to have come away with an assist.

Richarlison (5/10) – Starved of decent service once again although he did fumble some promising situations.

Vinicius Junior (5.5/10) – Kept the opposing defence on their toes throughout the contest but missed a glorious chance to open the scoring while his decision-making was suspect on several occasions.

Rodrygo (6.5/10) – Came off the bench to set up the winning goal after which he should have put the game to bed but for some excellent defending.

Bruno Guimaraes (6/10) – Solid display from the Newcastle United man in his first outing at this level.

Yann Sommer (6.5/10) – Dealt with pretty much everything that came his way excluding the goal where he was left helpless.

Ricardo Rodriguez (5.5/10) – Was left exposed on several occasions, but he held his own quite well.

Nico Elvedi (6/10) – Completed a game-high seven clearances and was superb in possession of the ball.

Manuel Akanji (6.5/10) – A tad unlucky to end up on the losing side off the back of a fine display, particularly in one-on-one situations against Vinicius.

Granit Xhaka (6/10) – Was at his usual combative self in the centre of the pitch and held his own pretty much.

Remo Freuler (6/10) – Put in a solid shift alongside Xhaka in midfield but couldn’t lay a foothold on the contest.

Ruben Vargas (5.5/10) – Threatened on several occasions but was dealt with pretty comfortably.

Djibril Sow (5/10) – A largely pedestrian display from the midfielder, who is yet to have any real impact for his side in Qatar.

Fabian Rieder (5/10) – Came into the XI for Xherdan Shaqiri but did little to justify his manager’s selection.

Breel Embolo (5/10) – Often left isolated up front and there was little he could do to influence the game.

Edimilson Fernandes (5.5/10) – Was brought on to help his side regain some level of control in midfield but ultimately failed to do that.

Renato Steffen (5/10) – Like Rieder who he came off the bench for, Steffen also put up a subpar performance as he failed to conjure up any substantial attacking threat.