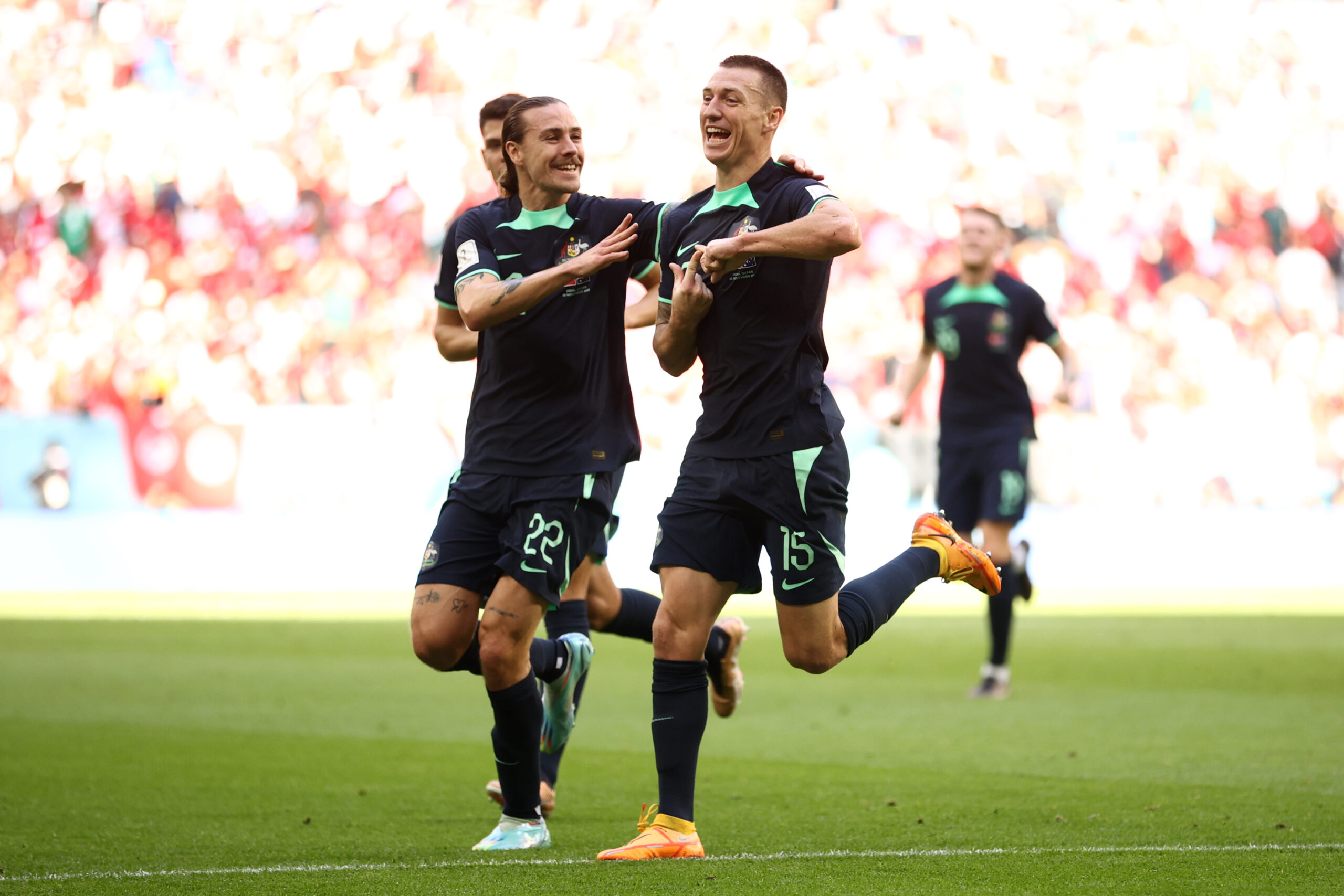 Australia gave their chances of progression a huge boost with a 1-0 victory over Tunisia today.

The first half didn’t bring about many chances of note, but the first one resulted in the opening goal for the Socceroos.

Craig Goodwin’s cross deflected into the path of Mitchell Duke, who brilliantly directed his header into the far corner.

The Eagles of Carthage pushed for an equaliser before half time, and had two promising opportunities to find the net.

Mohamed Drager had a shot excellently blocked by Harry Souttar, and Youssef Msakni fired wide after being found by Issam Jebali’s low cross.

As the minutes ticked by, Tunisia cranked up the pressure. Mat Ryan was twice called upon to deny Msakni, and was later on hand to keep out Montassar Talbi’s long-range volley.

In the closing stages, second half substitute Wahbi Khazri had a huge chance to level the scores when he was picked out by Naim Sliti’s low cross. However, he could only divert the ball straight at Ryan.

The win leaves Australia second in the group as things stand. They will book their place in the round of 16 should they defeat Denmark on Wednesday. As for Tunisia, they need a win against France to stand any chance of reaching the knockout stage.

Aymen Dahmen (5/10) – Hardly called into action. Couldn’t be blamed for the goal.

Mohamed Drager (6/10) – Showed some threat and could have scored. Substituted at half time as Tunisia changed systems.

Yassine Meriah (6/10) – Managed to cope with Australia’s frontline. Decent on the ball.

Montassar Talbi (6/10) – Defended well enough, and helped get his side up the pitch with some good passes and driving runs forward.

Aissa Laidouni (5/10) – Battled hard, but struggled to get a grip on the game. Booked early on for a frustrated challenge.

Naim Sliti (5/10) – Set up Khazri for a big chance late up, but didn’t influence the game overall.

Youssef Msakni (6/10) – Looked like the most likely to get a goal for Tunisia. Missed a big chance before half time.

Mat Ryan (7/10) – Made a couple of saves in the second half. Reliable when called upon.

Harry Souttar (8/10) *MOTM* – Rock-solid at the back. Got in the way of everything and won every battle.

Kye Rowles (7/10) – Defended well for the most part. Had one shaky moment in the second half which went unpunished.

Aziz Behich (6/10) – Sometimes found it difficult at the back, but coped well enough when under pressure.

Aaron Mooy (8/10) – The beating heart of Australia’s team. Covered every blade of grass and hardly lost the ball.

Riley McGree (6/10) – Battled hard and showed glimpses of quality on the ball. Substituted after 60 minutes.

Matthew Leckie (5/10) – Unable to trouble the Tunisian backline that much.

Mitchell Duke (7/10) – Produced a brilliant header for the opener. Substituted on the hour mark.