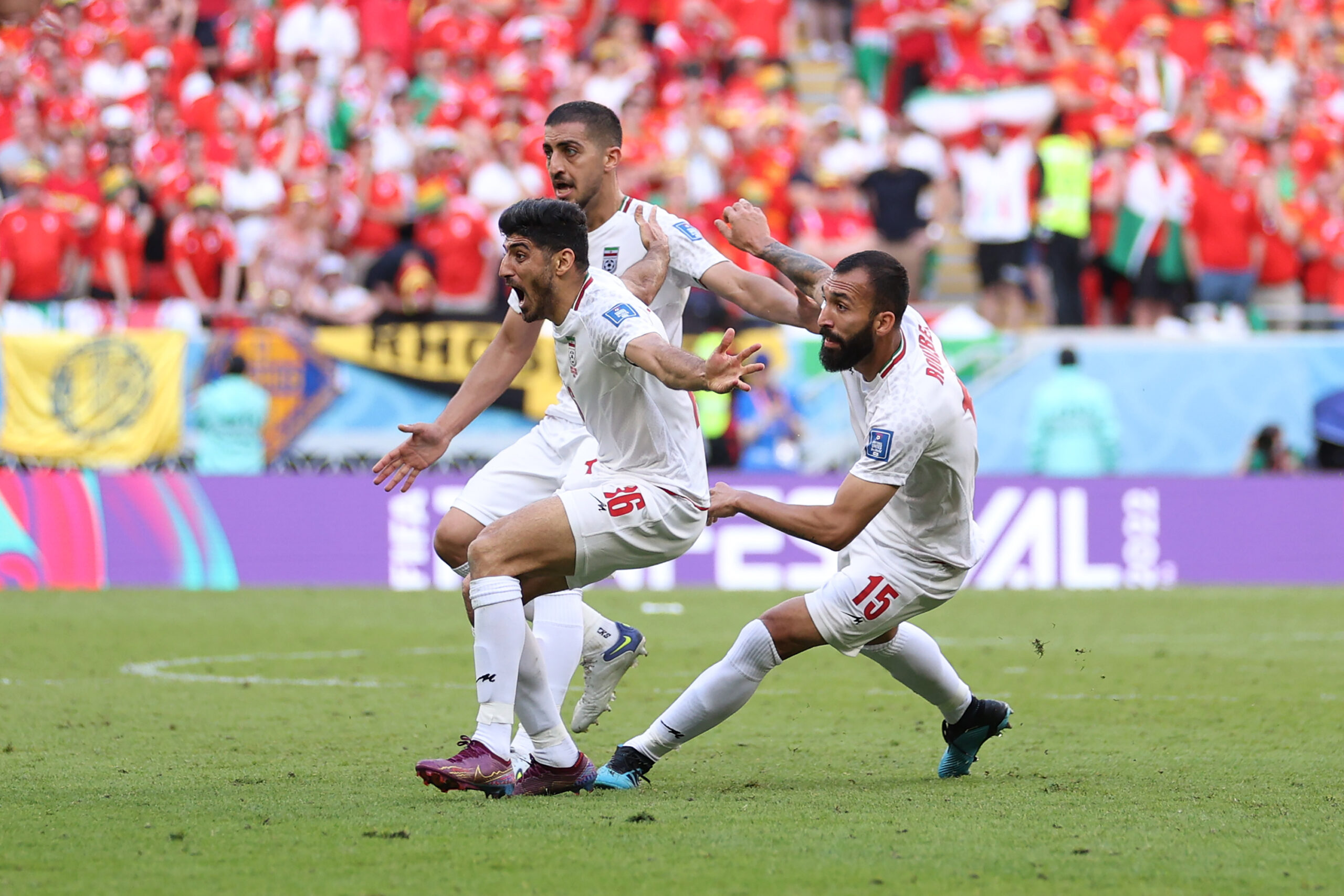 Iran scored two goals in injury time against Wales to give themselves a huge boost in their bid to reach the round of 16 at the World Cup today.

It was a quiet first half, although both sides had early chances to take the lead. Connor Roberts found Kieffer Moore with a cross, but he could only divert it straight at Hossein Hosseini.

Iran thought they had taken the lead down the other end when Ali Gholizadeh finished from Sardar Azmoun’s square ball. However, replays showed that the midfielder was offside, and VAR ruled the goal out.

Carlos Queiroz’s men came out after the break fired up and somehow didn’t take the lead in the 51st minute. First, Azmoun was played through on goal by Saeid Ezatolahi but could only strike against the post.

The ball fell to Gholizadeh, and he bent a curling effort onto the other post. From the rebound, Azmoun could only head straight at Wayne Hennessey.

Hennessey was needed once again in the 72nd minute. Ezatolahi hit a low drive towards the far corner, but the Nottingham Forest man was at full-stretch to turn it wide.

The Dragons struggled to create anything of note in the second half but almost took the lead late on. The ball fell kindly to Ben Davies on the edge of the box, but Hosseini turned his powerful shot over the crossbar.

Things got harder for Wales with five minutes remaining, as they were reduced to ten men. Mehdi Taremi nicked the ball ahead of the onrushing Hennessey, who then brought the striker down.

Initially, the referee only gave a yellow card, but this was later upgraded to a red after a VAR check.

Iran continued to push for a winner and eventually got what they deserved in the closing minutes. Joe Allen’s clearance came to Roozbeh Cheshmi, who unleashed an excellent strike into the far corner from range.

And they put the finishing touches on a fine performance right at the death. Taremi led the counter-attack and found Ramin Rezaeian, who lifted the ball over substitute goalkeeper Danny Ward and into the back of the net.

It was a crucial win for Iran, who currently sit in second place in Group B. As for Wales, they go into their final group stage game against England needing a win to keep their hopes of qualification alive.

Wayne Hennessey (5/10) – Made a couple of key saves in the second half before getting sent off.

Connor Roberts (6/10) – Played one good cross for Moore early on that could have resulted in a goal. Carelessly lost the ball in the build-up to Gholizadeh’s disallowed goal.

Chris Mepham (5/10) – Came under relentless pressure, which he struggled to deal with. Given a tough time by the Iranian frontline.

Joe Rodon (6/10) – Made a couple of crucial tackles to keep Iran at bay in the first half. Had a difficult battle after the break.

Ben Davies (6/10) – Defended fairly well. Had one of Wales’ only chances with a long-range effort in the second half.

Ethan Ampadu (5/10) – Unable to impose himself on the game and got overran in the second half.

Kieffer Moore (5/10) – Wales’ only attacking outlet. Battled hard and won plenty in the air, but also wasted one good chance early on.

Gareth Bale (3/10) – Completely anonymous. Difficult to remember him even touching the ball.

Hossein Hosseini (7/10) – Made one key save early on. Rarely called into action otherwise.

Ramin Rezaeian (8/10) *MOTM* – Offered plenty at both ends. Capped off a wonderful performance with a fine goal.

Morteza Pouraliganji (7/10) – Faced a tough battle up against Wales’ forwards and came out on top. Didn’t allow much past him.

Milad Mohammadi (7/10) – Nullified the threat of the Wales frontline. Let very little past him.

Ali Gholizadeh (7/10) – Involved in most of Iran’s attacking play. Had one ruled out and unlucky not to score with a cracking effort in the second half.

Ahmad Noorallahi (7/10) – Helped dominate the game in the second half. Provided some attacking threat.

Saeid Ezatolahi (7/10) – Took control of the game in the second half. Played one excellent through ball to Azmoun that should have been finished.

Ehsan Hajisafi (6/10) – Won most of his battles and worked hard. Didn’t contribute enough in the final third.

Sardar Azmoun (7/10) – Linked up well and caused all sorts of problems for the Welsh backline. However, also squandered a couple of glorious chances.

Mehdi Taremi (8/10) – Bullied Wales’ defenders physically and was instrumental in most of Iran’s attacking play. Capped the afternoon off with a late assist for Rezaeian.