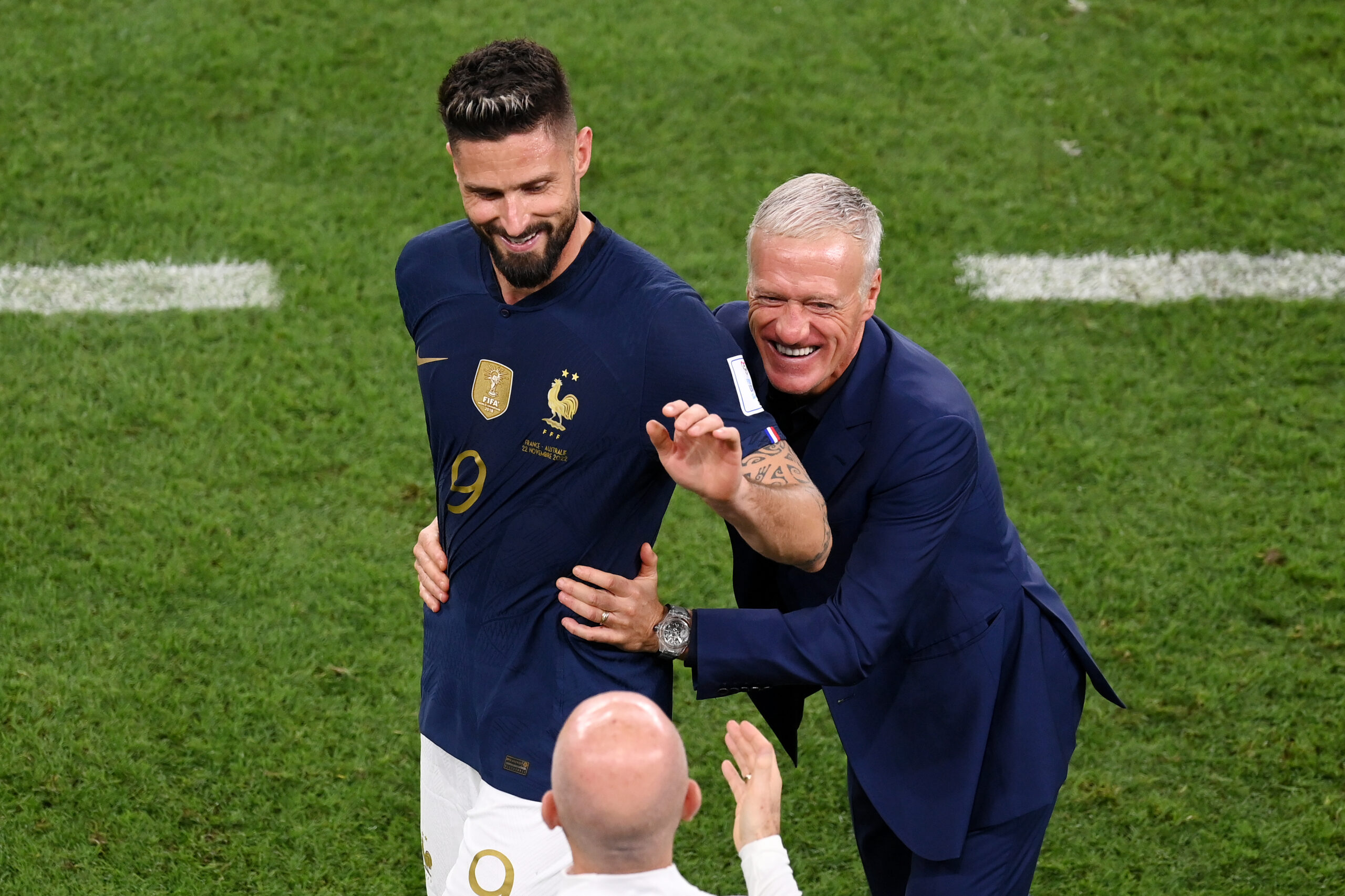 France and Denmark are set to trade tackles in a mouth-watering 2022 World Cup encounter at Stadium 974 on Saturday.

Despite falling behind only nine minutes into their Group D curtain-raiser against Australia, the reigning world champions thumped the Socceroos 4-1 to get their title defence off to a flying start.

In the absence of newly-crowned Ballon d’Or winner Karim Benzema, Didier Deschamps desperately needed someone to fill his shoes, with Olivier Giroud reporting for duty.

After failing to score in his nation’s scintillating 2018 campaign, Giroud’s role in the team’s success in Russia was widely overlooked, but Tuesday’s brace put him back on the map.

But Les Bleus will need the Paris Saint-Germain entertainer at his peak powers if they are to beat Denmark and secure progression into the knockout stage with a game to spare.

Unlike France, Kasper Hjulmand’s team suffered a stuttering commencement to their Qatar journey as spirited Tunisia held them to a dismal 0-0 draw at Education City Stadium.

Following an almost-perfect qualifying campaign (W9, L1), which featured a stellar average of three goals per match, De Rød-Hvide must have hoped for a more promising start.

In a three-game group cycle, every point matters, but there’s a feeling Denmark may need all three to bolster their hopes of making it out of the group phase for a second World Cup in a row.

France come into this encounter on the back of five successive victories in World Cup matches, although it’s worth mentioning they’ve never won six on the trot at the tournament.

Seeking a piece of history could prove a strong motive for Les Blues, who could become only the fifth defending champion to win their opening two matches of a World Cup campaign.

Another eye-catching milestone is on the cards, with France aiming to become the first nation since Hungary in 1954 to score 4+ goals in three consecutive World Cup fixtures.

Denmark have avoided defeat in their second group stage match across their previous five World Cup participations (W2, D3), getting on the scoresheet within 16 minutes in each of those three draws.

Speaking of draws, that’s been a common theme in the Danes’ recent outings at the tournament, as each of their last four World Cup contests has ended level.

One of the main reasons behind Denmark’s poor World Cup form has been an uneventful frontline that has failed to score twice in their last three games in the competition.

France have encountered mixed fortunes across three previous World Cup showdowns against Denmark (W1, D1, L1), going scoreless in the last two since a 2-1 victory in their first-ever such H2H back in 1998.

Having De Rød-Hvide in their World Cup group has historically been a good omen for Les Bleus, as they’ve lifted the Jules Rimet trophy on two of the previous occasions they’ve faced Denmark in the first round.

But recent history spells trouble for Deschamps’ men. They lost both duels against the Nordic country in the 2022/23 UEFA Nations League season earlier in 2022.

It’s worth noting that they had been unbeaten in five consecutive matches against the Danes beforehand (W4, D1).

On the evidence of this year’s Nations League alone, France should be outsiders against a side they lost to in Copenhagen and Paris.

However, Deschamps’ side looked like a well-oiled chopping machine in their World Cup opener against Australia and reproducing that performance should ease them past Denmark.