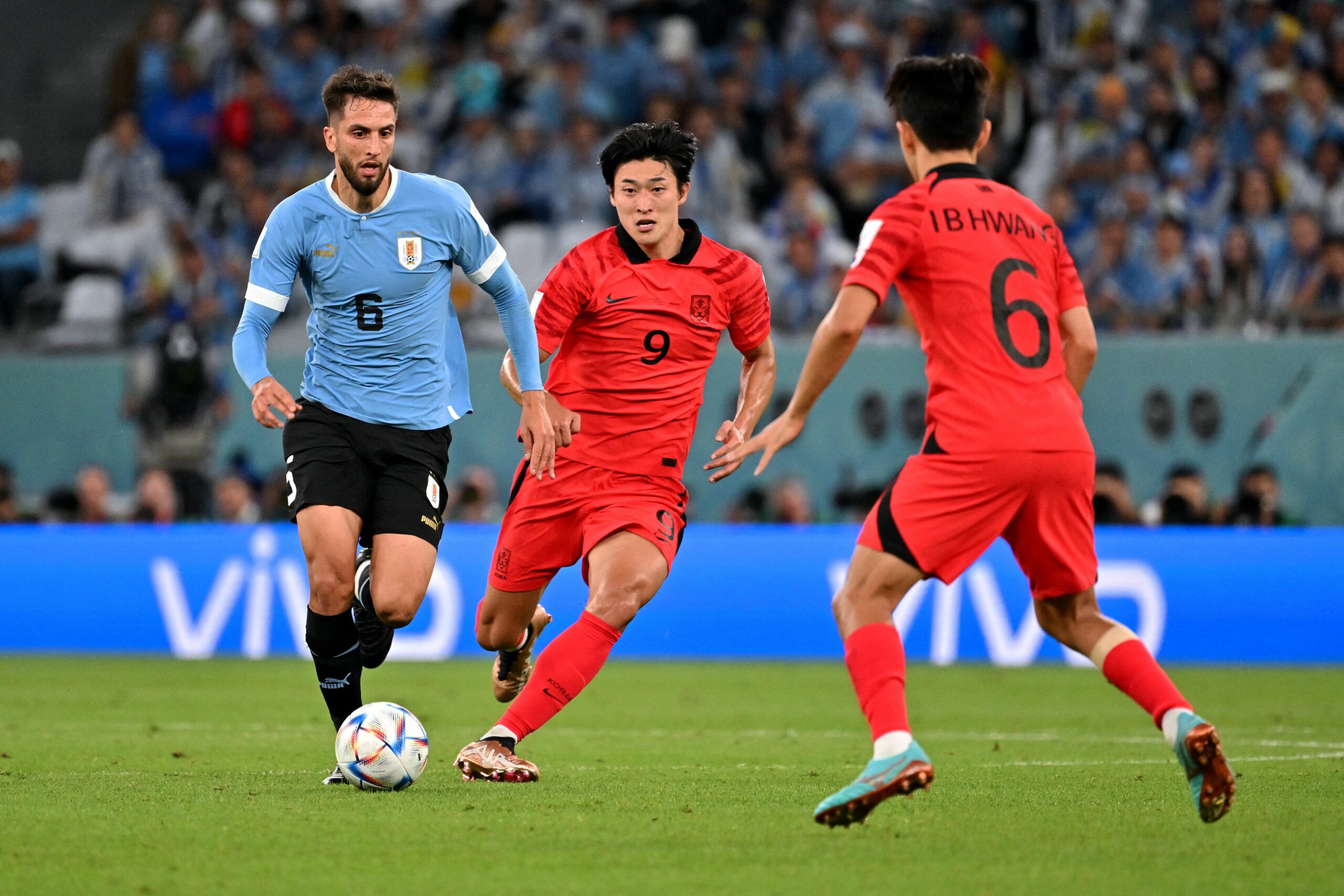 South Korea entered their 2022 FIFA World Cup Group H opener today and settled in possession early on as Uruguay struggled to win it back.

The South American side sat deep and looked to counter. After a few minutes, Uruguay began to settle and control the ball, but they did not ask any tough questions of the South Korean defence.

Napoli left-back Mathias Olivera slipped in Darwin Nunez after 28 minutes, but the pass was too heavy.

Hwang Ui-jo then missed the best chance when he skied over a great cross into the box in the 34th minute. Uruguay struck the post moments later as Diego Godin got up to meet a corner.

Both sides cancelled each other out, but the Koreans had a better game plan.

Uruguay came out swinging in the second half, but South Korea were resolute in their defending. After 48 minutes, Jose Gimenez made a sliding challenge to deny Heung-min Son a shot at goal.

Edinson Cavani replaced Luis Suarez for Uruguay, and they opted for long balls to the tall striker to escape the press. They also played more crosses into the box.

Late in the game, Fede Valverde slalomed into a good position and blasted a shot at the South Korean goal which hit the post.

Sergio Rochet 7/10) – South Korea had no shots on target, but their pressing ruffled his feathers.

Martin Caceres (5/10) – South Korea got by the veteran, and he picked up a yellow. He also didn’t add much to attack from right back.

Diego Godin (7.5/10) – The former Atletico Madrid man rolled back the years, defending his box expertly. He also came close with a vintage header.

Jose Gimenez (7.5/10) – On his day, he is one of the better defenders, and it was his day. He won everything and sprayed some long balls.

Mathias Olivera (6.5/10) – The Napoli man got forward well and defended solidly. He was always trying to make something happen.

Matias Vecino 6.5/10) – He helped move the ball forward but didn’t add enough thrust to his game.

Fede Valverde (7/10) – The Real Madrid midfielder helped circulate the ball and thudded an effort off the post in the final minutes.

Rodrigo Bentancur (7.0/10) – He helped keep the ball and move it tidily for his side. He also won his duels.

Facundo Pellestri (5/10) – The Manchester United attacker was ineffective and struggled to make anything happen.

Darwin Nunez (5/10) – He huffed and puffed but couldn’t affect the game. Errant.

Luis Suarez (5/10) – He was isolated up top and struggled to impact the game.

Kim Seung-gyu (7/10) – Like his counterpart, he did not have much to do for most of the game. His distribution was tidy.

Kim Moon-hwan (7/10) – He created the best chance of the game with a cross on 34. He was adventurous and provided an outlet for his side.

Kim Min-jae (7/10) – The Napoli defender and Manchester United target was imperious in the air and on the ground. His passing was also crisp and helped start attacks.

Kim Young-gwon (7/10) – He shut down Pellestri on the right and made him ineffective.

Kim Jin-su (7/10) – Another equally solid performance in defence. He was resolute.

Hwang In-beom (6/10) – He helped move the ball well, but it was not penetrative. He played some nice long passes too.

Jung Woo-young (5.5/10) – The Al-Sadd midfielder ran hard for his side but struggled to influence the game. He lost a lot of duels against Uruguay’s midfield.

Na Sang-ho (5.5/10) – He helped in defence, and that was it. He struggled to make any difference in attack.

Son Heung-min (6/10) – The team’s talisman tried his best but was often crowded out with special attention.