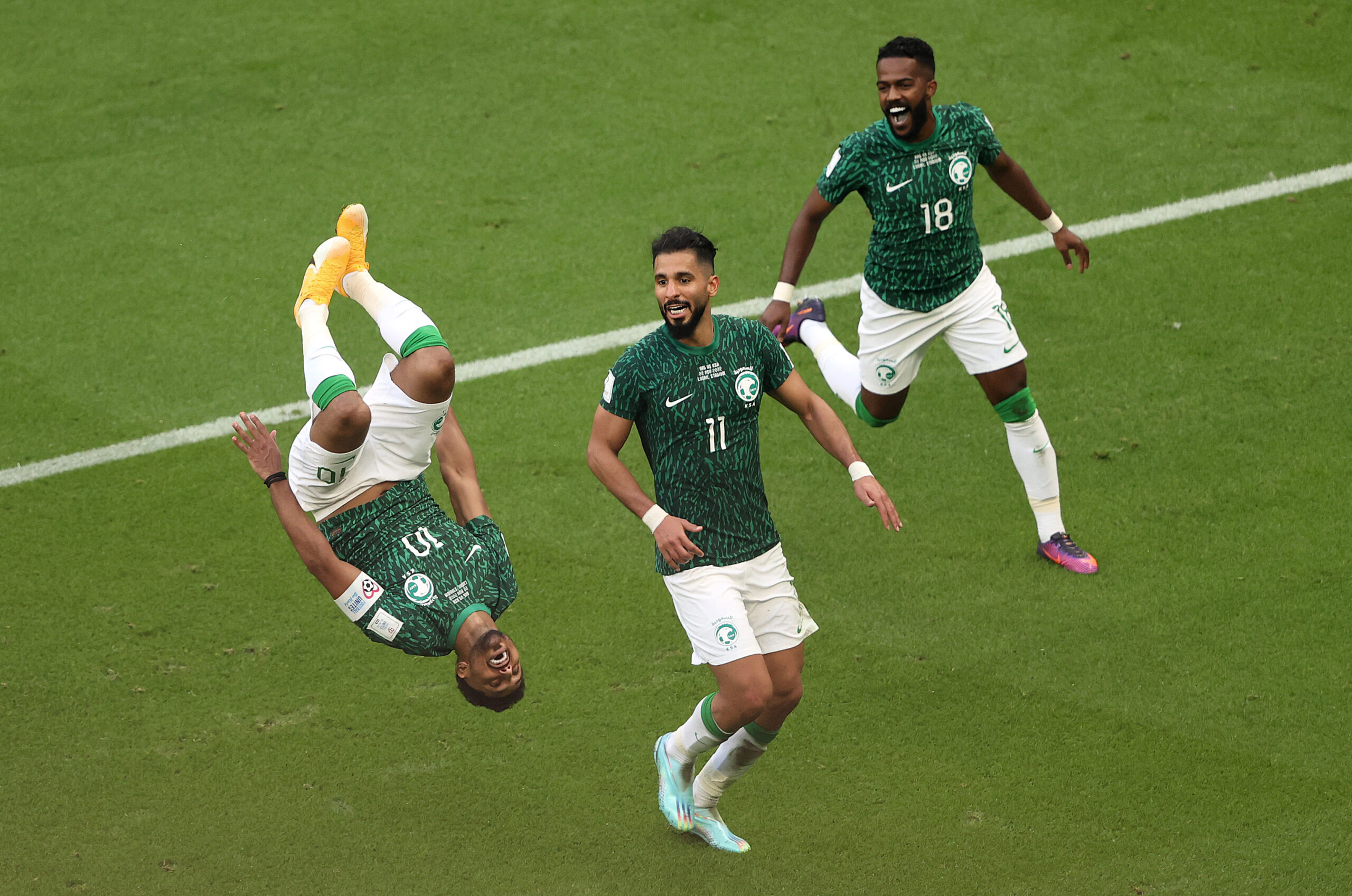 It is safe to say that the World Cup is well and truly underway now. We knew we were in for a frantic day as four matches were scheduled, but boy was the on-pitch action dramatic and exciting!

Saudi Arabia upsetting Argentina was the result that stood out, while France turned up prepared for the champions’ curse.

The action began at the Lusail Stadium, with Argentina facing Saudi Arabia in what was expected to be the most one-sided match of the day.

The first half played out as expected, with Lionel Messi giving his side an early lead from the penalty spot which they took into half-time. What stood out, though, was Saudi Arabia’s high defensive line which caught Argentina offside on eight occasions — more than their tally in the entirety of the 2018 World Cup.

This bold tactical approach kept Argentina on their toes and didn’t allow them to settle, which is something that Saudi Arabia would take advantage of in the second half. In the 48th minute, Saleh Al-Shehri scored with his team’s first shot of the match, and five minutes later, Salem Al-Dawsari put them in front with a wonderful individual effort.

Hervé Renard’s side naturally decided to dig deep and defend thereafter, but they did not abandon their high-line approach for a while. They only started to drop deep with 15 minutes left when they switched to a back-five, which even became a back-six for the last few minutes.

So, Saudi Arabia held on to their lead and pulled off one of the biggest World Cup upsets to kick their tournament off. As a consequence, Argentina failed to equal Italy’s record of going 37 consecutive competitive matches without defeat and will now be playing catch-up for the rest of the group stage.

The first goalless game of the World Cup was played between Denmark and Tunisia, but the match certainly was not boring by any standards.

Both sides adopted their favoured approach to the match, as Denmark kept more of the ball but Tunisia defended in a compact shape with a back-five that was able to contain the Danes fairly well. The final open play xG tally of 0.28-0.56 highlights the fact that neither side managed to fashion clear-cut openings.

The closest we came to a goal was in the 70th minute when Andreas Cornelius was on the end of a flick-on at the far post, but he could only redirect the ball onto the woodwork from no range whatsoever.

Tunisia also survived a stoppage-time scare when the referee went over to the VAR monitor to look at a potential handball in the box after a corner, but a foul from an attacker in the build-up saved them.

With that, the match ended in a draw, which both sides will likely agree was a fair result. So, both remain in contention with a chance of progressing to the knockout stage from Group D.

As we know, there are various types of goalless draws, and if Denmark-Tunisia was an exciting one, Mexico-Poland was the opposite.

The match largely followed a set pattern of Mexico keeping possession (of which they had 61%) in their back line but struggling to break past Poland’s compact 4-5-1 low block.

El Tri were quite risk-averse in their pass selection, so that meant they did not give away too many counterattacking opportunities, and the Poles’ final ball proved disappointing on most occasions.

The biggest chance of the match came in the 58th minute when Robert Lewandowski was awarded a penalty after a VAR review. He had missed his last penalty for Barcelona, but there was no discussion as to who would take this one.

The 34-year-old did hit the target this time, but Guillermo Ochoa guessed right and made the save, extending Lewandowski’s wait for a World Cup goal.

That miss was balanced by Mexico’s overall domination in the match, so once again, the draw was probably the right result. The team that will be happiest with this outcome is Argentina, who are just a point behind their two main rivals for a knockout spot in the group despite their shock defeat.

Defending champions France got their World Cup campaign underway, and they suffered an early scare against Australia.

The curse of the champions was on everyone’s minds when Craig Goodwin opened the scoring in the ninth minute after a slick team move that culminated in him turning in Matthew Leckie’s pinpoint cross.

It was all France thereafter, and an equaliser was eventually scored in the 27th minute as Adrien Rabiot headed a cross home in the second phase of a set-piece. Five minutes later, he set up Olivier Giroud’s 50th international goal, which gave Didier Deschamps’ side the lead.

France were cruising through the second half, but they needed to cushion their lead for a fully comfortable end to the match. Kylian Mbappé did just that in the 68th minute, before setting up Olivier Giroud for his brace, which equalled a French record.

With that, France coasted to the top of their group and are on course to avoid falling prey to the champions’ curse, although Denmark and Tunisia should be expected to be tougher opposition than Australia.

Morocco vs Croatia (13:00 AST):
Defeated 2018 finalists Croatia start the action tomorrow against Morocco, for whom Walid Regragui will make his competitive coaching debut. The Europeans will be the favourites for this fixture, where a win for them might apply a bit of pressure on Belgium later on.

Germany vs Japan (16:00 AST):
Hansi Flick will take charge of his first World Cup match after having watched on as an assistant previously when Germany face Japan, who will not find life easy in the difficult Group E.

Spain vs Costa Rica (19:00 AST):
The other Group E match kicks off thereafter, as Spain take on Costa Rica, who they will be expected to beat comfortably. Scoring goals has been somewhat of a problem for Luis Enrique’s side, but this game could give them some more confidence before the crunch fixture against Germany this weekend.

Belgium vs Canada (22:00 AST):
Like Wales, Canada will make a long-awaited return to the FIFA Men’s World Cup tomorrow, although their waiting period was a relatively shorter 38 years. They will come up against some very tough opposition straight off the bat, as the second-best team according to the FIFA rankings will look to defeat them.