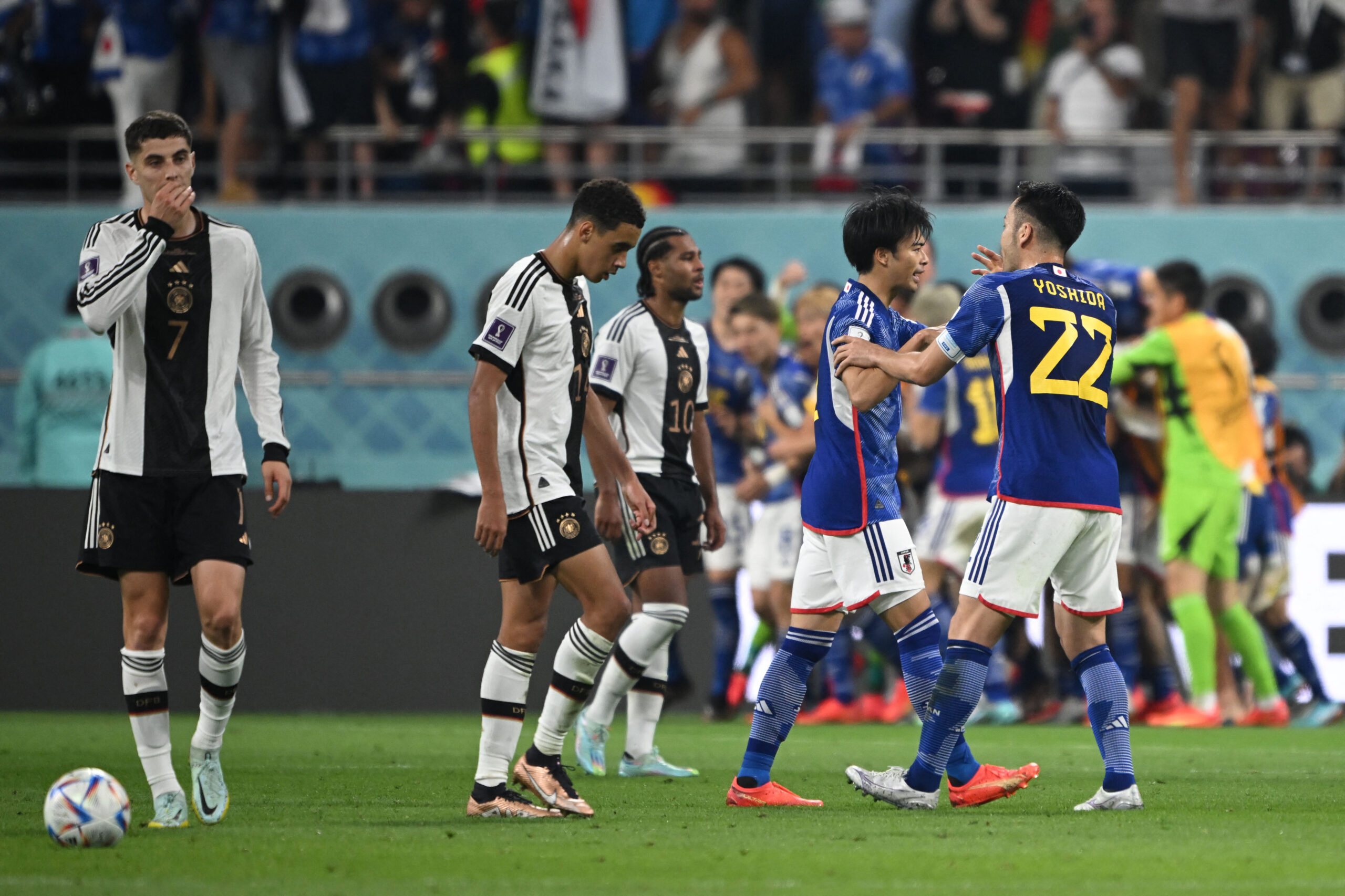 Ilkay Gundogan’s penalty after a foul from goalkeeper Shuichi Gonda on David Raum saw the Germans take the lead in the first half.

Germany had the game under their control until the final quarter, as Japan had hardly tested Manuel Neuer.

The Bayern Munich goalkeeper was called into action for the first time when he made a stellar save to deny Junya Ito’s shot.

The Samurai Blue quickly grew into the game after that missed opportunity, and they netted the equaliser through substitute Ritsu Doan.

Hansi Flick’s men hit rock bottom after Takuma Asano, another player from the bench, scored a stunning goal in the 83rd minute to complete an incredible turnaround.

Germany’s complacency in attack and failure to hold their nerve in the final stages contributed to their shocking defeat.

By contrast, Japan produced an excellent display to secure another upset in this World Cup, just a day after Saudi Arabia stunned tournament favourites Argentina.

Die Mannschaft faced a humiliating exit from the group stage in the 2018 World Cup, and they are now in early trouble after today’s setback.

Manuel Neuer (6/10): Seemingly had won the game for his side after that stellar save against Ito. But conceded two goals in quick time. Didn’t get help from the defence but should have done better against Japan’s winning strike.

Antonio Rudiger (6/10): The only bright spot in an otherwise awful defence. Looked at his best nearly the entire game. Proved too strong for the Japanese attackers.

Niklas Sule (4/10): A poor display from the Borussia Dortmund defender. Was ball-watching when Japan scored the equaliser.

David Raum (5/10): Won the penalty in the first half. Looked a bit handy moving forward but offered a little less in the defence.

Ilkay Gundogan (7/10): Best performer for the Germans. Scored their only goal, hit the woodwork once and anchored the midfield brilliantly. Was taken off early in the second half.

Jamal Musiala (5/10): Did all the mastery with the ball but was poor with his finishing. A dismal performance, given his rich vein of form with Bayern.

Thomas Muller (4/10): Nowhere to be found in the game and was taken off in the second half.

Kai Havertz (4/10): A night to forget for the Chelsea forward. Had a goal ruled out for offside.

Leon Goretzka (4/10): Spurned a great chance to pull off a draw in the final minutes.

Shuichi Gonda (7/10): An eventful night for Japan’s No.1. Conceded a penalty but redeemed himself by making a string of crucial saves.

Maya Yoshida (7/10): A captain’s performance from the veteran centre-back. Held his cool even in pressure situations.

Kou Itakara (6/10): A helping hand for Yoshida in the backline.

Hiroki Sakai (6/10): A solid display from the former Marseille full-back. Kept Musiala and Raum in check on a few occasions.

Yuto Nagotomo (6/10): Showed his experience both in defence and attack. Nearly provided an assist for Daizen Maeda.

Ao Tanaka (6/10): Sloppy with possession but worked hard to contain the Germans.

Wataru Endo (7/10): The unsung hero of today’s victory. The combative midfielder from Stuttgart made a vital clearance in the dying minutes.

Takefusa Kubo (5/10): Not the performance one would have expected from the former Barcelona academy graduate.

Daichi Kamada (5/10): Arguably the best player on the paper but the influential Eintracht Frankfurt star failed to exceed expectations.

Junya Ito (5/10): Looked lively in the first half. Provided the assist for Maeda’s disallowed goal.

Daizen Maeda (4/10): A struggling performance from the Celtic striker. Had a goal ruled out for a clumsy offside.

Ritsu Doan (7/10): Turned the table on Germany’s head with an immediate impact off the bench. Worth the hype the Freiburg prodigy is all about. Should start in the upcoming games.

Kaoru Mitoma (7/10): Equally important as the goalscorers. Initiated the attack that led to the equaliser.