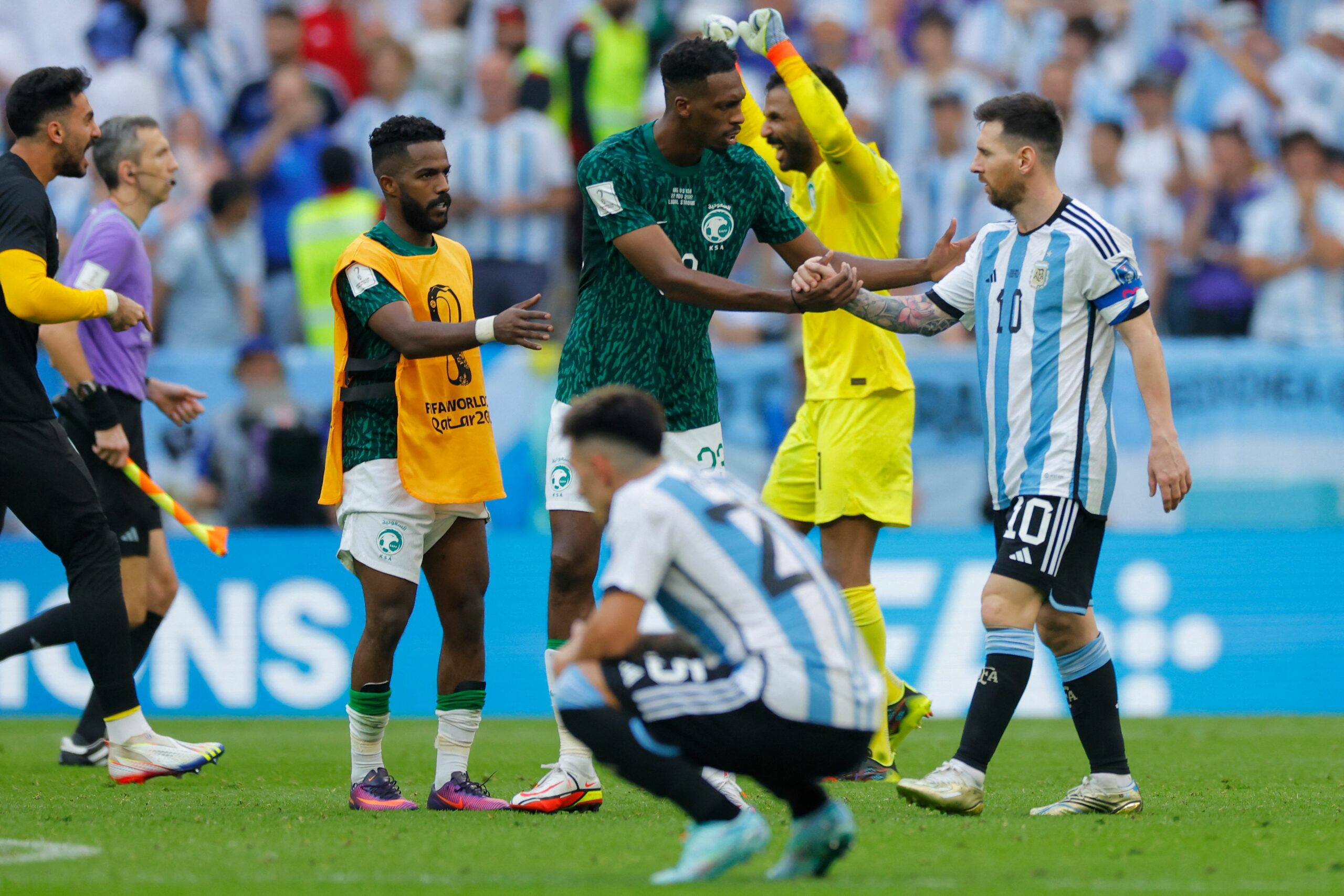 World Cup favourites Argentina came into the game against Saudi Arabia raring to go, but things ultimately did not go to plan.

The contest was fiery in the early moments, and Saudi Arabia conceded a penalty early on. Ali Al-Bulayhi pulled Leandro Paredes down in the box, and VAR called the referee’s attention to it. He gave the penalty.

Messi stepped up and rolled the ball into the net to give his side the lead in Qatar.

Herve Renard’s side tried to respond to going down, but they left gaps at the back. Messi appeared to have doubled their lead after 21 minutes, racing onto a through ball before slotting home. However, the flag went up for offside.

VAR denied the Albicelestes another goal a few minutes later. Lautaro Martinez raced on to a brilliant through ball and provided a delightful chip to match. However, Messi’s involvement in the build-up allowed VAR to intervene and rule it out.

Martinez scored again in the 34th minute with another sumptuous finish, but the flag was up again. The high defensive line of the Falcons kept allowing Argentina to get behind them, especially as they didn’t have possession.

Argentina went into the half-time break with a slight lead, but it was uncomfortable.

Saudi Arabia turned the game around in the first eight minutes of the second half. Saleh Al-Shehri raced onto a pass beyond a slow-to-react Cristian Romero before beating Martinez for the equaliser.

It was Saudi Arabia’s first shot on target, and they took it superbly. The goal stunned Argentina but what happened next sent them into shock.

Salem Al-Dawsari showed incredible balance, speed, awareness and footwork before angling a shot beyond Martinez. Argentina looked rattled while their counterparts were pumped.

Saudi Arabia stunned Argentina in their Group C opener at the 2022 FIFA World Cup and secured a very famous win.

Emiliano Martinez (6.5/10) – The Aston Villa goalkeeper could have saved the second goal as he got a hand to it, but he only pushed it into the top corner.

Nahuel Molina (6/10) – He didn’t provide enough threat, especially as he had space to attack. He was not tested much in defence but held his own.

Cristian Romero (5/10) – The centre-back should have done better to block off Al-Shehri for the first goal, and it was no surprise that Scaloni took him off.

Nicolas Otamendi (7/10) – The veteran was more composed than his partner in defence and won his duels.

Nicolas Tagliafico (7.5/10) – Like his other full-back, he was limited in attack but defended well when the challenges came.

Rodrigo De Paul (6.5/10) – The Atletico Madrid man played some nice passes in the first half and was at the heart of everything but failed to control the second as Saudi Arabia snapped at their feet.

Leandro Paredes (7/10) – He was near flawless in the first half but struggled in the second half when Saudi Arabia turned on the heat.

Alejandro Papu Gomez (5/10) – The former Atalanta man was anonymous in the first half, parked on the left. He struggled to make an impact.

Lionel Messi (7.5/10) – The Paris Saint-Germain attacker constructed attacks for his side despite being targeted constantly. He scored the only goal of the game for Argentina.

Lautaro Martinez (6.5/10) – He showed some brilliant movement, but his linkup play struggled with Saudi Arabia pressure.

Angel Di Maria (7/10) – Huffed and puffed to make something happen. Put in some dangerous crosses, but they were not enough on the day.

Mohammed Alowais (8/10) – He made great saves to keep his side in the game against the South Americans. A heroic performance.

Yasser Al-Shahrani 6/10) – He struggled to deal with Di Maria throughout the game, but he did enough to put off the Juventus man.

Ali Al-Bulayhi (7/10) – This was a solid performance from the veteran to keep Argentina out. He helped play a successful high-line/offside trap.

Hassan Altambakti (8/10) – He put in some brilliant last-ditch tackles to stop Argentina and was resolute throughout.

Saud Abdulhamid (7/10) – He was dogged and daring. He kept Papu Gomez and Tagliafico very quiet.

Salem Al-Dawsari (7/10) – Kept quiet in the first half but sprung to life in the second to win the tie for his side.

Salman Al-Faraj (7/10) – The Captain worked hard to destroy any control Argentina had in the game. He shut down attacks with brilliant and quick pressing.

Abdulelah Al-Malki (7/10) – He shielded his defence doggedly. Put in the tackles in the middle of the park and won his duels.

Mohamed Kanno (7.5/10) – The 6ft3 powerhouse midfielder was crucial in dethroning the Argentine midfield in the second half, closing down attack after attack.

Firas Al-Buraikan (6/10) – He struggled to get going in attack but did his best to help out defensively.

Saleh Al-Shehri (8/10) – Showed brilliant linkup/holdup play to bring his side into the game. He got only one chance and netted with ruthless precision.