This Week In Football: Bayern and Barcelona back on top, Serie A chasing pack struggling & more 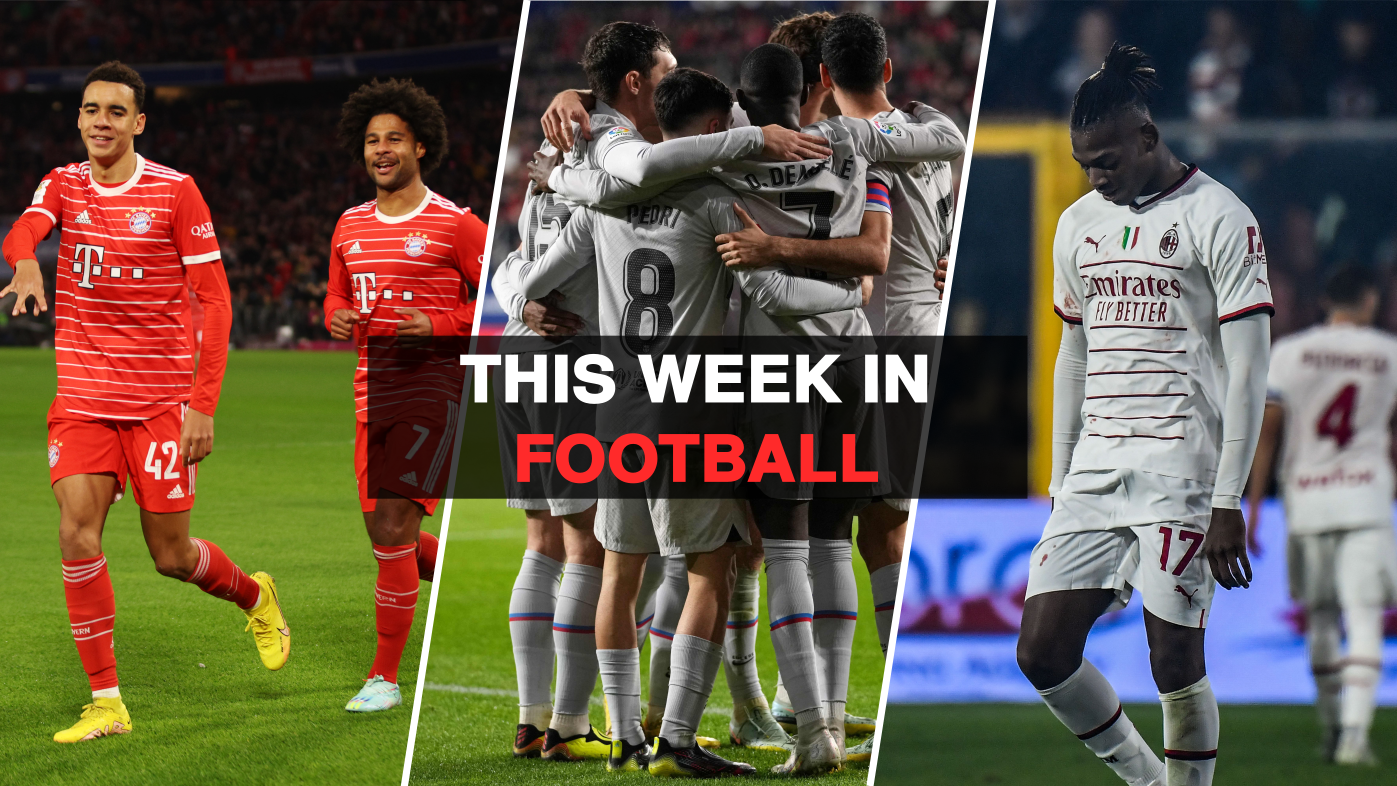 The last week of club football action before the World Cup saw the biggest competitions and clubs across Europe and the world play some of their last matches of the calendar year.

We will review some of them in this edition of This Week In Football.

There was talk of an actual title race in the Bundesliga this season when Union Berlin were leading the way, but Bayern have now amassed a sizeable lead.

That involved Union dropping points with a loss against Bayer Leverkusen on the weekend and a draw with Augsburg in midweek, while Bayern continued to steamroll anyone that dared to stand in their way.

On Tuesday, that unfortunate side happened to be newly-promoted Werder Bremen, who were otherwise enjoying a very good season so far that moved them all the way up to 7th place. A trip to the Allianz Arena was always going to be a daunting task and it did not end well.

Jamal Musiala put Bayern in front just six minutes in, and even though Bremen equalised soon thereafter, some quickfire goals from Gnabry, Goretzka and Gnabry again gave Bayern a three-goal lead before the half-hour mark.

Late in the match, Gnabry completed his hat-trick and Matthys Tel got on the scoresheet too to cap off a commanding win for the defending champions.

The reality is that Bayern are once again far too good compared to the rest of the sides in the Bundesliga, so a title race is not on the cards.

We have new league leaders over in Spain too, where Barcelona have profited from Real Madrid’s slip-ups. After Barcelona beat Almería in midweek, Carlo Ancelotti’s side lost to Rayo Vallecano on Monday to cede top spot.

So, when Barça visited Osasuna in midweek, they knew a win would ensure they went into the World Cup break in first place.

Things got off to a sub-par start for them, as David García opened the scoring in the sixth minute. To make matters worse, Barcelona went down to ten men at the half-hour when Robert Lewandowski picked up a second yellow card.

Barcelona fought back in the second half, equalising just minutes after the restart through Pedri. The tiring Osasuna players did not pose much of an attacking threat as the match wore on, so substitute Raphinha’s looping header over the goalkeeper in the 85th minute proved to be the winning goal.

Madrid’s win over Cádiz means that Barcelona’s lead remains two points, but with Copa del Rey matches this weekend, the next time they will risk losing it will be after the World Cup.

Things might be tight at the top in Spain, but that is certainly not the case in Italy, where Napoli’s lead seems to get bigger every week.

They kicked off the midweek Serie A action on Tuesday with a 2-0 win over Empoli, after which second-placed Milan took on newly-promoted Cremonese.

You would expect the defending champions to make light work of a side in the relegation zone, but they fielded a second-string side that struggled to create clear-cut openings.

Milan failed to score despite keeping 73% of possession, although they found the back of the net in the 57th minute through Divock Origi, but VAR adjudged him to be offside.

That is the second time in their last three league games that Milan have dropped points, and the underlying numbers also suggest that their performances are tailing off now.

After a very impressive second half of the 2021/22 season, Milan started the new campaign well but are slightly now dropping off, so the World Cup break comes at a good time for them.

It is all good news for Napoli’s title charge, as they are one of just two top-seven sides in the league not to have dropped points in the last couple of weeks.

They were playing the third-round fixtures of the Carabao Cup in England this week, where the major cupset saw League Two strugglers Gillingham get the better of Premier League side Brentford on penalties.

Gillingham are battling relegation from England’s fourth tier on most weekends, but in the League Cup, they are having quite a run after beating AFC Wimbledon and Exeter City in the first two rounds.

Hardly anyone would have expected them to pose much of a threat against a top-flight side, let alone one that was fielding a fairly strong XI, but some efficient attacking, resolute goalkeeping and poor finishing from their opponents helped them take the match to penalties after 1-1 draw in normal time.

The visitors went first and were faultless with their first five efforts. Brentford followed suit, but their sixth attempt by Mikkel Damsgaard hit the crossbar and stayed out to let Gillingham advance.

This is the first time since the turn of the century that the Gills have reached the fourth round of this competition. They have never made it past this stage, and since their opponents will be Wolverhampton Wanderers they will need to pull off another such upset to break that record.

The penultimate round of Brasileirão fixtures were played in midweek. With the title already decided, the focus was on the relegation battle, which was as good as decided in Athletico Paranaense’s visit to Atlético GO.

The home side needed a win to realistically keep their survival hopes alive, which they were on course for after opening the scoring in the 51st minute. Ten minutes later, though, a long-range strike from David Terans levelled the scores, and that is how the match finished.

Cuiabá’s loss on Thursday night means that Atlético GO could still mathematically avoid relegation, but they will need to win, hope that Atlético lose and overturn a -6 goal difference swing in the process to do so.

We are approaching the final weekend of club football before the World Cup, and although there are not a lot of big matches, here are a couple you should be watching:

🏴󠁧󠁢󠁥󠁮󠁧󠁿 England: Newcastle United vs Chelsea (Saturday, 15:00 UTC)
After a London derby defeat to Arsenal last weekend and Carabao Cup elimination at the hands of Manchester City on Wednesday, Chelsea need a positive result this time around, but it will not be easy to get against the high-flying Newcastle.

🇮🇹 Italy: Juventus vs Lazio (Sunday, 19:45 UTC)
A win over Inter in the Derby d’Italia last weekend and against Hellas Verona in midweek made it five straight league victories for Juventus, who have seemingly turned a corner after a terrible start to the season. Their mettle will be properly tested again against third-placed Lazio.

🇳🇴 Norway: Kristiansund vs Jerv (Sunday, 16:00 UTC)
There is not a lot left to be decided on the final matchday of the 2022 Eliteserien season as the title has been lifted, European places decided and three sides have been left adrift from the rest of the league in the relegation zone. Jerv are guaranteed to finish bottom, but above them, Kristiansund have the chance to still survive by getting a better result than Sandefjord and taking the play-off spot away from them.