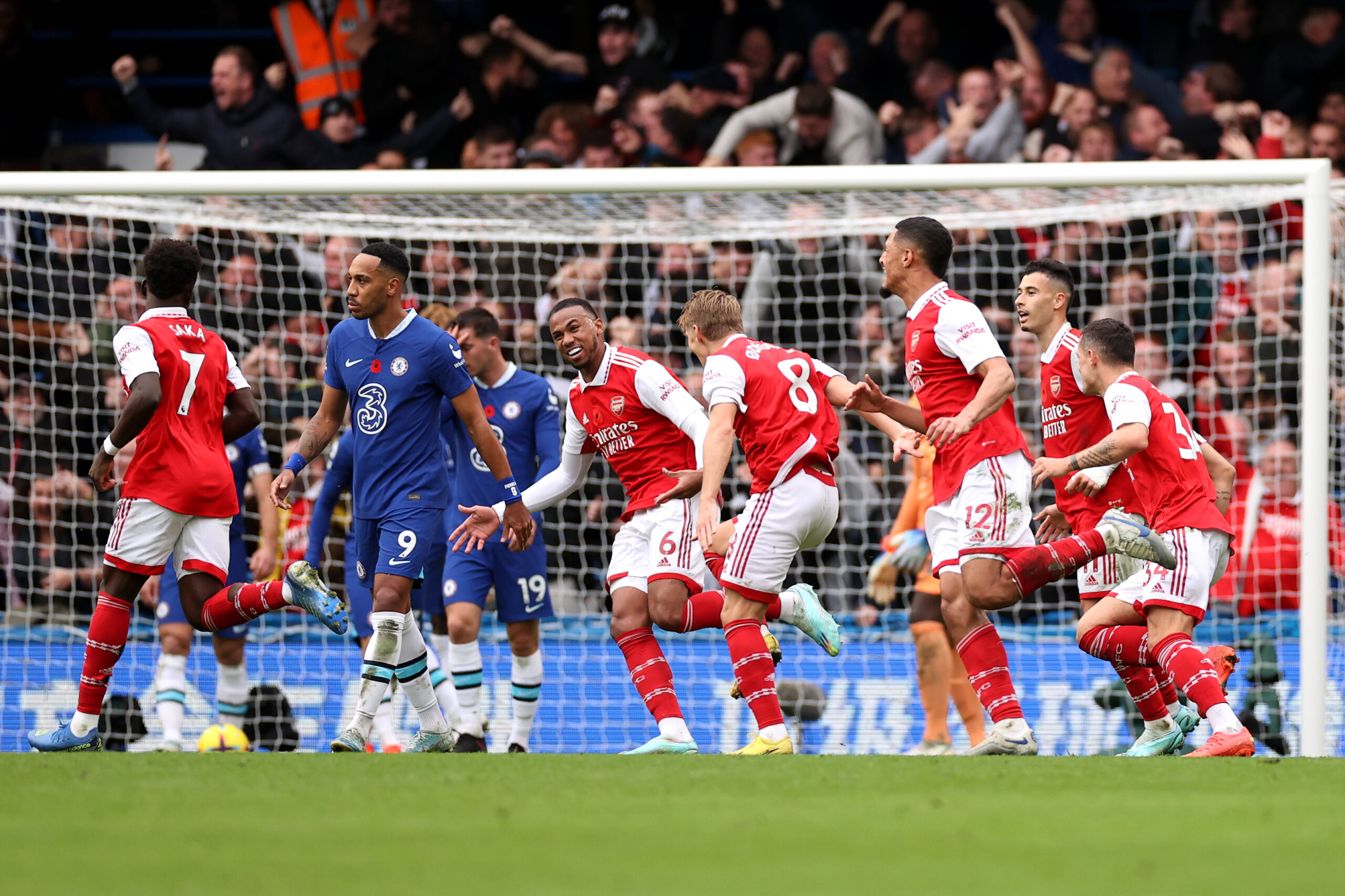 Chelsea welcomed Arsenal to Stamford Bridge on Sunday looking to halt the Gunners’ flying start to the season in their 206th meeting.

The Blues have a lot of ground to make up for domestically, while Arsenal are currently Manchester City’s main challengers for the title.

Chelsea were bidding to spoil Mikel Arteta’s 150th game as manager while their London rivals were looking to move back on top of the table after City’s win over Fulham moved them ahead in the race.

Both teams started the game with superb speed and tried to take early control. Arsenal looked sharper, but they didn’t create any openings during the early part of the game.

Thiago Silva made a great block to deny Brazilian teammate Gabriel Jesus after he won the ball from Ruben Loftus-Cheek and drove at the Chelsea defence.

Jesus missed a brilliant chance for the opening goal after 28 minutes following a lovely move from the Gunners. The cross came in from Gabriel Martinelli, but Jesus could not convert the chance.

Kai Havertz had an opportunity for Chelsea but fired a tame shot at Aaron Ramsdale after Raheem Sterling slipped him in.

Arsenal’s defence bullied the German attacker early in the game, but he did not stop probing.

Arsenal were getting joy down Cesar Azpilicueta’s side and used it to get at Chelsea, but the scoreline remained goalless at half-time.

Both sides continued to feel each other out without showing anything decisive. However, Arsenal stepped things up ten minutes into the second half.

Odegaard put in a delicious inverted cross that Thomas Partey took off the head of Martinelli, who was in a better position. It was a sign of things to come.

Arsenal opened the scoring in the 62nd minute. Bukayo Saka whipped in a dangerous corner that Gabriel Magalhaes turned in on the line. Chelsea’s defending of their near post for the goal was abysmal.

Chelsea tried to reply immediately through Armando Broja who had replaced the disappointing Pierre-Emerick Aubameyang, but William Saliba was imperious against the Albanian.

Broja drove into a superb position after 74 minutes, before delivering in a terrific cross that did not find any of his teammates.

From the resulting counter-attack, Arsenal nearly doubled their lead. Jesus went on a brilliant run before finding Odegaard, who fired over.

Chelsea started to probe as they searched for an equaliser. Sterling put in a dangerous cross that Ben White cleared. Saliba cleared another ball from Conor Gallagher.

Edouard Mendy 6.0: The 2020 African Cup of Nations winner did not have much to do but stepped up to make catches when he was needed.

Cesar Azpilicueta 5.5: Arsenal got a lot of joy down his side but down his side. Martinelli got the better of him more than once.

Trevoh Chalobah 7.0: Defended well for most of the game as Chelsea nullified the Arsenal attack.

Thiago Silva 7.5: Super blocks and interventions every time his team needed him. Silva was arguably his side’s best player.

Marc Cucurella 6.0: He was indecisive in defence and anonymous in the attack. The Spaniard didn’t do much wrong, but not much right either.

Jorginho 5.5: His lack of athleticism was on show again, and he failed to establish any control of the game. Arsenal zipped past him at will.

Ruben Loftus-Cheek 5.5: A poor showing from the Cobham academy graduate as he struggled for much of the game until he went off.

Mason Mount 6.0: Huffed and puffed but did not show anything near his usual quality. He gave the ball away a lot too.

Raheem Sterling 6.0: A lot of running but no decisive actions.

Pierre-Emerick Aubameyang 5.5: After a lot of hype considering his history with Arsenal, he was anonymous for most of the game, and an ill-timed tackle was his most notable contribution.

Kai Havertz 5.5: It was too easy for Arsenal to defend him. He lost too many duels, and his lack of 1v1 dribbling ability came to the fore again.

Conor Gallagher 6.5: He tried to add a spark, but Chelsea were just too flat.

Armando Broja 7.0: He was a big positive for Chelsea. He tried to make things happen.

Aaron Ramsdale 7.0: Chelsea did not throw anything at him as his defence stood firm. He distributed the ball well.

Ben White 7.5: The Englishman did not give Mount and Cucurella a sniff down his side. Like most of Arsenal’s defence, he was imperious against a toothless Chelsea.

Gabriel Magalhaes 8.0: Resolute at the back and came up with the winning goal. It was a good day at the office.

William Saliba 8.5: Apart from one shoddy mistake that he recovered from, he defended everything thrown at him with ease and composure. Arguably the best player on the pitch.

Oleksandr Zinchenko 7.0: He was solid in his inverted wing-back role and nullified Sterling.

Thomas Partey 8.0: The Ghanaian kept things ticking and broke up Chelsea attacks before they started. Imperious in midfield.

Granit Xhaka 8.0: He put in another excellent showing in midfield today and helped control the Blues from start to finish.

Martin Odegaard 7.0: The Norwegian playmaker should have doubled the lead. However, he conducted the game expertly and helped start attacks with his incisive passing.

Bukayo Saka 7.0: The winger came up with the game-winning assist despite a quiet showing.

Gabriel Martinelli 7.5: He was lively throughout and made life difficult for Azpilicueta. He served a delicious ball to Jesus that should have been the opener.

Gabriel Jesus 7.0: Great hold-up/link-up play, but he should have opened the scoring In the first half.