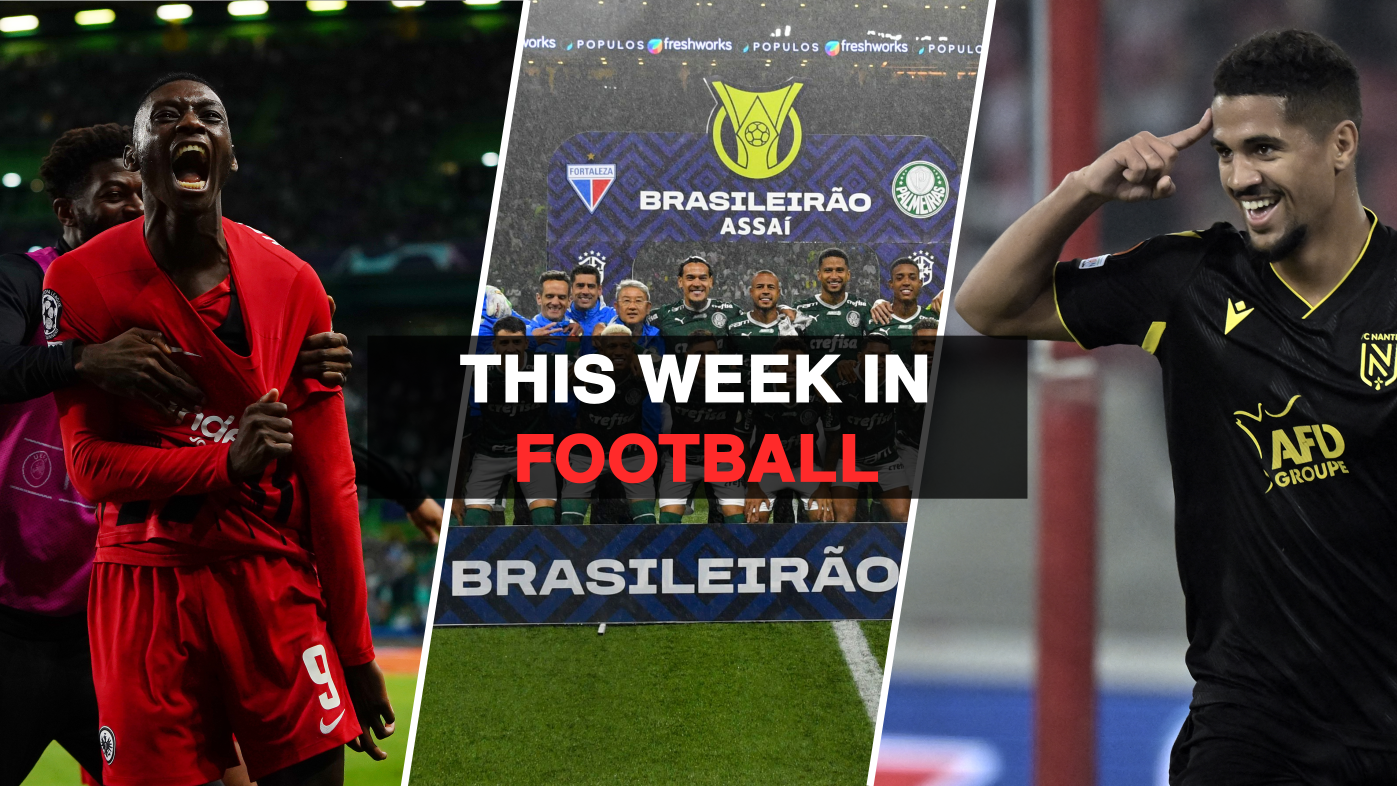 The final matchday of the group stages of Europe’s three continental competitions was played this week, so there is plenty to unpack from those fixtures.

Additionally, a couple of trophies were handed out elsewhere in the world too, which will form part of our agenda in this edition of This Week In Football:

Most of the Champions League groups were all wrapped up by the final matchday, but it was quite literally all to play for in Group D, where two points separated top spot from bottom.

The matches were such that only one side was set to progress from either. Sporting and Frankfurt were level on points, but the Portuguese side had the advantage thanks to their superior head-to-head record.

So Sporting only needed a draw to book a berth in the Round of 16, but they were on course to do better and win the group at half-time as Arthur put them in front in the 39th minute. Frankfurt only managed to attempt one shot in the first half, so they hardly looked threatening.

The visitors were given a lifeline at the hour-mark when the referee pointed to the spot after a handball offence. Daichi Kamada converted the spot-kick before Randal Kolo Muani netted his first Champions League goal 10 minutes later with a brilliant finish from a tight angle.

That ensured Frankfurt’s qualification to the knockout stage in their first-ever Champions League campaign after a match of few chances.

When the full-time whistle was blown, Sporting’s European campaign seemed to have ended as Marseille were level with Tottenham Hotspur in the other match.

However, a last-minute goal for the English side dropped Marseille down to six points, promoting Sporting to third place and gifting them a spot in the Europa League knockout phase.

The Copa Libertadores final was held last weekend, and it saw Flamengo prevail in an all-Brazilian affair. This week, the domestic top-flight league title was decided too.

Palmeiras knew they needed to win against Fortaleza to secure the 12th league title in their history, but América MG did the job for them in an earlier match by defeating second-placed Internacional.

Nonetheless, the newly-crowned champions started the party in style by putting four past Fortaleza, with the goals coming from Roni, Dudu and their latest teenage starlet Endrick. They still have three more league matches to play, but they know now that they will not be losing top spot, which they have held for the last 25 rounds of fixtures.

Palmeiras did suffer disappointment earlier this season as their streak of two consecutive Libertadores victories ended in the semi-final against Athletico Paranaense, but they now have reason to celebrate after winning their first league title since 2018.

There was a lot to play for on the final matchday of the Europe League’s group stage, and we were treated to some unparalleled drama.

All four teams in Group F finishing on eight points was the headline-grabber. Elsewhere, Roma had to mount a comeback against Ludogorets to progress, and Nantes needed help to stay in the competition.

Going into their match against Olympiacos in Greece, the French cup holders were a point behind second-placed Qarabağ FK, who were facing group leaders Freiburg.

The Germans had already qualified, but Nantes needed them to take points off Qarabağ and beat Olympiacos to move into second place.

The first condition was looking set to be fulfilled, as Freiburg took the lead from the spot in the 25th minute, and Qarabağ had a man sent off early in the second half. Nantes now knew that qualification was effectively in their hands at that stage, so scoring a goal was imperative.

Arguably their best player last season, Ludovic Blas was surprisingly omitted from the starting line-up for this game. He was sent on and half-time to try and change the game, though, and he eventually had the desired impact when he set up the all-important opener in the 79th minute with a pinpoint cross before scoring a decisive second late on.

Blas might have just one goal and one assist in the league this season, but as this pizza chart shows, his underlying performances remain pretty impressive.

On this night, he pulled Nantes through to the knockout rounds of a European competition for the second time in the 21st century.

Down in the Europa Conference League, it was almost all to play for in Group G. Turkish cup champions Sivasspor had already qualified and needed just a point to win the group, but anything was possible behind them. CFR Cluj needed a win in the other match to join them in the knockout stage, but if they failed, Slavia Prague had a golden opportunity.

The Romanian champions were up against Kosovar side Ballkani, who were participating in their first-ever season in Europe and somehow still just about in contention for second place, although they would need to win big and hope that Sivasspor followed suit. Instead, they trailed just 17 minutes in as Cluj set course for the knockout rounds.

Ballkani dominated possession throughout the match, but they struggled to create any big chances. The hosts, meanwhile, made a lot of hay in the limited time that the sun was shining for them, but they failed to convert their chances to create a cushion of comfort.

Nonetheless, they got the job done thanks to the solitary goal. Cluj have previously reached the intermediate knockout stage of the Europa League but never made it beyond, so they now have a great chance to create history this season.

The final match of the CONCACAF League — the second-tier continental competition in North America — was played on Wednesday night in Costa Rica. It was not only the (second leg of the) final of the season, but it was the very last match of the tournament itself.

The CONCACAF league only began in 2017 with no sides from Mexico or the USA, just one from Canada, and the rest mainly from the Central American and some from the Caribbean zones.

But now, after five seasons, the competition will cease to continue. Instead, from 2024, the CONCACAF Champions League will have a revamped format with more participating teams.

Honduran side Olimpia won the first-ever edition of the tournament, and they placed themselves in pole position to win the last one by beating 2019 winners Alajuelense 3-2 in their home leg of this season’s final.

They extended their lead in the 28th minute of this match, but two quick goals saw the home side level the scores before half-time. There were no goals in the first 40 minutes of the second period, so a late deflected free-kick proved decisive.

With that, Olimpia became the first and only two-time winners of the now-abolished CONCACAF League.

There will be yet more titles on offer this weekend alongside other big games, so here is what you should be looking out for:

🇯🇵 Japan: Vissel Kobe vs Yokohoma F.Marinos (Saturday, 05:00 UTC)
If you are reading from Europe, it is a good time to be an early riser as the J League title will be decided on Saturday. Yokohoma F.Marinos are in pole position to become the champions as they need just a point in their fixture, but if they lose, Kawasaki Frontale could complete a dramatic turnaround.

🇺🇸 MLS: LAFC vs Philadelphia Union (Saturday, 20:00 UTC)
Later on Saturday, the MLS Cup trophy will be given to either LAFC or the Philadelphia Union, who both won their respective conferences in the league format too and were level on points in the Supporters’ Shield standings.

🏴󠁧󠁢󠁥󠁮󠁧󠁿 England: Chelsea vs Arsenal (Sunday, 12:00 UTC)
It’s a London derby for the Premier League leaders this weekend as they make the short trip to Stamford Bridge, where dropping points could knock them off the top spot if Manchester City beat Fulham.

🇮🇹 Italy: Roma vs Lazio (Sunday, 17:00 UTC)
The big Serie A clash on Sunday evening pits Roma against Lazio in the Derby della Capitale. The two sides are separated by just a point in 4th and 5th place, but by the time the full-time whistle is blown, one of them could have a double-digit points deficit to leaders Napoli.

Stats courtesy Opta via The Analyst and Fbref, and Transfermarkt.