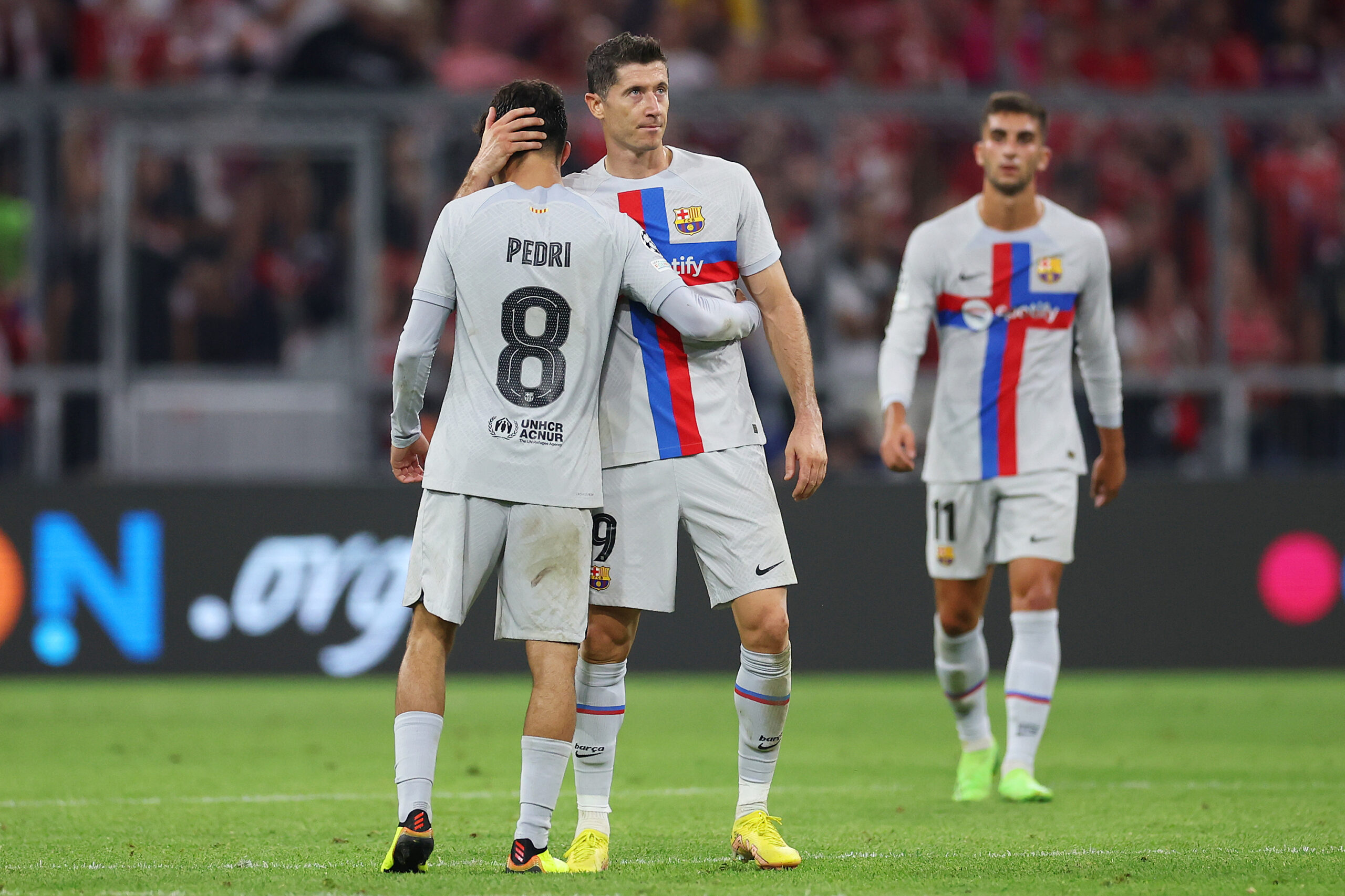 The group stage of the Champions League couldn’t have been much more exciting.

We’ve had underdog stories, late drama and several fallen giants. If the knockout stage has half as much tension, we could be in for a real treat.

Here is a recap of what happened in each group.

From the group stages, there are few who have made as much of an impression as Napoli. Luciano Spalletti’s men have been on fire, netting an unmatched 20 goals. A special mention goes to Khvicha Khvaratshkelia, who has really announced himself to the world with several stellar performances.

Liverpool may feel a little aggrieved to have finished second in the group, having picked up 15 points – a tally bettered only by Bayern Munich.

Mohamed Salah was, unsurprisingly, their standout, and currently leads the Champions League goalscoring charts with seven strikes. This includes a record-breaking hat-trick at Ibrox, hitting his treble in the space of six minutes and 12 seconds.

Ajax had to settle for a Europa League spot, picking up just six points. Nonetheless, they had a breakout star of their own, with Ghanaian youngster Mohammed Kudus also impressing.

As for Rangers, they went down as statistically the worst team in Champions League history. They lost all six games, scored just twice, and conceded on 22 occasions. One to forget.

When this group was drawn, many expected Club Brugge to occupy fourth spot. They laughed in the face of these people, comfortably qualifying for the knockout rounds with 11 points.

This wasn’t quite enough to take them to the top of the group, with Porto leapfrogging them on matchday six. The Portuguese side struggled early on, losing their first two outings, but bounced back in style with four consecutive victories.

Bayer Leverkusen had an underwhelming campaign, winning just one in six. Despite this, they will be given the opportunity for redemption in the Europa League, having finished in third.

But the big shock of the group was the plight of Atletico Madrid. The much-fancied Rojiblancos were eliminated from Europe entirely after picking up only five points. A defeat in the final match against Porto sealed their fate.

Group C instantly stood out as one of the most enticing groups, with three of Europe’s biggest clubs set to face off. And it certainly didn’t disappoint.

Bayern Munich ended the group stage as the only club with a 100% record intact. Julian Nagelsmann’s side won all six with relative ease, scoring 18 and keeping five clean sheets.

Inter Milan will join them in the next round, accumulating ten points. They booked their ticket to the knockouts with an emphatic 4-0 win against Viktoria Plzen.

Meanwhile, Barcelona’s European misery continued, as they dropped down to the Europa League for the second year running. The secondary competition will give them a shot at some consolation, but their failure to progress will come as a bitter blow after such a busy summer of spending.

Viktoria Plzen were widely touted as the whipping boys of the group, and they were unfortunately unable to spring any surprises. They lost all six matches and conceded a competition-high 24 goals.

By far the tightest group of the lot, Group D went right down to the wire in a chaotic final day. Going into matchday six, Tottenham Hotspur were top, Sporting CP were second, Eintracht Frankfurt third, and Marseille fourth. Spurs travelled to France, while Sporting hosted the Europa League champions.

At half time, Marseille and Sporting led. This left the latter top of the group, and the former in second, with Tottenham set to drop into the Europa League.

But the visitors fought back in the second half. Clement Lenglet headed home an equaliser for the Lilywhites, while Frankfurt struck twice to take themselves from bottom to top.

With just seconds remaining, it seemed as if the Bundesliga outfit would claim top spot, with Tottenham following them into the knockouts. Marseille sat in third, and Sporting were on the verge of total elimination.

But that wasn’t the end of the drama. Having survived a few late scares, Spurs hit Marseille on the break and bagged a last-gasp winner through Pierre-Emile Hojbjerg. This took them back to the summit, while simultaneously dropping the Les Phoceens to fourth place again. Extraordinary stuff.

Chelsea suffered an early scare in the Champions League, losing their opener to Dinamo Zagreb in a game that proved to be Thomas Tuchel’s last in charge. Graham Potter took the reins and cruised to the knockouts, winning four and losing none of his five European matches.

They will be joined in the round of 16 by AC Milan. The Serie A champions looked to be in some trouble with two games remaining, but back-to-back 4-0 victories took them through.

Red Bull Salzburg avoided defeat in their first four outings, putting themselves well in contention for a knockout place. Unfortunately, they were unable to maintain this form, and will drop into the Europa League.

The triumph against Chelsea proved to be the only bit of joy in a difficult campaign for Dinamo Zagreb. They racked up just one more point from the next five, cementing themselves to the bottom of the table.

It’s no secret that reigning European champions Real Madrid love this competition. Their quest for their 15th European crown continues this season, having reached the next round without too many problems.

Also progressing is RB Leipzig. Their 3-2 win over Real Madrid on matchday five was crucial, and remains Los Blancos’ only defeat of the season at the time of writing.

Shakhtar Donetsk held some hope of sneaking into the top two going into the final day. However, a disappointing 4-0 loss to RB Leipzig sent them to the Europa League.

Celtic struggled to ever get going, collecting two points and scoring just four goals. Although, their fans will take some solace in the fact that they weren’t quite as bad as Rangers.

Two things from Group G will come as a surprise to absolutely nobody: Manchester City won the group, and Erling Haaland was the group’s top scorer. The Cityzens couldn’t have made a much better start as they look to finally get their hands on that elusive European trophy.

Haaland’s former club Borussia Dortmund seemed to cope reasonably well without him. They claimed second place with nine points from their six games.

Sevilla finished four points behind the Bundesliga outfit and will subsequently go into the Europa League play-offs. Although, given their recent history in that competition, they may prefer it.

FC Copenhagen struggled to make any real impact. With just one goal from six outings, they finished the group stages as the Champions League’s lowest scorers.

Only two Champions League teams are currently unbeaten in all competitions. Both of those teams are in Group H.

There was drama right down to the dying seconds in this group, with Benfica nicking top spot off Paris Saint-Germain. Both sides were level on points and head-to-head record, when Joao Mario struck a 92nd minute goal against Maccabi Haifa. This took the Portuguese club joint with Les Parisiens on goal difference and goals scored, and above them on away goals.

Consequently, PSG find themselves with a potentially tougher round of 16 draw. The likes of Manchester City, Bayern Munich, or Real Madrid could await them in the next round.

Juventus were once again underwhelming in Europe. They lost five of their six matches, but just about qualified for the Europa League.

Last but not least is Maccabi Haifa. Despite going out entirely, the Israeli side can take some pride from their victory over Juventus in October.

The round of 16 draw is set to take place on Monday, November 7. The first legs are scheduled for February, with the second legs commencing in March.