This Week In Football: Barcelona bow out of the Champions League, Pachuca put one hand on the Liga MX title & more 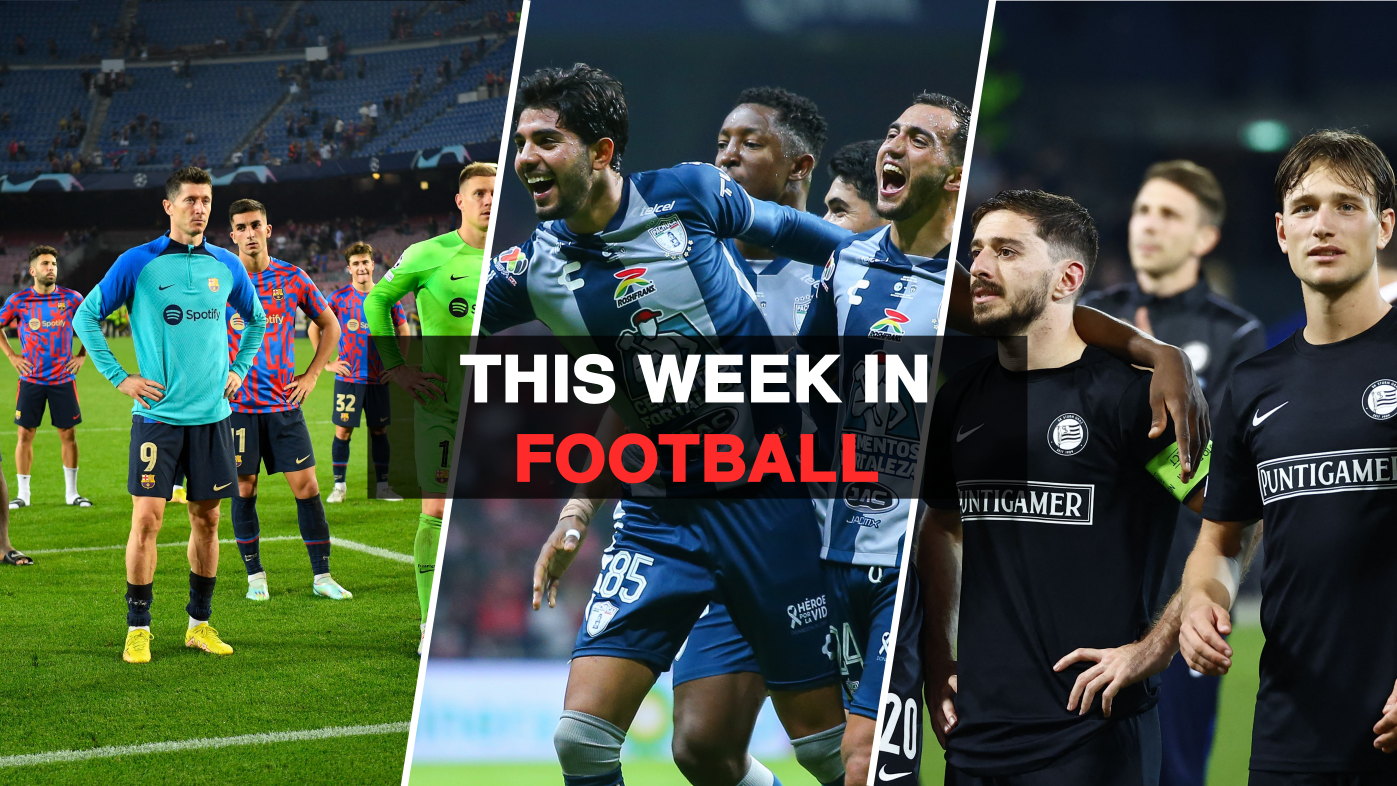 Continental European football was back again after a short hiatus, and as we approached the end of the group stages, many teams confirmed their progression to the knockout stage.

We also had a final in Mexico, which is on our agenda alongside a few other things in this edition of This Week In Football.

Over the summer, Barcelona threw the kitchen sink at their rebuild project and splashed the cash in a bid to strengthen the side to a degree that would bring them right back among Europe’s elite.

In fairness, they have a much better squad than they did last season, which could push Real Madrid all the way in La Liga, but their Champions League campaign has not gone to plan.

The trouble began at the group stage draw, where they joined Bayern Munich from Pot 1 and then got Inter from Pot 3.

It was instantly clear that we would be getting an upset from Group C, but the question was which side would go out. Bayern were having a slightly tumultuous league campaign but still were a class above the others, so the battle was really between Inter Milan and Barcelona.

Of course, the fixture list had them facing each other back-to-back on matchdays 3 and 4 in what effectively was a knockout tie in itself. Both sides went into those matches on three points having beaten Viktoria Plzeň but losing to Bayern, so it all came down to those games.

The first game was at San Siro, where Inter won a cagey affair thanks to a solitary goal. So, the pressure was on Barcelona to deliver at Camp Nou, but they could only manage a draw in a thrilling encounter that swung both ways.

Inter’s late misses just about kept a glimmer of hope alive for Barcelona, but they needed a huge favour from the Czech champions on matchday 5. Inter put four past them in the early kick-off, but the result would not have mattered either way because Barcelona lost against Bayern later on.

That drops Barcelona down to the Europa League, where they could cross paths with the likes of Arsenal, Manchester United, Ajax, Atlético Madrid and Juventus.

They are currently being regarded as the favourites to win the competition by FiveThirtyEight’s predictions model, but there still is a long way to go.

The first leg of the 2022/23 Liga MX Apertura final was played on Thursday night at the Estadio Nemesio Díez. It featured Toluca, who have gone without a title for over a decade now, and Pachuca, whose most recent league title came in 2016.

Both sides would have backed themselves for this clash. Toluca reached the final after getting the better of the mighty Club América over the course of two legs, while Pachuca thrashed Monterrey, who had finished second in the table at the end of the regular season.

The visitors needed just eight minutes to take the lead, and five minutes thereafter, they doubled it. By half-time, they had a four-goal lead, which became five in the 53rd minute.

Toluca pulled one back with just over 10 minutes of normal time left and then won a penalty deep into stoppage time to perhaps give themselves a little bit of hope, but the spot-kick was saved.

This description might make it seem that Toluca were absolutely blown away, but that was not entirely the case. They also created several good chances, but the big difference between the two sides was that Pachuca were clinical, whereas the hosts were not.

The second leg will be played on Sunday night at the Estadio Hidalgo, Pachuca’s home ground, where Toluca will need something quite extraordinary if they are to prevent what seems inevitable at this moment.

The Europa League’s Group F has been developing in a very intriguing pattern this season. All four sides came away with a win and a loss from their first two matches and then went on to draw the next two, so they were level on five points after four matchdays. They have been slightly separated, but it is still all to play for.

Lazio’s comeback win over Midtjylland in the early kick-off set things up nicely for Feyenoord’s visit to Sturm Graz, as the two sides knew that the winner would just need one point from the final matchday to guarantee progression.

The Dutch side seemed to be more threatening for most of the match, but they slowly ran out of steam late on. In stoppage time, Sturm’s substitute Otar Kiteishvilli unleashed a superb strike after a set-piece to snatch the three points for his side.

With that, the Austrians have a golden opportunity to make the knockout stages of the Europa League for the first time in their history, while Feyenoord will need to get the better of Lazio by a two-goal margin if they are to progress.

Our Europa Conference League fixture is also from Group F, where there was a dramatic all-Scandinavian affair.

Newly-crowned Norwegian champions Molde got off to a great start against group leaders, taking a two-goal lead in 21 minutes that would leave both sides tied on 10 points at the top of the group. Gent would then be three points behind them if they beat Shamrock Rovers, setting up a great finale for next week.

Ultimately none of that transpired. Gent could only manage a draw in Ireland, but more importantly, Djurgården turned the game around in the middle stage of the second half after pulling one back just before half-time to somehow steal a win in a match where they conceded twice and fired just three shots.

With that, they won the group and ensured they would go straight to the round of 16 for their first continental knockout tie since 1990, when they had faced Real Valladolid in the UEFA Cup Winners’ Cup. Molde, meanwhile, will need to avoid defeat against Gent to have a chance of joining them.

There was a little bit of Championship action on Tuesday night, and the big match saw two of the recently relegated sides face off. Both were, unsurprisingly, in the race for promotion, and Burnley had the chance to go to the top of the Championship with a win, whereas Norwich could climb up to fourth.

Vincent Kompany’s side, who look like polar opposites to the team that was wearing the same shirts a year ago under Sean Dyche, were clearly the more dominant in this match. They finished with 61% possession and a shot count of 17-5 but needed a relatively late penalty kick to come away with all three points.

In a season that seems crazy even by Championship standards as just nine points separate the promotion play-off places and the relegation zone, stability could prove to be an invaluable asset.

Burnley appear to have that as they have lost just one game (fewer than any other side) and are playing a consistent brand of football week-in, week-out, so they could be back in the big time next season.

Some titles will be handed out over the weekend and there are a few noteworthy clashes elsewhere too, so here are some matches you should be watching:

🏴󠁧󠁢󠁥󠁮󠁧󠁿 England: Brighton vs Chelsea (Saturday, 15:00 UTC)
Graham Potter will return to his old stomping ground, the Amex Stadium where Roberto De Zerbi’s side are sure to give Chelsea a real run for their money.

🇩🇪 Germany: Schalke 04 vs Freiburg (Sunday, 17:30 UTC)
Thomas Reis will take charge of his first match for Schalke against the high-flying Freiburg, who could be topping the table at the end of the weekend if other results go their way.

🇪🇸 Spain: Villarreal vs Athletic Club (Sunday, 18:30 UTC)
There also is a new manager in Spain, where Quique Setién will make his La Liga return against Ernesto Valverde’s Athletic Club, with the two sides level on points before the fixture.

Stats courtesy Opta via The Analyst, FotMob and Fbref, and FiveThirtyEight.