This Week In Football: Ronaldo receives a revelation, Flamengo campeón, Häcken on the verge of their first-ever league title & more 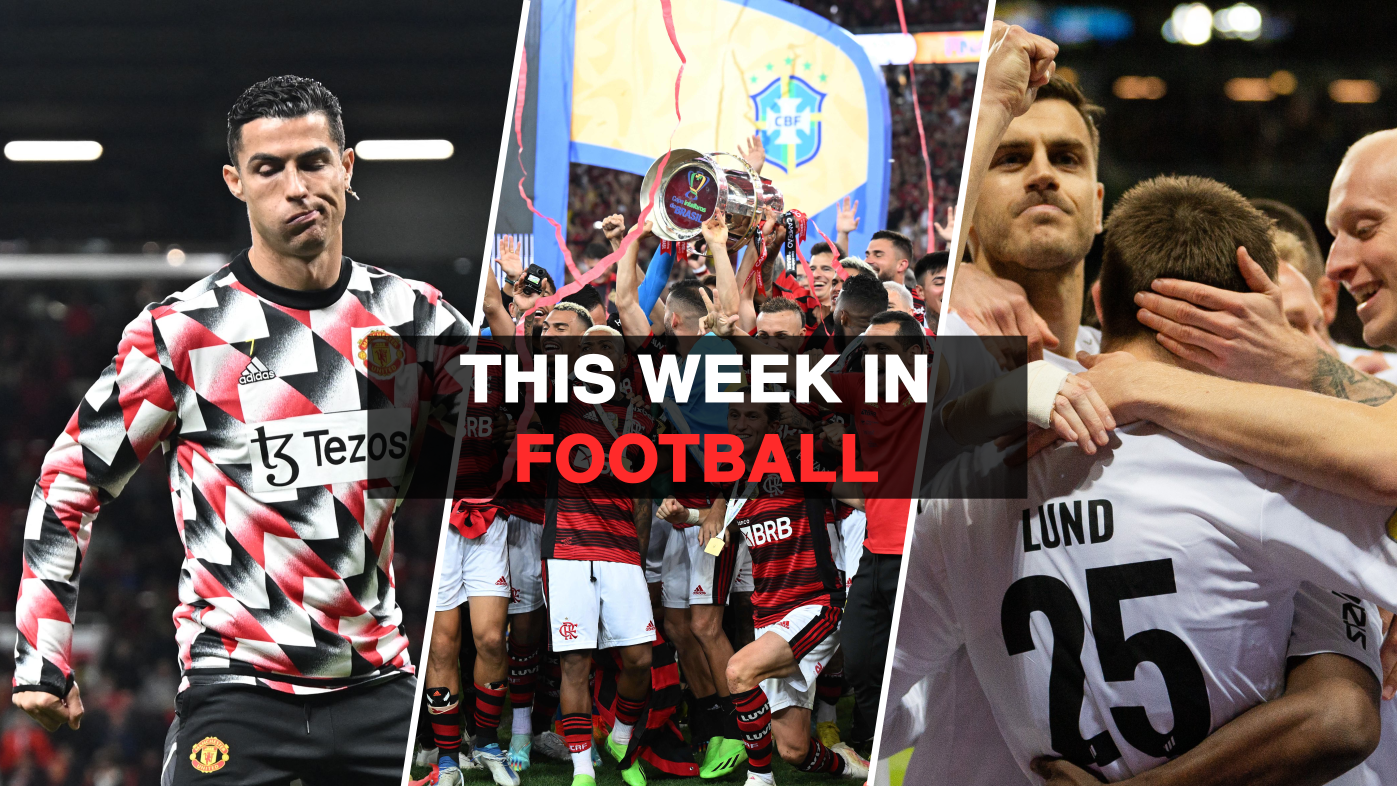 There was no continental football for once this week, but that only meant that we were treated to even more action than usual in countries across Europe and the world.

Between regular league fixtures, potential title deciders and cup ties, there is so much to cover, so we will only be able to scratch the surface in this edition of This Week In Football.

We had an almost full round of Premier League fixtures this weekend, except for Arsenal vs Manchester City, which was postponed due to the league leaders having a Europa League tie. That meant Tottenham Hotspur’s visit to Old Trafford was the headline clash of the round.

As he has consistently done throughout this season, Erik ten Hag benched Cristiano Ronaldo when he had other attacking options available.

His quest for intensity certainly proved fruitful, as Manchester United dominated the match, fired 28 shots (although the shot locations were not always great) and came away with a relatively comfortable win.

With the win in the bag in the last few minutes, Ten Hag sent on Anthony Elanga and Christian Eriksen ahead of Ronaldo, who reportedly refused to be substituted on. He then promptly stormed into the dressing room and reportedly left the stadium before the full-time whistle.

That sort of behaviour surely will not help his cause in terms of getting more playing time, so it is increasingly becoming clearer that Ronaldo’s grand return is unlikely to end positively.

It is no surprise to see that he is no longer the player he once was at 37 years of age and Ten Hag obviously recognises that, so he must do so too. He has the chance to be a leader for the younger players in the squad (like Zlatan Ibrahimović is at AC Milan), but he does not seem interested in that at all.

When asked about Ronaldo post-match, Ten Hag said that he would focus on celebrating the win first and deal with the situation the next day, which he certainly did as United announced that Ronaldo would not be a part of the squad for their next match against Chelsea.

Over in Brazil, the decisive second leg of the Copa do Brasil final was held in front of a packed Maracanã, which was quite a sight to behold.

The first leg had ended goalless, so it was a case of winner takes all in this fixture. The hosts got off to a perfect start as Pedro, their top scorer this season, added to his tally just seven minutes after kick-off.

Corinthians were forced to push hard for an equaliser as the match wore on so they kept over 60% of possession, and their efforts were eventually rewarded in the 82nd minute when Giuliano found the back of the net.

With no extra time in the cup, the match went straight to penalties. The home side failed to convert their first effort but were faultless thereafter, so misses from Fagner and Mateus Vital proved costly for Corinthians. Flamengo could find themselves in a similar situation in just over a week when they will face Athletico Paranaense in yet another all-Brazilian Copa Libertadores final.

The Allsvenskan title race has been entertaining throughout the season, but now with three matches left, one side appear to have a hand on the trophy.

Hammarby were the early pace-setters, but they dropped off around the midway point of the season, after which Häcken and Djurgården exchanged the top spot a couple of times.

After dealing a massive blow to Djurgården’s title aspirations on the weekend, AIK hosted league leaders Häcken, who had a five-point lead at the top of the table as of Tuesday.

They knew this week could prove decisive in their title charge as their next opponents were the defending champions, so their lead was still somewhat assailable for Hammarby, whose fixture list looked a little kinder.

Therefore, getting the better of AIK was a huge result for Häcken. They did so in a convincing fashion too, as Ibrahim Sadiq took just two minutes to put them in front.

After missed chances at both ends, a red card for Yasin Ayari in the 70th minute made AIK’s task very difficult, and the league’s leading goalscorer Alexander Jeremejeff made it even tougher by doubling his side’s lead in the 85th minute. John Guidetti did pull one back from the penalty spot in stoppage time, but by then it was a case of too little, too late.

After Hammarby could only manage a draw with Sirius and Djurgården’s dramatic comeback victory against the defending champions, Häcken’s lead has increased to six points.

They need four more points in their remaining three games to seal their first-ever top-flight title in over 80 years of existence. That would also be quite a turnaround from last season when they only secured safety by a margin of four points.

Some Conference semi-finals of the MLS post-season were held this week. In the West, Supporters’ Shield winners LAFC faced local rivals LA Galaxy in the fourth El Tráfico of the season.

The visitors got off to a good start, but LAFC’s summer signing Denis Bouanga gave them the lead in the 23rd minute. They were not ahead at the break, though, because Samuel Grandsir equalised on the stroke of half-time.

LAFC came out in the second half looking much more threatening, and they were eventually able to deservedly retake the lead when Bouanga scored his second of the night in the 80th minute. The Galaxy’s response was much swifter this time, as substitute Dejan Joveljić made it 2-2 within five minutes.

The final twist in the tale in this dramatic Tráfico came in the third minute of stoppage time when Cristian Arango poked home a loose ball after a corner to send the home fans at the Banc of California stadiums into raptures.

LAFC will face a club from Texas in their Conference final, and if they win that, one of Philadelphia Union, New York City FC and CF Montréal will be between them and their first-ever MLS Cup trophy.

The lack of UEFA competitions this week did not mean a dearth of cup football in Europe. We were treated to some magical cup drama in a host of countries, so much so that we could write a whole separate column about those matches.

Between amateur side Kozakken Boys getting the better of Vitesse in the Netherlands, third-tier Hlučín knocking out Czech champions Viktoria Plzeň, third-tier Iváncsa sending Hungarian giants Ferencváros packing and third-tier Wiener SC defeating local rivals Austria Wien, we are really spoilt for choice as to what match we should highlight, but we will go with Aarhus Fremad’s thrashing of Brøndby in Denmark.

Aarhus Fremad once were a Superliga side before the turn of the century, but now play all the way down in the third tier. They had never made it past the third round of the cup in the last 18 years, but that has changed now, as they subjected capital club Brøndby to their biggest-ever defeat against lower-league opposition. We’ll let the scoreboard at the Riisvangen Stadion tell you the final result:

Another weekend of exciting action is in store for us, so here are the big games you should keep an eye on:

🇵🇹 Portugal: FC Porto vs Benfica (Friday, 20:15 GMT)
Portugal’s biggest rivalry, O Clássico, kicks off the action this weekend as the top two will face off at the Estádio do Dragão with three points between them. Benfica have not won the league in three years, so this will be a real test of their title credentials.

🏴󠁧󠁢󠁥󠁮󠁧󠁿 England: Chelsea vs Manchester United (Saturday, 17:30 GMT)
The Ronaldo-less Man United will face a tough visit to Stamford Bridge to take on Chelsea, who are yet to taste defeat under Graham Potter.

🇦🇷 Argentina: Boca Juniors vs Independiente (Saturday, 21:00 GMT)
The final round of Liga Profesional fixtures will be held in Argentina this weekend. Independiente’s visitors Boca Juniors have a one-point lead at the top over Racing Club, who will be facing River Plate at the same time. A dramatic title decider is in store for us.

🇮🇹 Italy: Roma vs Napoli (Sunday, 19:45 GMT)
Napoli are top of the Serie A table, are unbeaten in all competitions this season and on a 10-match winning streak, but those records will be under threat this weekend when they face Roma, who are the only Serie A side with a better xGD than them.

Stats courtesy Opta via The Analyst, Transfermarkt and Fbref.