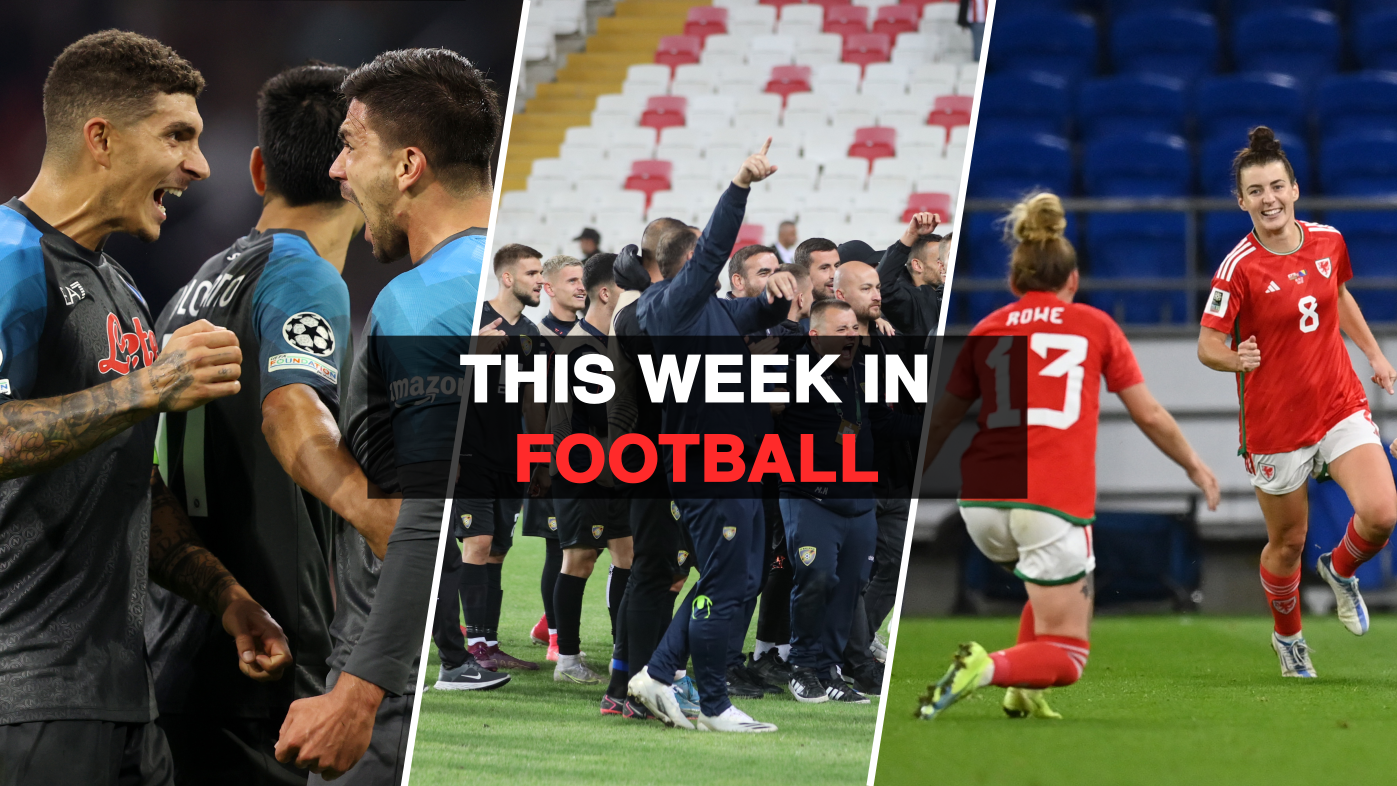 Continental club football was back after a couple of weeks of its lesser cousin, international football. There were some significant results in UEFA competitions, which we will cover alongside a couple from elsewhere in this edition of This Week In Football:

One of the big midweek Champions League ties pitted defending Eredivisie champions against Serie A leaders Napoli, who were unbeaten in all competitions this season.

This was their first Champions League campaign in three years, and it had gotten off to a perfect start with wins against Rangers and Liverpool in a very tough group.

Ajax thought that they would be the ones to dent Napoli’s superb start to the season when they opened the scoring less than 10 minutes into the match, but they were not ready for what hit them next.

Giacomo Raspadori was quick to equalise in the 18th minute, and Napoli had a two-goal lead at the break thanks to Giovanni Di Lorenzo and Piotr Zieliński.

Raspadori added another on the other side of the break, and goals from Khvicha Kvaratskhelia and Giovanni Simeone capped off a stunning display.

Raspadori has to be considered the standout performer from this match thanks to his brace and assist, which was more than deserved for his showing on the night and work at Napoli in the past few weeks.

Having moved over from Sassuolo in the summer, the 22-year-old Italian international would have expected to play as an attacking midfielder but has had to deputise as the further central attacker after Victor Osimhen’s injury.

He has done a more than admirable job in this foreign role. He has only returned with one goal in the league but scored twice in two Nations League games for Italy in the most recent international break.

Ballkani have enjoyed a historic season to date, as they became the first club to represent Kosovo in a continental competition.

They then went on to pick up their first-ever point in the Europa Conference League against Romanian side CFR Cluj on the opening matchday, but have reached incredible new heights now.

Their match against Turkish cup holders Sivasspor got off to a record-breaking start as the home side scored within 37 seconds, the fastest-ever goal scored by a Turkish side in Europe.

It was looking like Ballkani would be in for a tough night, but surprisingly, they turned the game around to lead just after the half-hour mark and even made it a two-goal cushion in the 66th minute.

Sivasspor fought back and halved the deficit with 15 minutes left to play. In stoppage time, the hosts equalised to seemingly break Kosovar hearts, but they were caught slacking after the restart as Ballkani retook the lead and subsequently registered their nation’s first-ever win in a European competition.

Just look where that leaves them in the group table:

The Welsh men’s football team created history this year by qualifying for the World Cup, and the women are just one step away now from following suit after their win over Bosnia and Herzegovina in a play-off semi-final.

After a goalless 90 minutes, Jessica Fishlock netted the decisive goal in stoppage time of the first half of extra time to take Wales to the familiar territory of a play-off final.

They had finished second in a qualifying group with France, so they have to go through the play-offs for a ticket to Oceania. Should they successfully get there, this would not only be the first-ever World Cup that their women’s side participate in but also their first-ever major tournament.

Their play-off final opponents are Switzerland, who narrowly missed out on direct qualification from their group as Italy finished with two more points than them.

The Swiss are nine places above Wales in the FIFA rankings, and their most recent competitive fixture was a 15-0 thrashing of Moldova, so they will certainly be formidable opponents.

There were several league fixtures on Monday night, including Elche’s visit to Rayo Vallecano in search of their first win of the season.

Things got off to a positive start as Lucas Boyé opened the scoring for the away side just after the half-hour, but Atlético Madrid loanee Sergio Camello quickly equalised for Rayo Vallecano before half-time.

The hosts were in the ascendency throughout the second period, but Elche got a presentable chance to come away with a win in stoppage time which went off target.

A point would not have been the worst outcome for them either as it would just be their second of the season, but they could not hold on to that as Unai López scored a 95th-minute winner to lift Rayo into the top half of the table. Elche remain rooted to the bottom of the table.

Head coach Francisco was sacked after this result, and it is easy to see why. Elche have the worst xGD in the league, as nothing seems to be working well for them.

He was not the only Spanish head coach to lose his job this week, as Julen Lopetegui was also dismissed from Sevilla after their loss to Borussia Dortmund in the Champions League.

Back in the Europa League, an important Group G clash saw Olympiacos host Qarabağ, with both sides needing a win as they were on zero and three points respectively.

After a close first half, the Greek champions were well beaten in the second period, partly thanks to some defensive errors. Qarabağ took the lead in the 68th minute and after a quickfire double in the final 10 minutes of the match, came away with a convincing win in Greece.

The Azerbaijani league leaders have never made it past the group stage in their six previous attempts, but they are on course for that midway through this campaign, even though they are in a tough group which has two sides from Europe’s top five leagues.

Here is our selection of a few matches you should be keeping an eye on over the weekend:

🇮🇹 Italy: Milan vs Juventus (Saturday, 17:00 GMT)
Defending Serie A champions Milan, who are three points off the top of the table, will host Massimiliano Allegri’s under-fire Juventus.

🇪🇸 Spain: Sevilla vs Athletic Club (Saturday, 17:30 GMT)
Jorge Sampaoli’s first match in charge of Sevilla is a very tough visit to Ernesto Valverde’s high-flying Athletic Club, who are in third at the moment.

🇩🇪 Germany: Bayern Munich vs Borussia Dortmund (Saturday, 17:30 GMT)
Germany’s Der Klassiker will be held at a rare time when neither side is in the top two spots of the table, as Bayern and Dortmund are third and fourth behind Union Berlin and Freiburg. The winner could end the weekend at the summit of the standings if other results are favourable, though.

🏴󠁧󠁢󠁥󠁮󠁧󠁿 England: Arsenal vs Liverpool (Sunday, 16:30 GMT)
Premier League leaders Arsenal face a tough test on Sunday against a stuttering Liverpool side that already has a double-digit deficit to them in terms of points.

Stats and data courtesy Opta via FotMob and The Analyst, StatsBomb via Fbref and Transfermarkt.