Analysis: Is Gareth Southgate the right man to lead England into the World Cup? 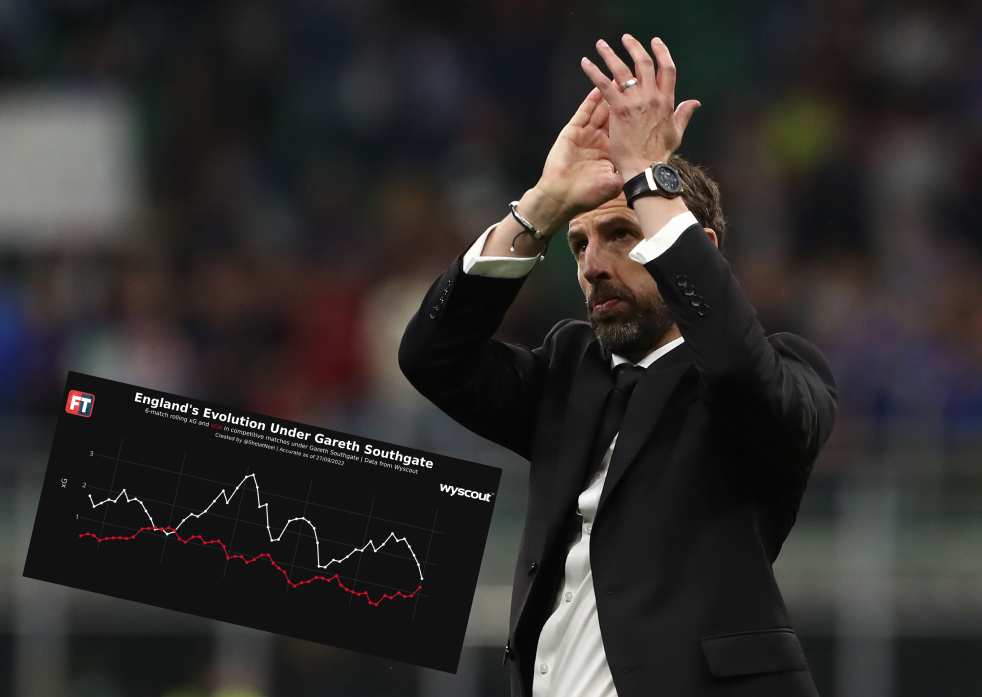 Among the sides in the Nations League A, only those from Great Britain ended the 2021/22 season without a single win.

For Wales, that is not a catastrophic record in a group with the Netherlands, Belgium and Poland, but for England, that record does not make for good reading.

Of course, the Nations League is not regarded by anyone in League A as a particularly important competition, but England will undoubtedly be disappointed about their relegation.

They should also be disappointed about failing to hold on for a win against Germany after overturning a two-goal deficit.

More importantly, this dismal Nations League campaign begs the question – is Gareth Southgate the right man to lead England into the World Cup?

There is no disputing that he has been one of the best appointments made by the FA in recent history as he took the Three Lions to a World Cup semi-final and European Championship final, but has he run his course now?

The main criticism levelled at Southgate of late is that he plays an overly defensive style of football. England have an array of incredibly talented and dangerous attackers at their disposal, so going five straight Nations League matches without scoring a goal from open play is a clear sign that something is not right tactically.

Going forward, it does rely a fair deal on the individual quality of the front three and wing-backs to create chances and score goals, but with the players that England have at their disposal both in the XI and off the bench, that is not the worst strategy (as we saw against Germany).

In that context, the real issue through that stretch of five matches without a goal from open play was that the forwards left their finishing boots at home, as the data depicts.

If anything, the primary concern from this Nations League campaign is the defence, which shipped a group-high 1tengoals. Looking back through Southgate’s tenure, it is clear that the attacking numbers have always fluctuated, but the defence has remained relatively stable.

Throughout this Nations League campaign, the rolling xGA has crept up to a figure about as bad as it has ever been in Southgate’s tenure. Coupled with the plummeting attacking numbers, England have been relegated from League A.

The defence is the area Southgate will have to address first due to his defence-first approach. As far as questions surrounding that philosophy are concerned, they are not so pertinent for the World Cup.

England are not always easy on the eye for the spectator, but this sort of approach is quite effective in tournament football.

England’s Euro 2020 campaign was a prime example of that. They scraped through the group stage with two 1-0 wins and a goalless draw. They were then frustrated in the round of 16 against Germany until their substitutes changed the match.

Ukraine proved easier opposition, but Denmark pushed them to extra time, where the Three Lions ultimately prevailed. The final against Italy was also a very close affair, where the winner was only decided on penalties.

The thing about tournament football is that no matter how exciting your attack is, sometimes it can only take one goal to derail your entire campaign. With that in mind, adopting a defensive-minded is a very sensible strategy, and it has proven to be the key to Southgate’s success in major tournaments.

While England’s defensive numbers have deteriorated over the last few months, they have not crashed and burnt, so Southgate should be backed to fix that issue at the World Cup.

Hiring a new manager with less than two months left before the competition kicks off would be a massive gamble, and Southgate has done nothing so disastrous to warrant such a decision. Much like him, the FA should take a conservative approach in this matter.

England are clear favourites in their group with Iran, United States and Wales, where they could even easily afford to lose a game and remain relatively confident of securing progression to the knockouts. Then, they would enter the perfect territory for Southgate’s style of play, so sticking with him through the winter should be a no-brainer.

Regardless of whether England want to change their style of play, continuing with Southgate is by far the best option they have for the World Cup.

Questions about the manager should be asked thereafter, but their current focus should be on preparing for Qatar 2022.

Stats courtesy Stats Perform via The Analyst and Wyscout.