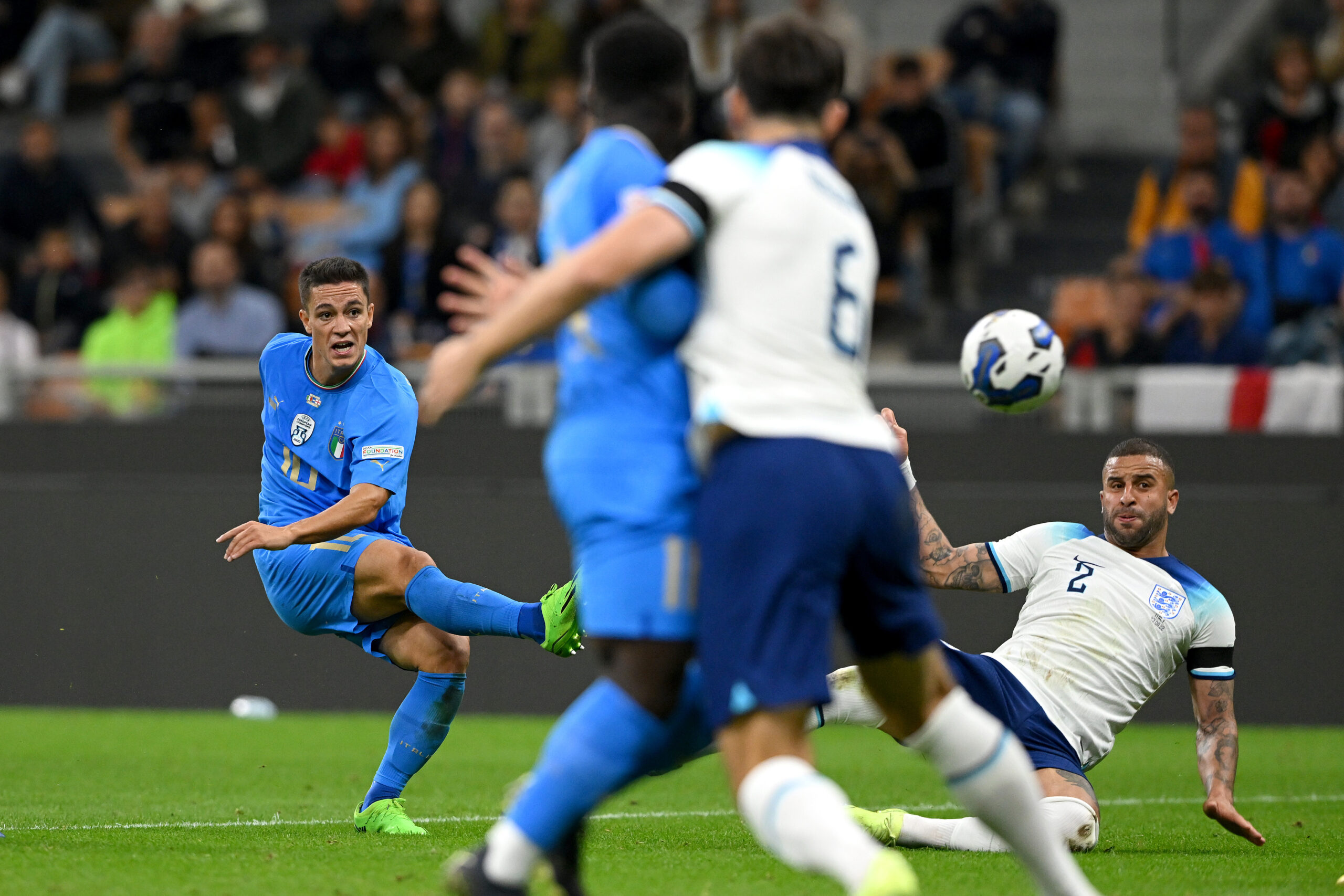 Italy kept their Nations League hopes alive with a 1-0 home victory over England.

It was a very uneventful first half, with neither side creating anything meaningful. Gianluca Scamacca came closest to opening the scoring before the break, seeing his header kept out by Nick Pope. At the other end, Harry Kane had a shot from distance fly over the crossbar.

The second half continued in the same fashion. That was until the 68th minute, when the hosts took the lead. Leonardo Bonucci picked out Giacomo Raspadori with a long pass, and the forward turned and finished into the far corner.

England pressed for an equaliser, but were unable to find a way through a resilient Italian backline. The best chance for the visitors again fell to Kane, with the captain having two quickfire shots well saved by Gianluigi Donnarumma.

But it looked more likely that Italy would grab a second goal. Second half substitute Manolo Gabbiadini went through on goal but could only fire into the legs of Pope, before Federico Dimarco’s effort deflected onto the post.

The full time whistle went, confirming Italy’s victory. The three points gives them the chance to top the group when they face Hungary on Monday. As for England, the loss sealed their relegation to League B.

Gianluigi Donnarumma (7/10) – Made a strong double save from Kane in the second half. Rarely tested otherwise.

Federico Dimarco (8/10) – A real threat down the left hand side, putting in a number of inviting crosses. Didn’t allow Foden to get the better of him.

Jorginho (7/10) – Combative and good on the ball. A strong performance from the Chelsea man.

Bryan Cristante (6/10) – Sometimes a bit wasteful on the ball, but a solid display overall.

Giacomo Raspadori (7/10) – Provided the game’s only real moment of quality with an excellently taken goal.

Gianluca Scamacca (6/10) – Had one header from a tight angle which was well kept out. Sometimes linked up well but didn’t make too much of an impact.

Nick Pope (5/10) – Can’t be blamed for the goal. Looked really shaky with the ball at his feet – a weakness which will likely keep him out of the side at the World Cup.

Kyle Walker (4/10) – Allowed Raspadori to turn far too easily in the lead up to his goal. Also played some careless passes.

Harry Maguire (6/10) – Looked nervous in the opening stages, but didn’t do too much wrong aside from that.

Eric Dier (6/10) – A fairly solid showing on his return to international duty. Won’t come under too much scrutiny.

Bukayo Saka (5/10) – Played as a left-wing-back for the first time in years. Looked fairly out of place.

Jude Bellingham (7/10) – The one bright spark for the away side. Good in possession, strong, worked hard, and always looked to make something happen.

Phil Foden (5/10) – Had a few nice touches in the first half, but failed to produce anything in the final third.

Harry Kane (5/10) – Kept relatively quiet by Italy’s defence. Came closest for England when he was denied twice by Donnarumma.

Raheem Sterling (5/10) – Showed some flashes of quality, but also lost the ball far too easily on a few occasions.