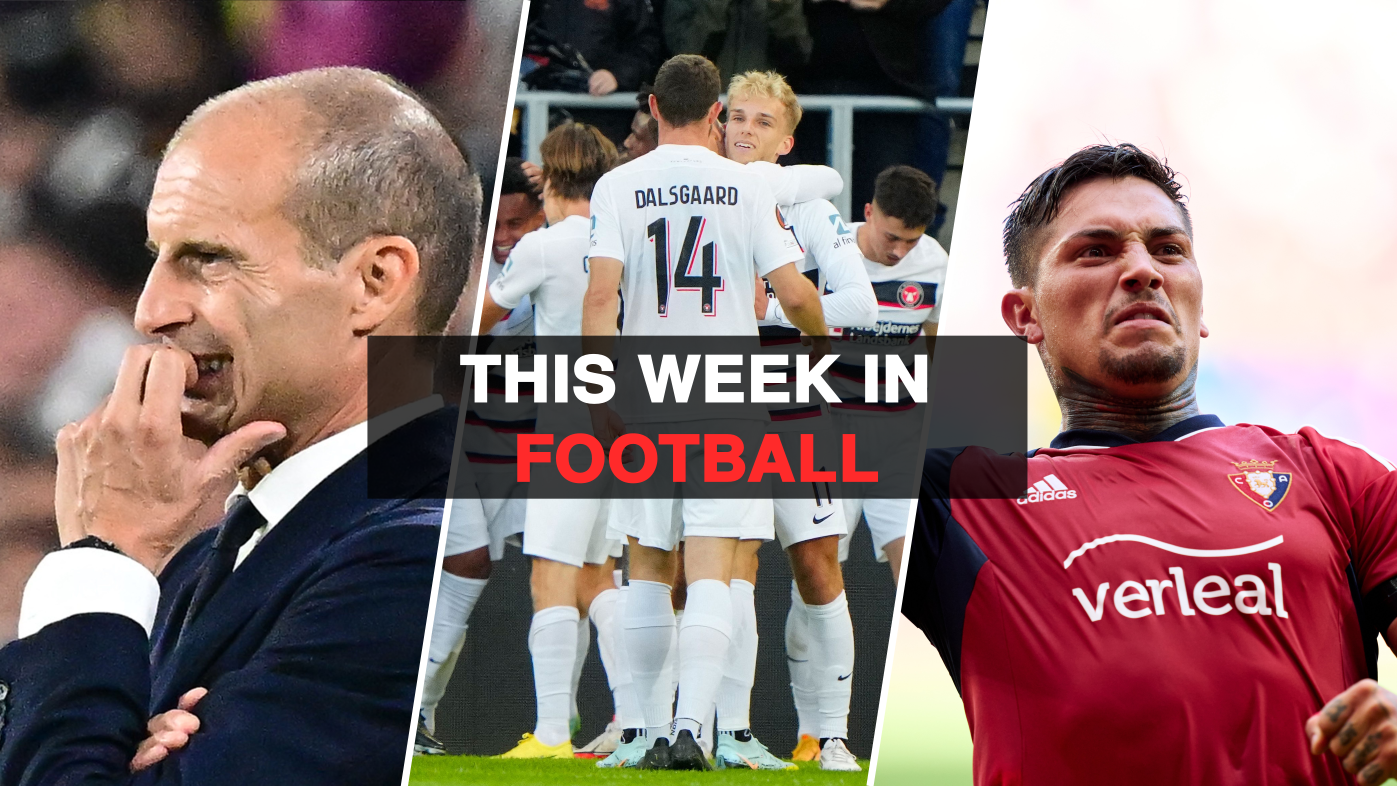 This was the last week of club football before the final international break before the World Cup, and it was filled with frantic action that we will get a respite from until the end of the month.

The continental competitions in Europe naturally took centre stage, but there were some interesting results and storylines in some leagues too.

Wednesday night saw a managerial debut in the Champions League as Graham Potter took charge of Chelsea for the first time. Over in Italy, we might have seen a manager in the dugout for his last Champions League match for the foreseeable future, at least. That man is Massimiliano Allegri, who has gone four consecutive games without a win for Juventus.

The Old Lady stayed on zero points in the Champions League this season after losing to Benfica. They took the lead after just four minutes, but it was all Benfica after that. The Portuguese side went on to turn the scoreline around before the hour-mark before holding on for a deserved win.

That made it 12 consecutive wins in competitive matches for the Portuguese side, who are also first in their domestic league with 18 points from six games.

By contrast, Juventus are down in eighth place in Serie A with just two wins from their six league matches and have an uphill task in the Champions League as six points separate them from the top two, Paris Saint-Germain and Benfica.

Initial reports are suggesting that Allegri will keep his job for now at least, but with the final international break before the World Cup coming up, the best time for Juventus to make a decision is the next few days.

Juventus’ fellow Italians Lazio did not have a much better time in the Europa League on Thursday, as they were thrashed in Denmark by Midtjylland.

After going two goals down at the half-hour mark, Lazio never looked like coming back. Even after they made it 3-1 in the 57th minute, Midtjylland took just 15 minutes to not only restore their three-goal cushion but also add to it.

This was a chastening result for Lazio and Maurizio Sarri, for whom the international break arrives at a good time as it affords them a chance to regroup. For the neutrals, though, it comes at a bad time because the drama of Group F will have to be put on hold for a couple of weeks.

There is a real surprise entry in La Liga’s top four at this point in the season behind Real Madrid, Barcelona and Real Betis – Osasuna.

The club based in Northern Spain were most recently promoted to the top division in 2019 and have finished an impressive 10th, 11th and 10th respectively in the three subsequent seasons. However, they are showing signs of stepping up and challenging for European football this season.

Jagoba Arrasate’s side have impressed with their sensible style of play that gets the most out of limited resources. Osasuna do not tend to keep the ball and have the fourth-lowest average possession in La Liga at 44%, so they often find themselves defending.

They are very good at that, though, as they have conceded the joint-lowest xG and the second-lowest xT in the league, thanks to the compactness of their 4-4-2 shape out of possession.

Their win over Almería was their fourth of the league season already — a third of what they managed in the entirety of the 2021/22 campaign. Before we get too carried away, though, it is important to note that their wins have come against two relegation candidates in Cádiz and Almería, a terribly disjointed Sevilla side and a hot and cold Rayo Vallecano.

Tougher tests await Osasuna in the future, but if they can sustain this level of performance, watch out for them as dark horses in the race for Europe in La Liga this season.

It wasn’t the best week for Italian sides in Europe. Inter, Milan and Roma did come away with wins, but they did so against sides they would have been expected to beat, while Juventus, Lazio and Fiorentina failed to follow suit.

It has been a disappointing season for Fiorentina overall. After really impressing last season and threatening to break into the top six, some smart business in the summer meant that there was expectation of something similar this time around too.

Unfortunately, that has not materialised at all, as Fiorentina sit on six points from as many games in the league and are at the bottom of the Europa Conference League group.

Last week’s draw at home against Latvian newcomers RFS was a bad way to start their campaign, but things took a turn for the worse in Turkey as İstanbul Başakşehir put three past them. It was not exactly an enthralling match, but defensive lapses and individual errors (most notably from Pierluigi Gollini for the second goal) proved very costly.

Fiorentina will have gone winless for precisely one month when they face Hellas Verona on Sunday, so their fans will be expecting to see a reaction in that match.

Around the same time as the Champions League matches on Tuesday and Wednesday night, a midweek round of fixtures in the English Championship was played.

The most significant outcome was Huddersfield Town’s loss to Wigan Athletic, leading to the sacking of their manager Danny Schofield, who was only appointed before the start of this season.

A quick glance at the league table will tell you that the decision was justified, though, because Huddersfield are down in 23rd place with just four points from eight games.

They could slip to the bottom of the table if Coventry City win one of their two games in hand. Having finished third last season, that is quite a twist in their fortunes.

Their only win this season came over a month ago when they defeated Stoke City, but since then, they have gone on to lose five of their six games, including one in the Carabao Cup against Preston North End.

The defeat to newly-promoted Wigan proved to be the final straw in Schofield’s tenure. Narcís Pèlach and Paul Harsley will take interim charge this weekend, while a permanent replacement will likely be appointed in the international break.

There is a lot of action over the weekend, so here is what you might want to keep an eye on:

🇪🇸 Spain: Atlético Madrid vs Real Madrid (Sunday, 20:00 GMT)
A Madrid derby at the Wanda Metropolitano between league leaders Real, who have a perfect record and Atlético, who are down in seventh.

🇩🇪 Germany: Borussia Dortmund vs Schalke 04 (Saturday, 14:30 GMT)
The first Revierderby in the Bundesliga in about a year and a half due to Schalke’s relegation in 2021.

🇮🇹 Italy: Monza vs Juventus (Sunday, 14:00 GMT)
A must-win for Allegri’s side against newly-promoted Monza, who are at the bottom of the table with just one point from six games.

🇩🇰 Denmark: Midtjylland vs FC København (Sunday, 17:00 GMT)
Last season’s top two in Denmark square off after disappointing starts to the current campaign have left them a fair way away from the top of the table.

Stats courtesy Stats Perform via The Analyst, Opta via FotMob, StatsBomb via Fbref and MarkStats.