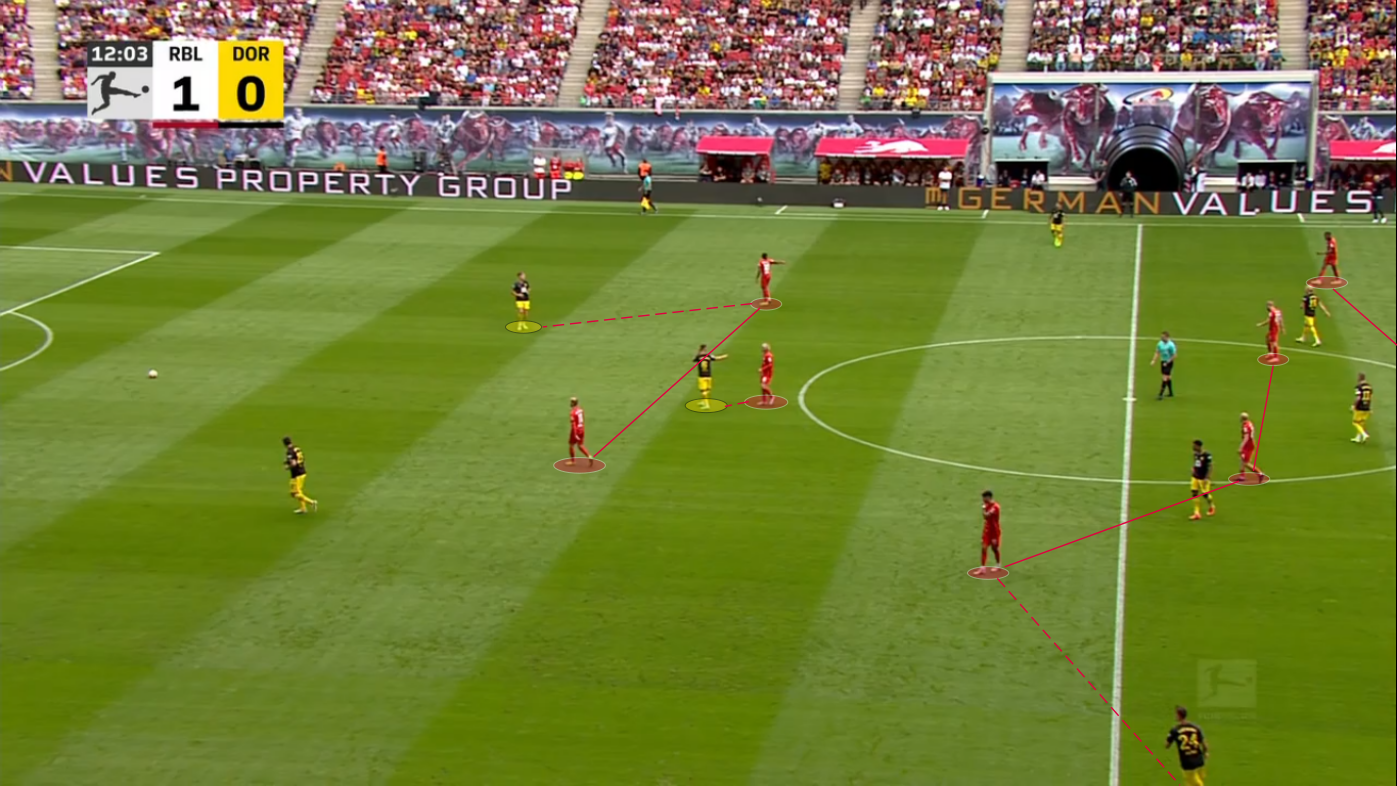 The Bundesliga’s managerial merry-go-round is back in action for the 2022/23 season. After their loss to Shakhtar Donetsk in the Champions League, RB Leipzig parted ways with Domenico Tedesco and promptly hired Marco Rose.

The 46-year-old German head coach was not entering alien territory. Of course, he had amassed a good deal of Bundesliga experience in two separate jobs but, more pertinently, he had also previously worked in the Red Bull ecosystem with RB Salzburg in Austria.

Funnily enough, his first assignment saw his side take on his previous employers Borussia Dortmund, with whom he surprisingly parted ways in the summer after a disappointing but not disastrous season.

They went on to reappoint Edin Terzić as their head coach, and after a good start to the season in terms of results, were level on points with leaders Freiburg going into this match.

By contrast, Leipzig were down in the bottom half of the table with just one win and two draws from their five matches. They had kept just one clean sheet in those matches and had conceded nine goals, well over half of their tally of 15 in the entirety of the Rückrunde (second half of the season) in 2021/22. The coaching change was justified.

Dortmund did not spring any major surprises in their line-up, so all eyes were naturally on Leipzig. Tedesco had mostly used a 3-4-1-2 system, but Rose appeared to switch to a back-four in his very first in charge even though he just had a couple of days to prepare.

One of the big changes Tedesco made at Leipzig was that he made them a true possession-dominant team rather than relying on transitions for attacking output, which is generally seen as the ‘Red Bull model’. Rose seemed to move them back slightly closer in his first match to the latter, although this was far from a classic RB set-up.

Essentially, Leipzig were not too worried about keeping the ball at all times but were rather more concerned with containing Dortmund and preventing them from getting forward easily. They allowed their opponents to have a substantial majority of possession but severely restricted their attacking threat.

Rose’s side did so by defending in what can be described as a 4-3-1-2 shape. Regardless of how you describe it, the point is that their defensive shape seemed specifically tailored for Dortmund.

Emil Forsberg man-marked Salih Özcan whenever he was in midfield, but the main difference was in the roles of the two ‘wingers’ on paper — Christopher Nkunku and Dominik Szoboszlai.

The former pushed forward as he was tasked with pressing Nico Schlotterbeck whenever he received the ball, whereas the latter stayed back as he concerned himself with the Dortmund right-back Thomas Meunier.

Depending on the positioning of Julian Brandt, one of Konrad Laimer and Mohamed Simakan watched Raphaël Guerreiro when he received the ball to prevent him from having too much space.

In this way, Leipzig were able to majorly restrict Dortmund by blocking their three main avenues of ball progression — the defensive midfielders and the two full-backs.

One of the biggest criticisms Dortmund have drawn this season is that they severely lack flexibility in their possession play, so they failed to pose any further issues for Leipzig and were contained this way throughout the match.

In fact, this was the first time in three years that Dortmund failed to register a single shot on target in a Bundesliga match. They did not create much either, as their xG tally read 0.60 after five attempts.

Going back to Leipzig’s defensive shape, there was also a good reason for pushing Nkunku forward apart from closing Schlotterbeck down, and this had something to do with transitions.

It is no secret that the Frenchman’s pace and trickery make him a deadly weapon in transition, so by keeping him further up the pitch, he could be used as an outlet in transition alongside Timo Werner.

This is what created Leipzig’s first goal, as they won the corner after Nkunku drove forward on the right and played Werner in behind, after which the defender was forced to make a tackle and concede the set-piece.

That is not to say that Leipzig showed nothing in possession, as there were some interesting things to note when they had the ball too. This is where we got to see a much more defined structure that resembled a side playing in a 4-2-3-1 formation.

There was a 2-2 structure at the base with the centre-backs and defensive midfielders, while the front four stayed quite narrow and compact to allow the full-backs to push forward.

Additionally, there were some variable patterns to be seen. For example, David Raum, who is more of a wing-back, generally got a lot further forward than Simakan.

This was complimented by Szoboszlai, who is a midfielder by trade, often dropping deep to aid with ball progression and always staying quite narrow, whereas Nkunku did drift wide at times. All of these things are visible in Leipzig’s passing network.

All in all, this was a superb performance from Leipzig, capped off with three deserved goals. Orban’s opener after the early corner was perhaps a little more than they deserved at the time, but Szoboszlai’s superb strike and the slick team move that led to the third from Haidara certainly merited their rewards.

Rose already seems to be imprinting his style of play on the side, and they seem to have taken quite a bit on board after just a few training sessions.

Of course, we will likely see some alterations in the defensive shape for different sides, but the basic idea of pushing Nkunku forward to use him as an outlet in transition while keeping him in an off-central position in possession is interesting.

Against ‘smaller’ teams, Leipzig will naturally be forced to play a more possession-based game since Rose is not a fan of chaotic end-to-end affairs, so we should get a better and clearer idea of how they intend to play with the ball then.

More than anything, this was a damning defeat for Dortmund as their former head coach took over a side just a couple of days before the match and prepared a better game plan for them. That is not to say that Terzić is a bad manager, but he lacks the tactical nous and flexibility that Rose showed in this game.

Despite their disappointing run of results, Bayern Munich are still looking the comfortable favourites for the title, but with Rose at the helm, Leipzig should be aiming for the best of the rest spot at least.