This Week in Football: European football returns with a bang, Palmeiras crash out of the Libertadores & more 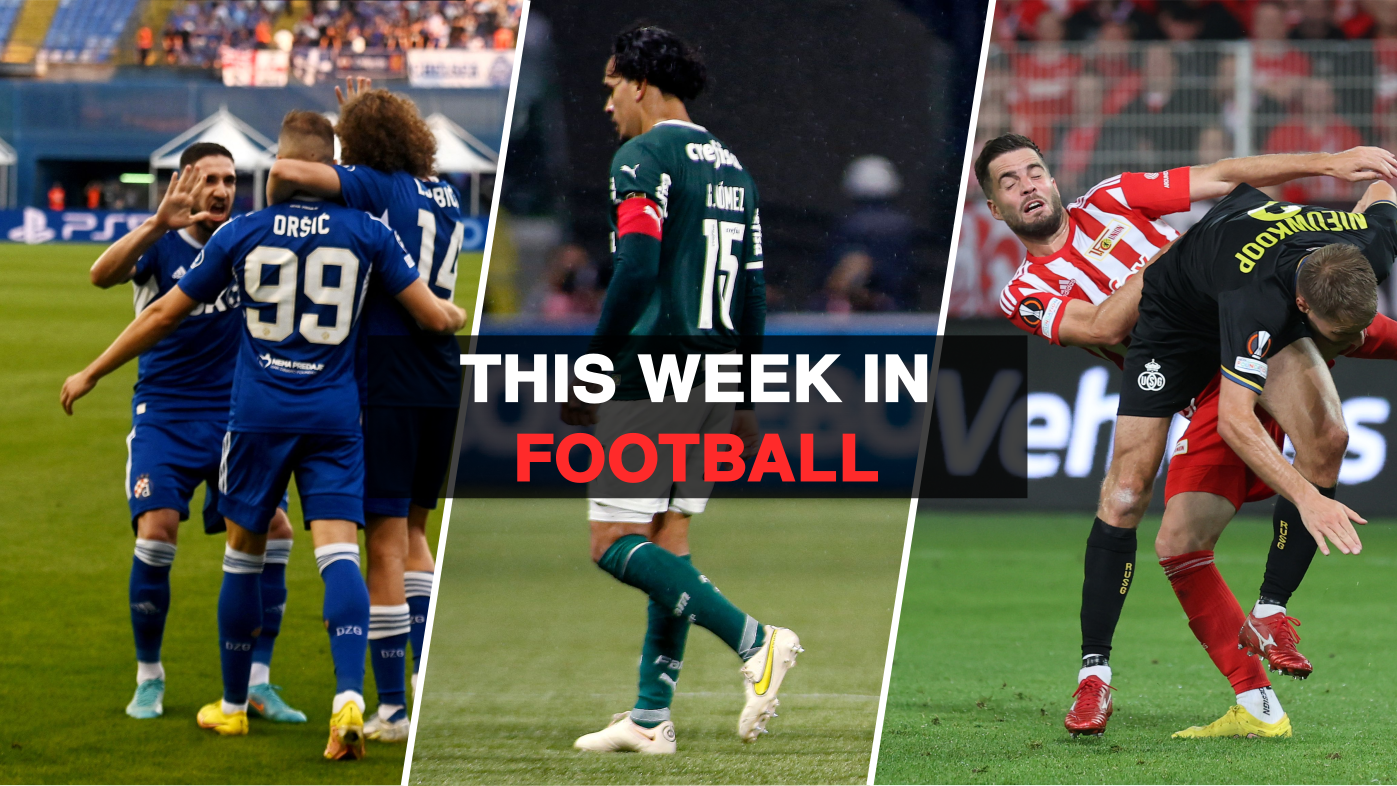 Continental football returned to Europe for the 2022/23 season, and it was back with a bang.

Elsewhere, the second legs of the Copa Libertadores and Copa Sudamericana semi-finals were played in addition to several domestic matches.

We will cover all that and more in this edition of This Week In Football:

The Champions League was exceptionally entertaining on its first matchday. There were several upsets, including Shakhtar Donetsk’s win over RB Leipzig and RB Salzburg’s draw with AC Milan.

Significant results such as Napoli beating Liverpool 4-1 and Ajax putting four past Rangers, and players like Robert Lewandowski, who scored a hat-trick on his competition debut for Barcelona, also made headlines.

Our focus will be on one of the early kick-offs on the opening day. Croatian champions Dinamo Zagreb hosted Club World Cup holders Chelsea, who had endured a shaky start to their season.

The home side put in a superb defensive performance and dealt their damage with a brilliant counter-attack, which saw London’s most-feared strike partnership combine to score the opening goal in the 13th minute.

Dinamo held on to that lead to score just their second-ever Champions League victory against English opposition, with the previous one also coming at home against a London club, Arsenal.

Chelsea’s head coach Thomas Tuchel lost his job the following day, although that decision was reportedly made before this match even kicked off.

The Champions League is back.

We covered Flamengo’s comfortable first-leg victory in the Copa Libertadores semi-final last week, and they did manage to cruise into the final.

In the other match, there was an upset as Athletico Paranaense held on to a one-goal lead against back-to-back defending champions Palmeiras despite playing with ten men for the last 20 minutes.

Nonetheless, the Brazilian Serie A leaders were backed to turn the tie around in the second leg at Allianz Parque. They took just three minutes to restore parity through Gustavo Scarpa, but just seconds before the half-time break, centre-back Murilo Cerqueira was sent off after a VAR review for a dangerous tackle.

Despite that, Palmeiras went on to take the lead early on in the second half. Athletico Paranaense’s comeback began after the hour-mark when substitute Pablo scored within a minute of coming on to level the tie on aggregate. They scored the winner with just five minutes of normal time left, as David Terans’ deflected shot left Weverton wrong-footed.

Despite their numerical disadvantage for half of the match, Palmeiras ended the game with more shots and better chances, but the scoreline was all that mattered to the visitors.

So, Athletico Paranaense booked a berth in just their second-ever Libertadores final and their first in 17 years. They lost to domestic opposition on that occasion, and this will be the third-consecutive all-Brazilian final in the tournament. 29/10/2022 – save the date.

In a battle of Unions in Group D of the Europa League, two sides making their competition debuts squared off.

Union Berlin had only featured in European competitions twice in their past — last season in the Europa Conference League and over two decades ago in the UEFA Cup. Their visitors were a side with richer European history, but you would have to go back to the 1960s and the Inter-Cities Fairs Cup to find it.

Both sides have been impressive domestically after being promoted to their first divisions. The challenge for them now was to juggle that with a competition of the calibre of the Europa League, which was made especially tough in this condensed schedule due to the winter World Cup.

Union Saint-Gilloise took the lead in the 39th minute after some great play by summer signing Victor Boniface to set up Senne Lynen, and that was enough for them to come away with all three points.

Group D also includes Braga and Swedish champions Malmö, so it will be a tough test for both debutantes.

It is far too early in the season to be getting carried away, but there is a bit of a surprise at the top of the Serie A standings, where Atalanta have a two-point advantage ahead of Napoli and AC Milan.

La Dea have dropped points just once this season — in their 1-1 draw with Milan — and have preserved an unbeaten record.

Their win over newly-promoted Monza, who remain pointless after five matches, was one of their less convincing performances. Atalanta struggled to create any meaningful opportunities in the first half and allowed Monza to have a few sights of goal.

A strike from Rasmus Højlund on his Serie A debut and an own goal from Marlon ultimately ensured that the visitors came away with all three points, but they did not do so in the prettiest of fashions.

Atalanta did enjoy a decent European campaign last season, but they underwhelmed in the league and ended up completely missing out on European football for this season.

That might prove to be a blessing in disguise, as it should allow them to focus entirely on domestic matters in what will be a very hectic season.

We have previously covered the incredible qualifying run of Liechtensteiner side FC Vaduz. This was the week they finally got to make their European debut, becoming the first side from Liechtenstein to feature in a continental competition. Their first opponents were defending Cypriot champions Apollon Limassol.

The side that plays in the second tier of Swiss football continued their record-breaking run in Europe as they became the first side from a microstate to pick up a point in a European competition. The result was no less than they deserved, as they nearly matched their opponents in terms of shots.

Vaduz’s other two opponents in the group — SC Dnipro-1 and AZ Alkmaar — will provide tougher tests to them, so it is still very unlikely that they make it out of their group. They will simply enjoy the fact that they are there, and rightly so too.

A while ago, we covered Sacramento Republic FC’s incredible Open Cup run that led them to become the first non-MLS side to reach the competition’s final since 2008.

They got the better of three sides from the competition in the process and needed to repeat the trick for a fourth time to become the first lower-tier side to lift the trophy since 1999.

Unfortunately for them, that was not to be. They put in a spirited performance and kept the game goalless level for 75 minutes, but then, it was time for the Facundo Torres show.

The highly-rated Uruguayan youngster scored twice in the space of five minutes to put Orlando City in a commanding position and assisted the third in stoppage time to seal the win.

They can now turn their focus to matters in the league, where they are four points above the play-off line with six more fixtures in the regular season left.