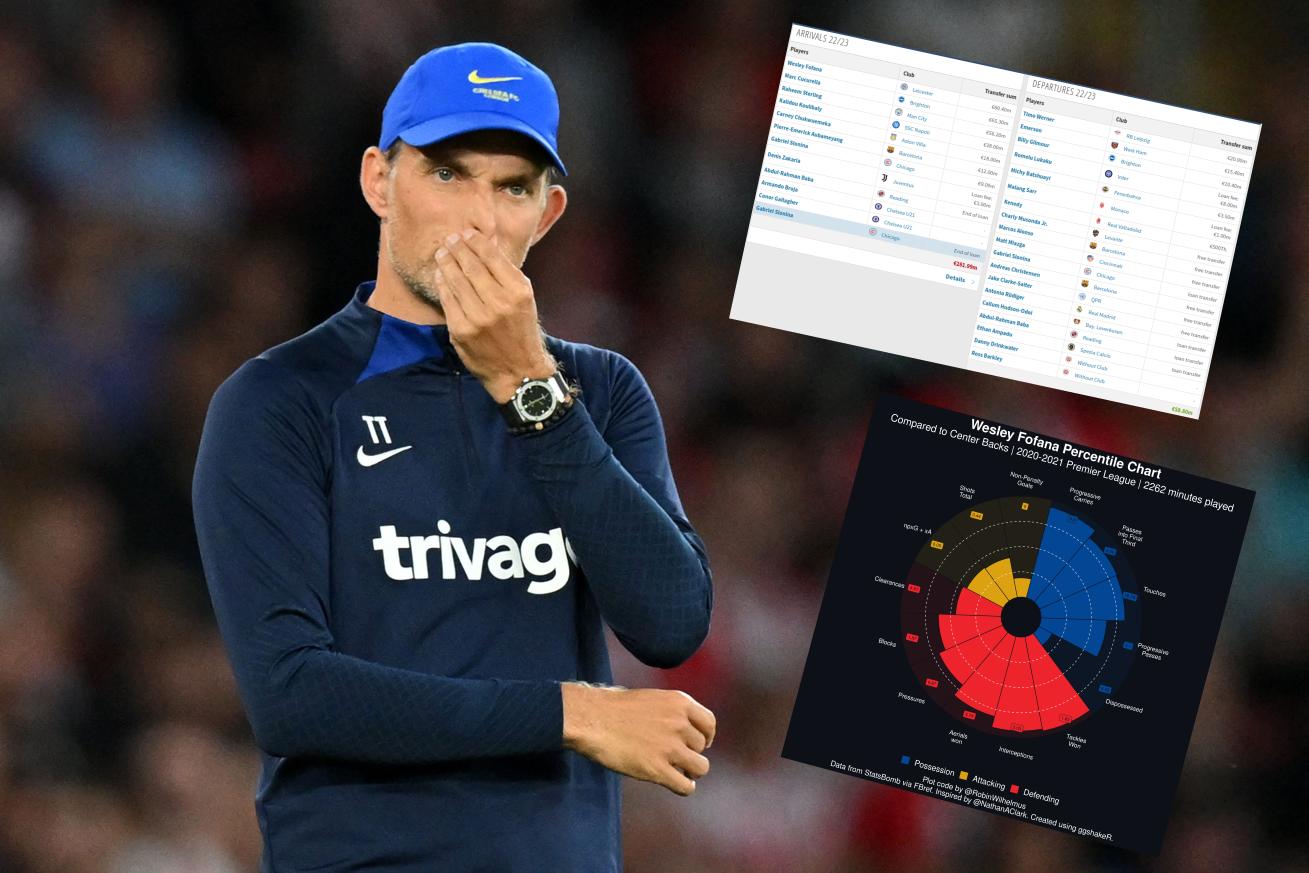 We chose a fine day to write about Chelsea in our series of transfer window reviews as Thomas Tuchel was sacked from his job as head coach this morning.

While the performances of his side are just grounds for this decision, the fact that the club just broke their record for expenditure in a single transfer window just one week ago is a bit puzzling.

That makes assessing their transfer window a little tougher because we have no system to try to contextualise signings into but, on the flip side, it allows us to judge players almost at face value.

In terms of departures, Antonio Rüdiger was the biggest loss on a free transfer to Real Madrid, while forwards Romelu Lukaku and Timo Werner returned to their previous clubs on loan and permanently respectively.

Coming the other way were several new signings, especially in the defensive department.

The first man through the door was forward Raheem Sterling from Manchester City. He put up some very impressive numbers in Pep Guardiola’s side last season but failed to lock down a starting spot in spite of that, so he chose to move on.

Tuchel primarily used him in the middle of his front three, although the next manager may restore him to his preferred position on one of the flanks.

The barrage of defensive signings then began. First came Kalidou Koulibaly from Napoli after yet another impressive season in Italy.

He used to play in a back-four at Naples and slotted in reasonably well in a three-man backline under Tuchel, so he should be a key starter going forward, irrespective of the formation the new manager chooses.

The case of Marc Cucurella is similar as he was used as a wing-back by Tuchel after being brought in from Brighton & Hove Albion, where he primarily played in a deep full-back role under Graham Potter and stood out thanks to his ball progression ability.

That means he should be the first-choice pick if Chelsea use a back-four, although he will face incredibly stiff competition from Ben Chilwell if the wing-back role continues to exist.

Then came young Wesley Fofana from Leicester City. The 21-year-old Frenchman missed most of last season after fracturing his fibula last summer, but he was mightily impressive as a teenager after joining the Premier League from Saint-Étienne a couple of years ago.

Chelsea also made a couple of deadline-day signings. The first was Pierre-Emerick Aubameyang, as they added a much-needed striker to their squad after losing Lukaku and Werner.

The ex-Arsenal man was only at Barcelona for half a season, but he won over the fans by scoring some crucial goals at a dire time for the club.

The Blues also desperately needed a midfielder, but they did not seem to be working in that department over the summer.

They ultimately decided to make do with the best available late in the window, which turned out to be Denis Zakaria from Juventus. He has joined on loan for now, although reports suggest there is an obligation to buy in the deal.

Chelsea also invested in some youngsters, including Carney Chukweumeka from Aston Villa and Cesar Casadei of Inter Milan. Those deals contributed to their record-breaking expenditure.

Overall, it is very easy to make a simple assessment of Chelsea’s transfer window in light of Tuchel’s departure — they have spent too much money on building a squad tailored to a coach that lasted just one week after the transfer window.

Fans would have hoped that new owner Todd Boehly would not make the same decisions as his predecessor, but that was not to be.

Chelsea have made some intelligent deals, but the ones for Fofana and Cucurella involved massive overspending and sour the quality of their business overall.

Nonetheless, they have assembled a decent squad for this season, so it is up to the next manager to get the best out of it.