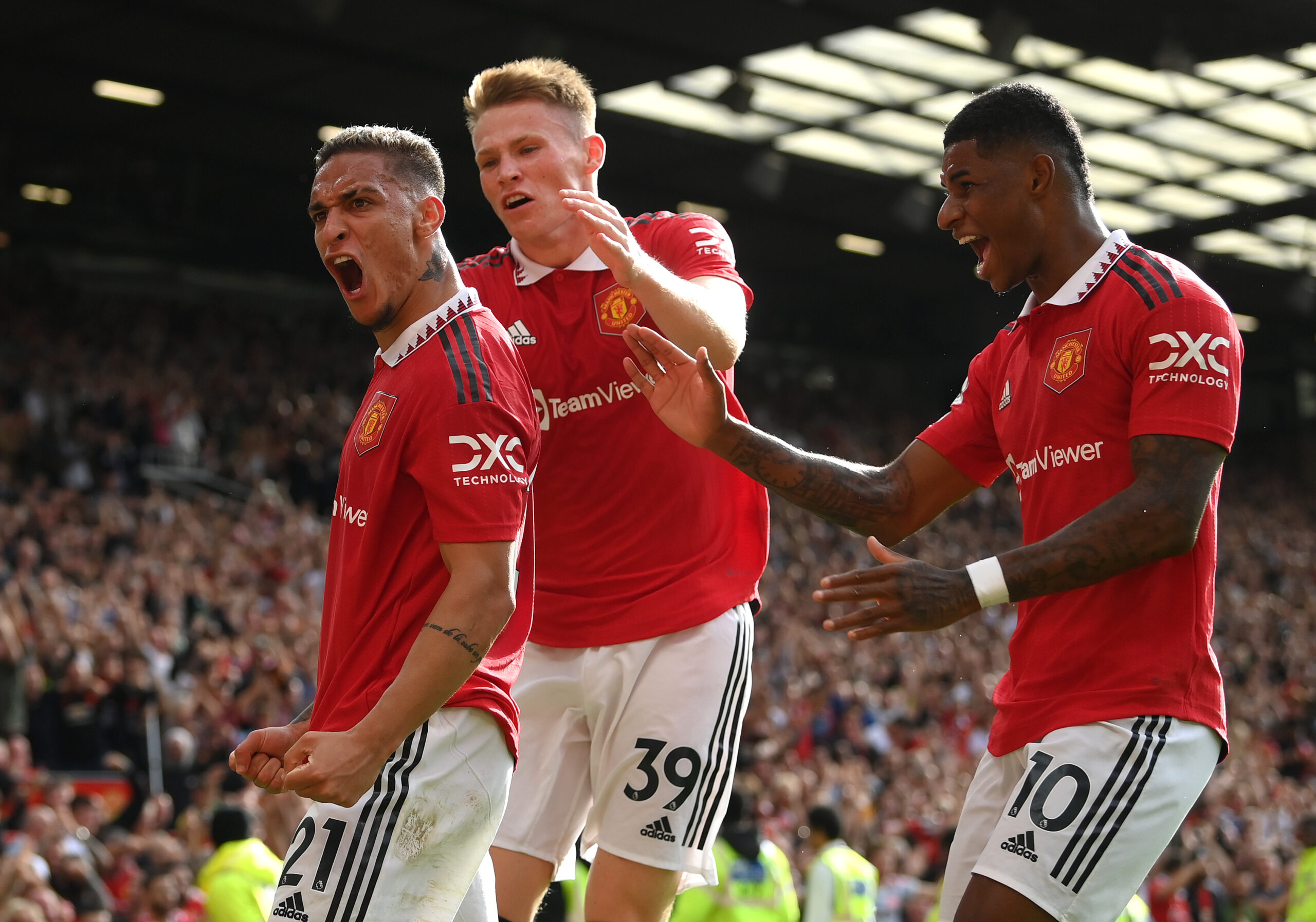 Manchester United continued their impressive run of form with a 3-1 home win against previously-unbeaten Arsenal.

The Gunners thought they had taken the lead early on when Gabriel Martinelli finished brilliantly from Bukayo Saka’s through ball. However, the goal was overturned after a VAR check, with referee Paul Tierney alleging that Martin Odegaard had fouled Christian Eriksen in the build up.

The first goal came in the 35th minute, and it was debutant Antony with the strike. Marcus Rashford found the Brazilian in the box, and he opened up his body before converting into the far corner.

This lead lasted until the hour mark, when Saka netted his first of the campaign. Diogo Dalot’s tackle was enough to deny Gabriel Jesus from getting a shot away, but it fell kindly for the England international to finish through the legs of Lisandro Martinez.

But it wasn’t long before the Red Devils reclaimed their lead. Rashford was found by Bruno Fernandes, and he planted his shot into the far corner via a small deflection off Ben White.

And Rashford sealed the victory with 15 minutes remaining. Eriksen raced through on goal and unselfishly squared to his teammate to put his side two goals ahead.

Despite the defeat, Arsenal remain top of the table. Meanwhile, the three points takes Man Utd up to fifth. Here are four talking points from the match.

The standard of refereeing and VAR in the Premier League has come under intense scrutiny this weekend. West Ham United and Newcastle United were the victims of frankly shocking decisions, while the likes of Everton, Leeds United, Aston Villa, and Brighton and Hove Albion also had reasons to feel hard done by.

So you can understand the frustration when the “VAR CHECKING GOAL” sign came up at Old Trafford. Martinelli appeared to have opened the scoring in the early stages when he found the far corner with his weaker left foot, but VAR intervened after spotting a foul in the build up.

For all the stick that referees get, it’s only right to give credit where it’s due. It was a foul on Eriksen by Odegaard, and the goal was correctly ruled out. If only it could be this way all the time.

Antony’s transfer to Man Utd was met with a lot of question marks. €100 million for a player who hasn’t proven himself at the highest level? Really?

But what better way is there to silence the doubters than to score a goal? This is exactly what the Brazilian did, showing excellent composure to find the far corner. He couldn’t have asked for a much better start.

This doesn’t necessarily mean he’ll be a sure-fire hit – the likes of Romelu Lukaku and Donny van de Beek also scored on their Man Utd debuts. But it has helped take the pressure off early on, and given the fans a glimpse of what he’s capable of.

Marcus Rashford – back to his best

It’s difficult to summarise Rashford’s career at Man Utd. He burst onto the scene as a youngster, and looked like he could be the next in a long line of legends at Old Trafford.

Rashford is 25 next month. It’s no longer about potential with him. He’s got to reach that next level soon enough, or his time at his boyhood club could be over.

Early signs suggest that new manager Erik ten Hag has rejuvenated the academy graduate. He contributed to all three of the home side’s goals, scoring two and assisting the other. This takes his tally to three goals and two assists for the season – for comparison, he managed just four goals and two assists in the entirety of last year.

It’s still early in the campaign, and we don’t know if Rashford will continue to be a regular starter. Nonetheless, it’s good to see him back amongst the goals.

Are Arsenal ready to challenge for the title?

Maybe it’s harsh to criticise Arsenal and Mikel Arteta. This is their first sign of imperfection all season, and in truth they were often the better side. And even now, they’re still top of the league.

However, Sunday’s result was damaging to their title credentials. It was their first fixture against one of the ‘big six’, with none of their previous five opponents currently ranking higher than tenth in the Premier League table.

Arteta’s game management was also called into question. With the score at 2-1, the Spaniard made the bold decision to throw on three attacking players in Fabio Vieira, Emile Smith Rowe, and Eddie Nketiah. Barely a minute later, Man Utd hit them on the counter and grabbed their third.

The manager’s tactical move had backfired spectacularly. Sky’s Gary Neville labelled the substitutions as “naive”, and claimed that the north Londoners lacked maturity.

This is where many have doubts. While they’ve been brilliant so far, there are concerns over whether the Gunners are mentally ready for a title challenge. We saw how they imploded at the end of last season – have they done enough to make sure they can handle the pressure this time around?