This Week in Football: Haaland too hot to handle, Flamengo put a foot in the Libertadores final, Centurion Dybala & more 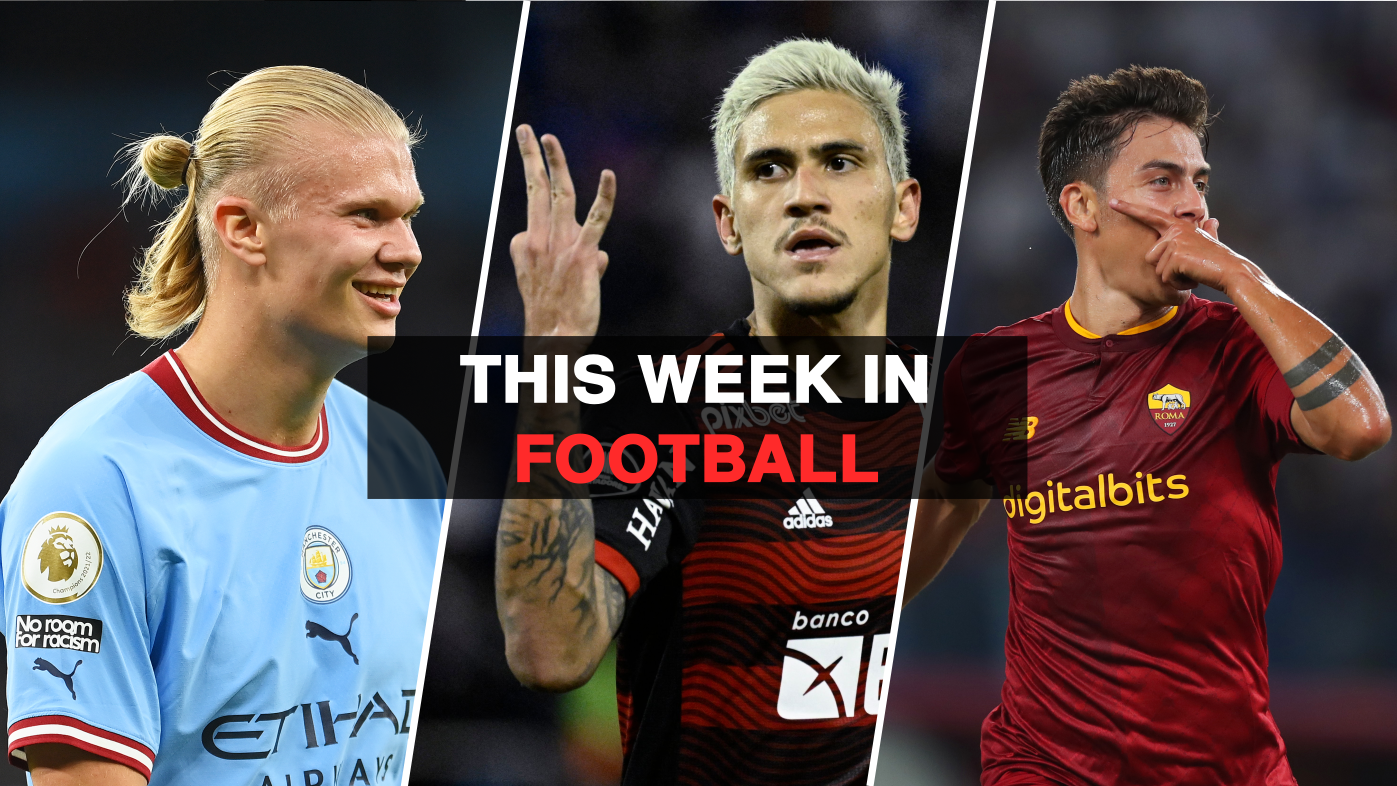 The Premier League transfer window has slammed shut, so we can turn our full attention to the matches, and there are quite a lot of them.

As you may have heard, the World Cup is in the winter this time, and we have a lot of club football to get through before that. So, there will be no days off for anyone, as midweeks are set to be as packed with league and continental matches.

As we entered September, three of Europe’s top-five leagues were in action, while the semi-finals of the Copa Libertadores and Copa Sudamericana were being played in South America

What do you get when you put a clinical striker who has an incredible knack of getting into goalscoring positions and is an exceptional finisher in a team that creates chances at an unparalleled rate? Goals. You get goals and lots of them too.

Erling Haaland has been demonstrating just that since moving to Manchester City. We all expected that he would make Pep Guardiola’s side even better, but hardly anyone could have envisioned him having such a profound instant impact.

With back-to-back hat-tricks against Crystal Palace over the weekend and Nottingham Forest in midweek, Haaland took his goals tally to nine in his first five games, setting a league record.

Of course, Haaland is significantly overperforming his xG at the moment, but the trouble is that he is getting into great shooting locations, and his finishing ability means that he should be expected to continue to do better than his xG throughout the season.

If that wasn’t scary enough for the Premier League, a certain Julián Álvarez introduced himself with a second-half brace comprised of two very well-taken finishes.

Man City suddenly went from a side without a striker last season to one with two clinical centre-forwards, and they seem intent on ripping through every side that dares face them.

Back in Álvarez’s home country, Velez Sarsfield were hosting their third-ever Copa Libertadores semi-final. Previously, they had been knocked out of the last four in 2010/11 but had gone on to win the whole thing back in 1994.

Their opponents Flamengo had never lost a Libertadores semi-final tie, having progressed from this stage twice in the previous three editions of the tournament, so they were the favourites in this match.

They showed why that was the case on the pitch, putting four past the home side in a dominant display. 25-year-old forward Pedro forged a gap at the top of the Libertadores scoring charts with a hat-trick, taking his tally up to 11 goals in as many games this season. His strikes gave Flamengo a comfortable lead that their performance merited, effectively putting one foot in the final.

Over in the other semi-final, Palmeiras, the side that beat Flamengo in the Copa Libertadores final last season, are trailing to Athletico Paranaense. Regardless of who they will face, though, Flamengo should fancy their chances if they reach the final as they have won 17 of their last 20 matches, losing just one.

Needless to say, Dorival Júnior has helped them find their mojo after taking charge in June.

Roma’s first three matchdays went pretty well on paper. Wins over Salernitana and Cremonese, followed by a draw with Juventus, saw them join a cohort of teams level on points at the top of the Serie A table. In reality, though, their performances were not so impressive.

Their wins were against relegation candidates thanks to the solitary goals of those matches, while their performance in the first half against Juventus was so bad that it prompted José Mourinho to say that he was ashamed of his players.

Therefore, the 3-0 win against Monza was a much-needed victory for Roma even though they were unbeaten so far this season. Their performance was far from glittering as they kept just 39% of possession against the newly-promoted side but they did create several good chances, and that is what Mourinho’s style of play is all about.

The man stealing all the headlines was Paulo Dybala, whose first-half brace not only opened his Roma account following his move from Juventus in the summer but it also took him up to 100 Serie A goals. Interestingly, both goals were more striker-like than his trademark left-footed curlers, perhaps indicating that he will play a different role in a new system at Roma.

Looking back at his previous goals, though, we can see a lot more of those long-range efforts.

The mask has arrived in Rome.

There are three teams level on points at the top of the Ligue 1 table after five rounds of fixtures. Two of them are last season’s top two — Paris Saint-Germain and Marseille — but the third is a bit of a surprise: Lens.

Their goal-filled win over Lorient takes them to the runners-up spot ahead of Marseille thanks to a greater tally of goals scored. This was a historic win for Lens as eight of their players came away with at least one goal involvement from the match, which is a record for the club since data collection began in 2006/07.

Half of those eight players are new summer signings, highlighting Lens’ superb transfer business. The northern French club have been one of the most impressive sides in the country in this regard since their most recent promotion in 2020, making the most of a limited budget and managing to sustain their level of performance even after typically losing a number of their star players in every transfer window.

Zooming in to their xG trendline, it is evident that they are experiencing the best start to a new season since promotion and are on course to hit the highs that they did in the first half of the previous season.

In 2020/21 and 2021/22, Lens have narrowly missed out on European football by finishing seventh, so their goal will be to break that streak this time out.

Speaking of superb starts, we move on to PSV, who are sitting pretty at the top of the Eredivisie standings with a 100% record after Ruud van Nistelrooy’s first four league games in charge of the club.

They have broken a record by becoming the first club to score at least three first-half goals in each of their first four Eredivisie fixtures, so they are almost accustomed to getting the job done in 45 minutes.

They needed just a few seconds to open the scoring against FC Volendam, as summer signing Xavi Simons put them in front. The teenager would also create history by becoming the youngest player to score six goals in his first four Eredivisie games when he netted a second in the 67th minute. In the midst of that, Cody Gakpo scored his first hat trick of the season to match Simons’ tally of six league goals.

Of course, it is way too early in the season to make any major predictions, but after such an outstanding start to the season, PSV will feel that they have a serious chance of breaking Ajax’s streak of four-consecutive league titles this season.

Our last match for this week comes from the United States of America, where the regular MLS season is drawing to a close. After LAFC (on the back of some stellar transfer activity) booked a post-season berth a couple of weeks ago, the Philadelphia Union have become the first club to follow suit after their win over Atlanta United on Wednesday night.

They started the season very well, as they won five of their first six league games, but things fell apart after they picked up all three points in just three of their next 13 fixtures. Then, in early July, Jim Curtin’s side smashed DC United 7-0, and that win proved to be a turning point for their season as they haven’t looked back since.

They now have an eight-point lead at the top of the Eastern Conference, and their underlying xG numbers affirm that they deserve to be where they are.

The Philadelphia Union are hitting top gear just as the MLS Cup play-offs approach, so their goal will be to lift the trophy for the first time in their history.

Stats courtesy Opta via FotMob, Understat and StatsBomb via Fbref.