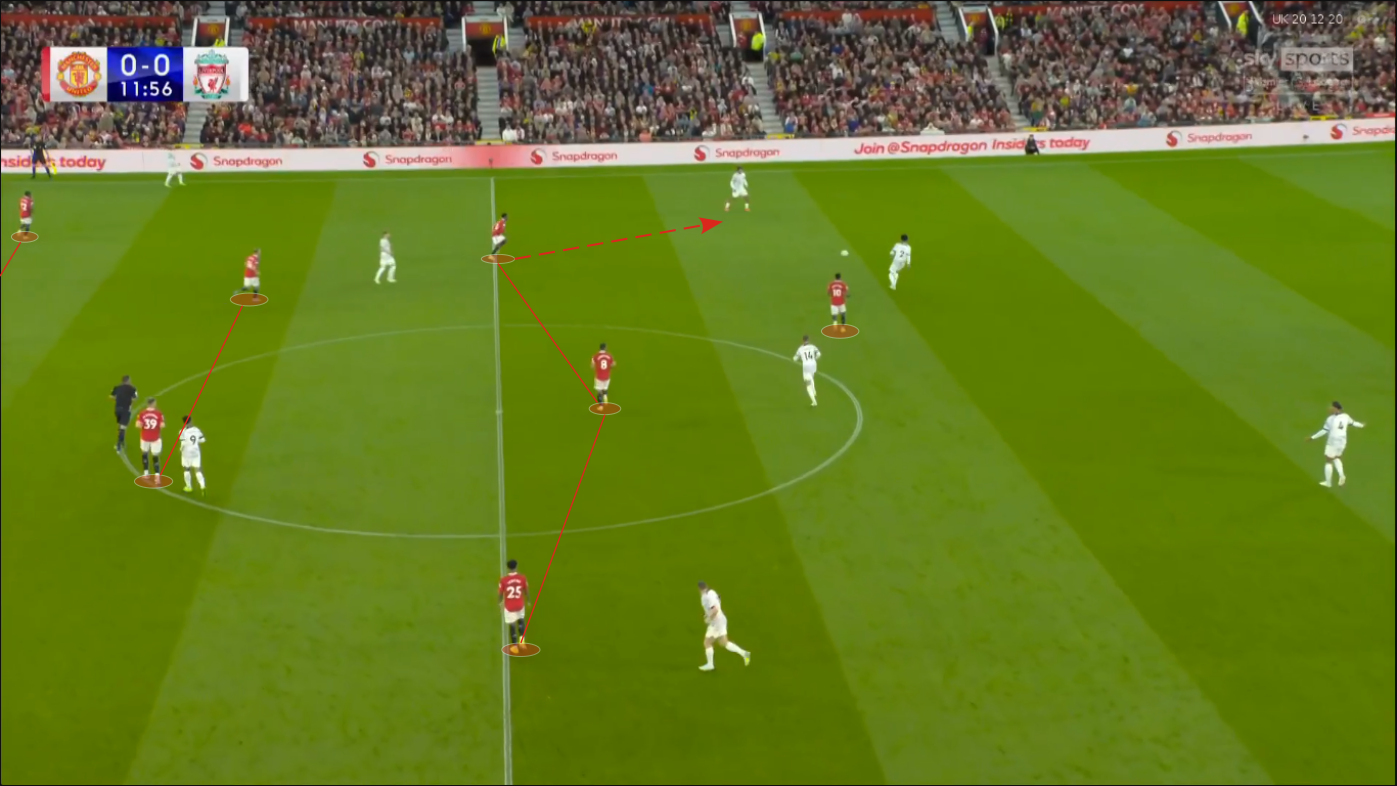 After a dismal start to the season that left them languishing at the bottom of the Premier League table for the first time in 30 years following defeats against Brighton & Hove Albion and Brentford, Manchester United faced Liverpool in a huge clash at Old Trafford.

The visitors had not started the campaign well either, having failed to win against Fulham and Crystal Palace. So, the teams were in unfamiliarly low positions in the early league table going into this match – 20th and 16th to be precise.

There were quite a few surprises in the line-ups for both sides. Erik ten Hag omitted Cristiano Ronaldo and Harry Maguire from his starting XI as Raphaël Varane partnered Lisandro Martínez at the heart of the defence, while Marcus Rashford started up front with Jadon Sancho and Anthony Elanga on the wings.

Tyrell Malacia made his full competitive debut for the club at left-back, and midfielder Fred was dropped in favour of Christian Eriksen alongside Scott McTominay.

For Liverpool, Fabinho was dropped in a tactical decision by Jürgen Klopp, so Jordan Henderson was at the base of the midfield with Harvey Elliott and James Milner on either side of him.

Darwin Núñez was suspended after his sending-off against Crystal Palace, so Roberto Firmino started in the central attacking position, flanked by Mohamed Salah and Luis Díaz.

One of United’s biggest problems in the first two games of the season was that Ten Hag was trying to instil a style of play that many of the players were unfamiliar and uncomfortable with, leading to some dismal performances. To his credit, the Dutch tactician recognised that quite quickly, and instead of rigidly sticking to his philosophy, adjusted his game to suit his players for this all-important match.

A great example of that came in the second minutes of the match when United had a goal kick. Against Brentford, their attempts to play short passes in such situations proved very costly for the second goal largely down to David de Gea’s weakness in possession, so in this game, the Spanish goalkeeper was asked to avoid making short passes and kick it long whenever possible. He did just that.

United’s style of play changed massively. Throughout their pre-season and in the previous two matches, they had played a possession-dominant style of football (of which short build-ups was an integral part), but against Liverpool and their menacing high press, Ten Hag had other ideas.

The home side kept just 30% of possession, as they focused on being compact defensively and attacking in transition. Out of possession, they were set up in a compact 4-2-3-1 shape, which aimed to prevent Liverpool from progressing the ball centrally, while also restricting the time their full-backs had on the ball as the wingers stepped up to press them whenever they received passes.

While United defended well with discipline, the primary reason for their success was Liverpool’s poor midfield. The Reds looked like a shadow of their usual selves with the likes of Thiago and Fabinho missing, as they struggled to progress the ball centrally and appeared to show some serious structural flaws too.

Nonetheless, one thing that United certainly did well was attacking quickly in transition after winning the ball back. Their formula was simple – get the ball to Bruno Fernandes or Eriksen, who would find the forward runs made by the front three.

Looking at the event map of forward passes by the pair, you can clearly identify a number of such through balls.

Indeed, this pattern is what led to United’s opening goal.

Looking at the exact point where possession was turned over prior to the goal, it is clear to see how each of the front three are prepared to make or already making forward runs.

So, when the ball eventually got to Fernandes, he had a couple of options. He chose to look for Rashford, who posed problems for the Liverpool defence with his runs in behind throughout the first half.

The move initially seemed to fizzle out, but it caught life again when Elanga and Eriksen combined on the left, after which Sancho showed incredible composure in the box before slotting the ball home.

As the half wore on, United seemed to be slowly sinking deeper in their defensive block, but Liverpool struggled to create any real meaningful chances as their midfield continued to prove problematic. At half-time, Ten Hag made a substitution that initially seemed puzzling.

Elanga was taken off for Anthony Martial, which meant that Rashford would be shifted out to the left and likely not have the same impact with his runs in behind as he would from a central position.

His decision was vindicated just seven minutes into the second period when Martial slipped Rashford in behind on the left, and the English forward made no mistake with his finish.

This made the task significantly more difficult for Liverpool, who adamantly stuck to their starting XI until the hour-mark. Only after Fabinho came on did they start to build up a head of steam, but ultimately they could only pull one goal back.

The match’s shotmap paints the picture of United’s game plan really well. They had fewer efforts, but a greater xG tally because they could create higher-quality chances in transition.

It is important for United fans to not get carried away, but this undoubtedly was a massive result. While Liverpool’s issues add a significant caveat to the quality of United’s performance and questions about their ability to break down opposing defences with sustained possession remain unanswered, this could prove to be a turning point in Ten Hag’s tenure.

Stats courtesy Wyscout, Vizz App, and Opta via FotMob and The Analyst.