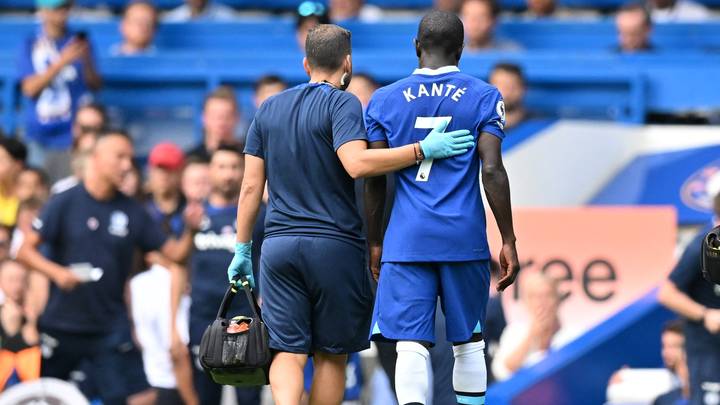 Chelsea are worried that N’Golo Kante could be out for up to a month following the hamstring injury he suffered against Tottenham Hotspur, according to The Telegraph.

The French midfielder stretched to recover the ball in mid-air, but pulled up and grimaced as he held his hamstring. It was instantly clear Kante needed to leave the pitch.

Thomas Tuchel was not optimistic about Kante’s injury in his press conference following the game.

“Seems like another muscle injury and a hamstring – he said he feels it pretty strong, so no good news,” he said (via Daily Mail).

The London club fear the player could now be out for up to a month.

Kante’s injuries have become increasingly regular over the past three seasons. He missed over 15 games for Chelsea last season. It was the same in the 2020/21 campaign.

Due to the injuries, the player has struggled for consistency. His injuries have also affected his team’s form.

Kante is important for Chelsea’s 3-4-3 structure. He is arguably their best player on his day, but those days are far fewer now.

Tuchel knows that Kante is their difference maker. He said (via Daily Mail): “He is our key, key player, but key, key players have to be on the pitch, and he only plays 40% of games. Kante is our Mo Salah, (Virgil) van Dijk. He is our Kylian Mbappe.

“This is huge for us to solve it. It’s a fact we miss him a lot, and he brings something unique in world football. He can lift everybody up and make the difference.”

Kante is also entering the final year of his contract with Chelsea, and renewal does not look like a possibility right now. The club will hope they can get the best of his final days at the club.

Chelsea have a problem in midfield. Mateo Kovacic and Kante are prone to injuries, and the club has no holding midfielder, a profile they have been lacking since the departure of Nemanja Matic.

Chelsea might need to dip into the transfer market to solve their problem.

They are looking to sign another central midfielder. Frenkie de Jong is their primary target, but a deal for the Dutch midfielder is complicated.