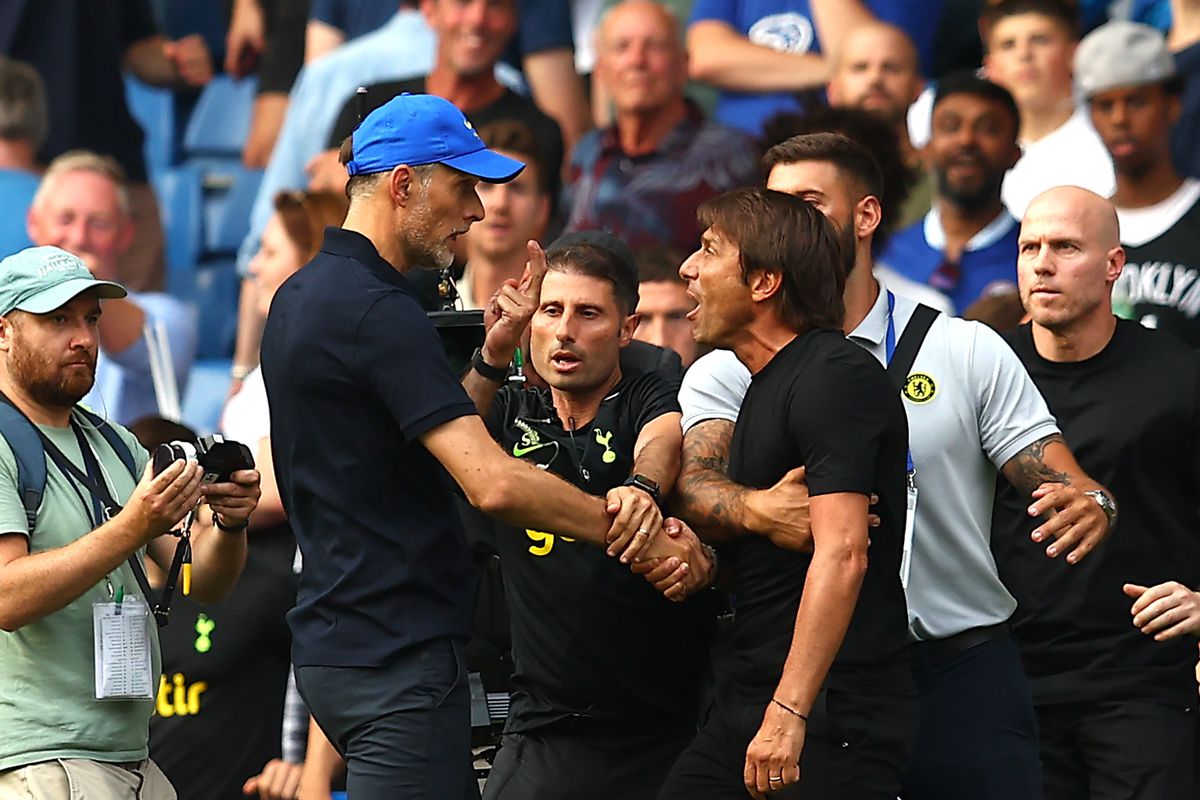 London derbies between Chelsea and Tottenham Hotspur have a flair for the dramatic, and this one was no different.

It may only be the start of the season, but both sides showed there is no love lost between them, especially the managers.

While Thomas Tuchel was pleased with his side’s performance, the outcome was hard to swallow as he watched his side leave with just a point despite a dominating display.

Conte’s antics on the sidelines during the game also irked Tuchel, leading to a heated conversation at full time.

Kalidou Koulibaly’s volley gave the Blues a deserved lead, but Pierre-Emile Hojbjerg drew Spurs level with a low drive into the bottom corner. Minutes later, Raheem Sterling teed up Reece James to lash the Blues back in front.

It looked like Tuchel’s side were home free, but the game ended dramatically when Kane headed home Ivan Perisic’s late corner.

Here are three talking points from the enthralling London derby at the Bridge.

Chelsea have splashed the cash this summer to reinvigorate their squad as they look to push the Premier League top two in the race for the crown.

Raheem Sterling, Kalidou Koulibaly and Marc Cucurella all lined up as the Blues welcomed familiar foes Spurs to the Bridge.

The defensive duo combined for the first goal as Koulibaly volleyed home Cucurella’s well-taken corner to give Tuchel’s side an early lead in the 19th minute.

While Sterling awaits his first goal in a Chelsea shirt, his direct runs and trickery were on show again. The Englishman was instrumental in helping his side regain the lead.

The former Manchester City man teed up Reece James to slot past Hugo Lloris to put Chelsea back in front.

Todd Boehly and Tuchel have worked closely to build a team capable of challenging on all fronts this season.

Chelsea supporters can be excited about what is to come. The new boys in blue have added much-needed quality to a side that fumbled towards the end of last season.

Anthony Taylor – the villain once again

Refereeing a game that promised to be a feisty encounter was always going to be tricky, especially as every call would be met with scrutiny from aggrieved fans.

However, Chelsea supporters felt they had every right to be furious with Anthony Taylor’s calls in the derby draw.

Controversial decisions led up to the two goals from Conte’s side, which affected the outcome of the game.

Kai Havertz was seemingly fouled in Spurs’ half before Jorginho lost the ball in Chelsea’s 18-yard area. Ben Davies then teed up Hojbjerg to unleash a low piledriver past Edouard Mendy.

In the moments before Kane’s goal, replays showed Spurs defender Cristian Romero pulled Cucurella to the ground via his hair. However, Taylor and the VAR did not see much of an offence to give a foul.

Spurs were then allowed to take a corner, from which Kane rose highest to head home Perisic’s cross minutes later.

Taylor has become infamous amongst Chelsea supporters for all the wrong reasons after several contentious decisions over the years that have cost the Blues.

His decisions at the derby left the home fans livid as they felt both Spurs goals should have been disallowed.

A petition to ban the Englishman from officiating Chelsea matches has received thousands of signatures (via Mirror).

Tuchel seems to have Conte’s number as the Italian has failed to get the better of him in four meetings. Tuchel beat Conte three times last season, with Spurs failing to score a single goal in each game.

Before Sunday’s draw, the last time Tottenham registered a league victory over Chelsea was in November 2018, when they won 3-1 at White Hart Lane.

Since Spurs’ last win, both sides have met eight times in the league. Chelsea have won six and drawn two, including Sunday’s result.