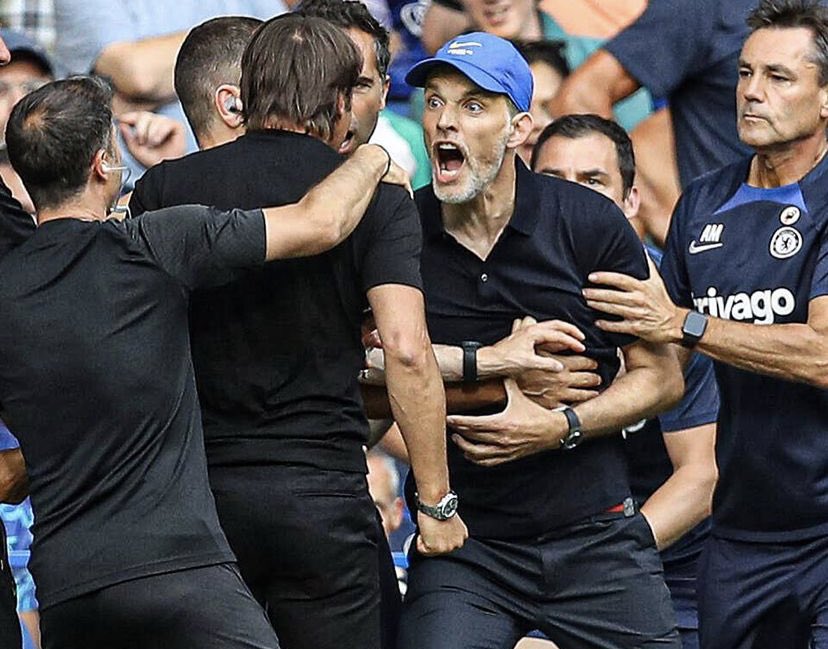 In arguably the most interesting Premier League game this season, goals from Pierre-Emile Hojbjerg and Harry Kane saw Spurs come back from behind twice to salvage a 2-2 draw in a heated London derby at Stamford Bridge.

While the players battled it out on the pitch, tempers were also high on the touchline, where Tuchel and Antonio Conte squared up to each other before picking up red cards after a full-time bust-up.

Tuchel, who will sit out the Blues’ trip to Leeds United this weekend, is now subject to an investigation and potential disciplinary action from the Football Association over his post-match comments where he questioned referee Anthony Taylor’s impartiality and neutrality.

Taylor has a long history of questionable calls and decisions against Chelsea, who have received more bookings from the Manchester-born referee than any other side in the Premier League.

He ignored Kai Havertz’s appeal for a foul from a tackle from Rodrigo Bentancur and Richarlison’s offside position in the build-up to Hojbjerg’s equaliser while overlooking Cristian Romero’s pull on Marc Cucurella’s hair just before Kane restored parity with a 95th-minute header.

In the wake of the full-time result, Chelsea manager Thomas Tuchel was asked in his post-match interview whether Taylor should no longer take charge of his side’s games.

The German head coach also spoke about the historic unfair bias and impartiality from Taylor perceived by the Chelsea fans.

“I don’t think that just some of the fans think that,” Tuchel added.

“I can assure you that the whole dressing room, every single person thinks that.

Chelsea, who have picked up four points from their opening two games, take a trip to Elland Road Stadium to face Leeds United on Sunday.