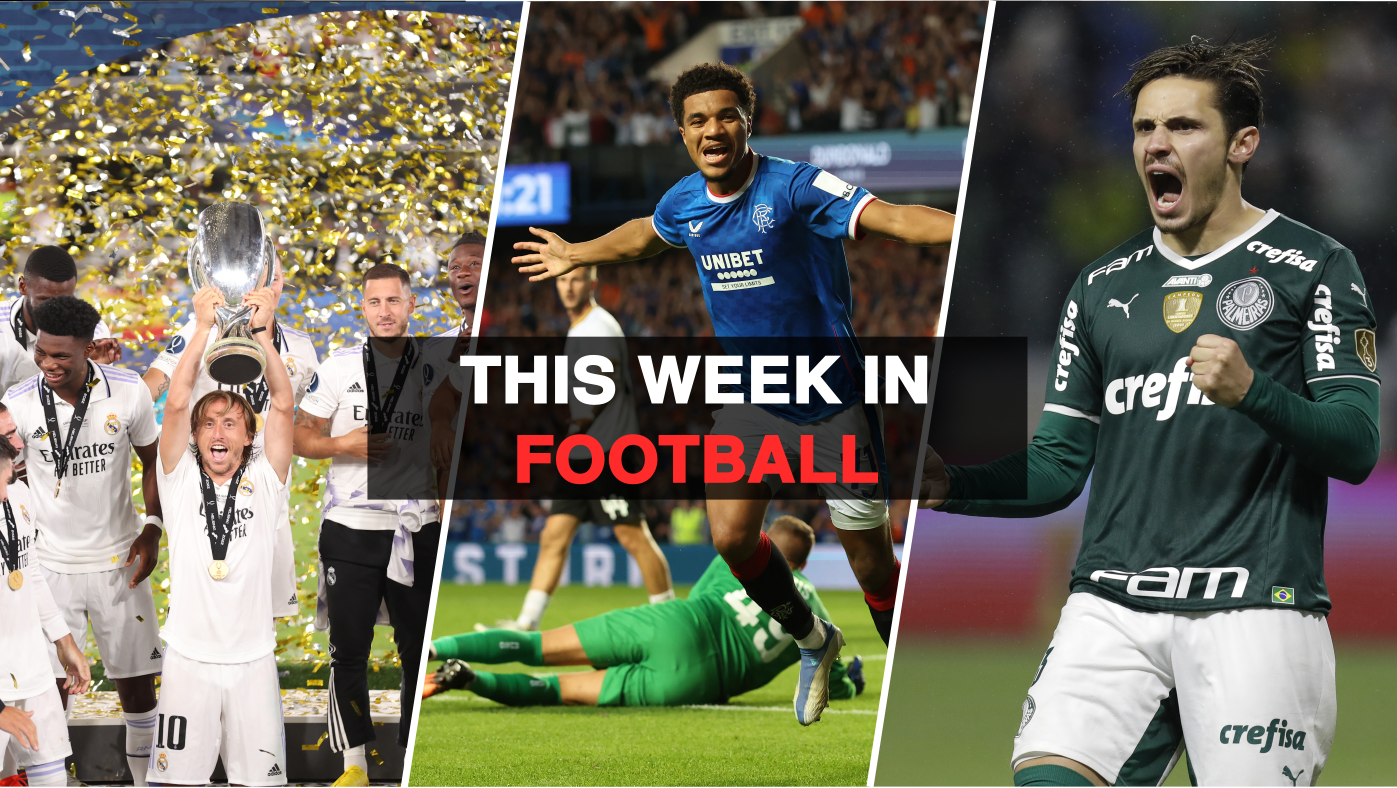 With the top-five European leagues returning for the 2022/23 season, it is safe to say that football is back in full swing, and it will barely slow down before the World Cup kicks off in November.

So, our weekly column returns in its new guise, This Week in Football, where we will review the biggest and most meaningful results and stories every Friday.

On the agenda this time around, we have Real Madrid lifting the UEFA Super Cup, Rangers making a memorable comeback in the Champions League qualifiers, Palmeiras moving to the Copa Libertadores semi-finals and lots more:

The UEFA Super Cup was held in Helsinki this year, with Champions League winners Real Madrid facing Europa League holders Eintracht Frankfurt, who were participating in this showdown for the first time in their history.

Oliver Glasner’s side made just one change to the line-up that beat Rangers in May, as Juventus-bound Filip Kostić was replaced by Christopher Lenz at left wing-back.

Frankfurt certainly missed his creativity, and Real Madrid always looked threatening in the first half. A goal-line clearance from Tuta kept the scores level in the 18th minute, but David Alaba opened the scoring just before half-time after a corner kick.

Real Madrid were relatively comfortable in the second period, and after Karim Benzema doubled their lead in the 65th minute, they could coast home to lift their fifth-ever UEFA Super Cup title.

Recently-awoken Belgian giants Royale Union Saint-Gilloise had a two-goal lead over Rangers from the first leg so they were primed to continue their qualification campaign and feature in the Champions League for the first time in their history.

Dramatic turnarounds at Ibrox have been a common feature of Rangers’ recent past (think back to the second leg of the Europa League semi-final against RB Leipzig), so that is what Giovanni van Bronckhorst’s side were hoping to replicate. The first half was goalless till the 45th minute, but James Tavernier halved the deficit from the penalty spot on the stroke of half-time.

Summer signing Antonio Čolak scored in the 58th minute to level the tie on aggregate, and there only seemed to be one likely outcome thereafter. Bayern Munich loanee Malik Tillman headed in his first goal for Rangers after a goalkeeping error from Anthony Moris in the 79th minute, and despite Union trying their best, they did not really get close to an equaliser.

Union will feature in the Europa League this season, which will be their first appearance in European football in Europe for the first time in over 55 years. Rangers, on the other hand, will meet PSV Eindhoven as they look to seal a place in the Champions League for the first time since 2010.

Over in South America, the two continental competitions — the Copa Libertadores and Copa Sudamericana — were in the crunch stages, as the second legs of the quarter-finals were being played.

In the Libertadores, back-to-back champions and current Brazilian Serie A leaders Palmeiras faced local opposition on their path to the last-four in the form of Atlético Mineiro.

After a goalless first leg, the tie was to be decided at the Allianz Parque. Since CONMEBOL had done away with the away goals rule in 2019, the advantage was certainly Palmeiras’ going into the match.

29 minutes in, though, everything changed when Danilo was sent off for a very bad tackle, leaving the hosts a man short. Despite that, Atlético struggled to create any meaningful chances and ended up being outshot.

There were two more sendings off — one for either side — in the closing stages of the match, but the lack of goals meant that we would have a penalty shoot-out (there is no extra time in the Libertadores until the final). Each of the first 10 spot-kicks went in, so we entered sudden death. Rubens faltered on the visitors’ sixth attempt, which was saved by Weverton, and that proved to be the decisive moment in the tie.

In the semi-final too, Palmeiras will face a Brazilian side, Athletico Paranaense, who overcame Estudiantes thanks to a goal from 17-year-old Vitor Roque in the 96th minute of the second leg of their tie.

Over 1,000 kilometres south of São Paulo, there was a Copa Sudamericana quarter-final tie also being decided on penalties. It featured three-time Brazilian champions Internacional and Peruvian side FBC Melgar, who had never even reached the last 16 of a continental competition in their history, let alone get past the quarter-finals.

Once again, there were no goals to speak of and a numerical disadvantage for the home side, although in this case, it came much later in the match — in the 74th minute. The shoot-out was far from perfect in this game, though, as just one of the first five penalties went in. Melgar’s goalkeeper delivered a heroic performance as he saved three penalties, helping his side to a famous success.

Two Brazilian sides remain in the last-four of the Copa Sudamericana, but Melgar have avoided both for now as they will take on the champions of Ecuador, Independiente del Valle.

Back in Europe, arguably the most incredible story of them all has seen the only second-tier side competing in Europe this season extend their campaign to unimaginable lengths.

FC Vaduz are the premier club from the capital city of Liechtenstein, the sixth-smallest country in the world. Their entire population would easily fit in Konyaspor’s home stadium, and even then there would be about 4,000 empty seats left. Unsurprisingly for such a small country, Liechtenstein’s club football is intertwined with their neighbour Switzerland, as all seven of their clubs compete in the Swiss leagues.

Coming from a different association, those clubs cannot qualify for European football via the Swiss spots. Therefore, the only European place available to Liechtensteinian clubs goes to the winner of their cup, which is FC Vaduz more often than not.

Despite being afforded a shot at qualification on an almost yearly basis, FC Vaduz have never featured in the group stage of a European competition in that history. After holding on for a draw at home, they only went and thrashed the third-best side in Turkey from the 2021/22 season in their own backyard even after initially going a goal down.

Their final hurdle comes in the form of Austrian giants Rapid Wien. FC Vaduz certainly are the underdogs for that tie, but after a result like this, anything is possible.