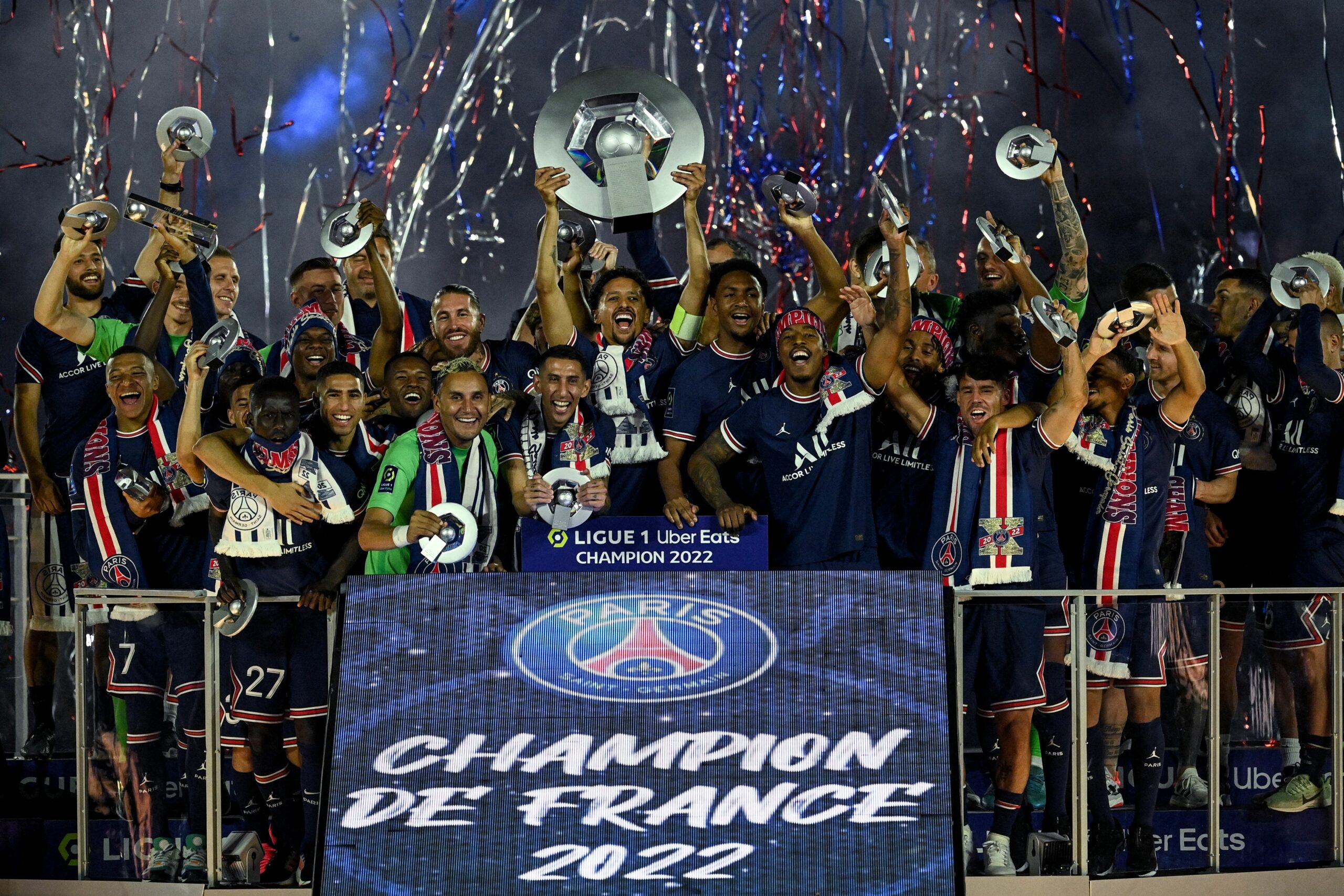 The 2022/23 Ligue 1 season is just around the corner, with reigning champions Paris Saint-Germain chasing their second successive league title.

While there should be not even a shred of doubt when it comes to the title race, numerous sides are capable of earning promotion to the Champions League.

Things should be equally exciting in the lower reaches, as we present you with our 2022/23 Ligue 1 season preview.

This one is a no-brainer, to be honest. Defending champions Paris are miles ahead of all other domestic competitors.

And what’s more important, they have an all-star roster to blow the competition out of the water.

We cannot name a single Ligue 1 defence that can cope with such an intimidating presence up top, especially after the household trio had the entire year together to find on-field understanding.

But if there is a team that could be asking questions in the title race next season, it would be an immensely reinforced Olympique Lyon.

In addition to retaining the services of standout performers Lucas Paqueta, Karl Toko Ekambi and Houssem Aouar, Les Gones have enjoyed a stellar transfer window in terms of the incomings this summer.

Following an embarrassing eight-place finish last season – their worst Ligue 1 ranking in the 21st century – Lyon have taken matters into their own hands this summer.

A raft of top-class reinforcements should provide head coach Peter Bosz with enough firepower to challenge for the Ligue 1 crown, let alone interfere in the running for the Champions League spots.

Of all the sides tipped to be battling it out for promotion to Europe’s most prestigious competition, Lyon will be under the most severe pressure following a sensational recruitment campaign.

Apart from the abovementioned duo, two more sides will have legitimate chances of nailing down the coveted Champions League qualifying spot next season.

Philippe Clement, who replaced Niko Kovac midway through the 2021/22 campaign, proved his managerial credentials during his trophy-laden spell at Club Brugge.

He picked up where he left off in the French principality, turning mid-table strugglers into genuine top-three candidates in less than a year.

Now that they have ex-Liverpool forward Takumi Minamino and former Bundesliga star Breel Embolo in their ranks, Monaco should have no problems locking up a sought-after third place.

But not everything will go smooth for Les Monegasques, as last season’s surprise package Rennes have kept hold of all standout performers and head coach Bruno Genesio.

A string of poor results at the tail-end of last season eventually cost Les Rennais a coveted Champions League qualification, as they finished three points adrift of Monaco in fourth.

If they can get back to winning ways since the get-go, Rennes could make things complicated for Clement’s side and Lyon in the upcoming race for Champions League football.

You may be wondering why Marseille had no place in our Champions League list of candidates, but the answer is simple – Jorge Sampaoli left the Stade Velodrome after just one season in charge.

The charismatic Argentine manager was the architect of Marseille’s impressive 2021/22 season, leading Les Olympiens to their second runner-up finish in three Ligue 1 campaigns.

Only time will tell whether Igor Tudor, who guided Hellas Verona to a mid-table Serie A finish last season, would be able to fill Sampaoli’s shoes.

But in the meantime, Marseille have done too little in the transfer window to help their new boss emulate his predecessor’s achievement.

However, what Tudor has at his disposal should be enough to get Marseille into Europa League contention.

After Galtier left Nice to take over the managerial reins in Paris, Les Aiglons will face an uphill task to secure another season in European competitions.

However, Pascal Gastien’s men seemingly ran out of steam as the season progressed, with their underwhelming performances in the second half of the 2021/22 campaign resulting in a 17th-placed finish.

Unless they find a way to reignite their impressive showings from the early stage of last season, Clermont may be staring down the barrel of relegation.

Lorient, who finished level on points with the Lancers last season, are another top-flight strugglers tipped for a season-long dogfight against the drop.

Of sides to have secured Ligue 1 survival in 2021/22, no one had won fewer league matches than Christophe Pelissier’s team (8), highlighting the gravity of the situation they had to deal with last season.

Then, of course, newly-promoted outfits Toulouse, AC Ajaccio and Auxerre will form the conclusive part of a group destined to fight against relegation until the final weekend.

While the former two earned direct promotion to Ligue 1 as the top two Ligue 2 sides, the latter defied the odds to defeat St Etienne in the relegation play-offs.

For what it’s worth, we back Auxerre to outperform the two remaining newcomers next term and potentially even mount a genuine top-half challenge.

As for the strongest relegation candidates, Lorient did next to nothing in the transfer window to build a case for themselves as a solid top-flight fixture.

A plethora of up-and-coming talents have plied their trade in Ligue 1 over the years, and the same should be the case next term. We’ve picked out three we think are worth watching out for in 2022/23.

Heavily linked with a mega-money move to the Premier League this summer, Sulemana is more likely to pledge his future to Rennes for another season to aid his development.

A natural left-winger, albeit equally well versed in playing on the right, the 20-year-old Ghanaian starlet went from strength to strength last season before picking up a nasty back injury.

Blistering pace combined with the tricky footwork and the ability to cut inside are the factors to make Sulemana one of the most eye-catching talents in Ligue 1.

Before taking a lengthy spell on the sidelines, he served as a major focal point to unbalance defences, adding an extra flavour to Rennes’ pacey counter-attacks.

The newest gem to emerge from the famous Lyon academy pool, Cherki has long been tipped to lift the Groupama Stadium faithful out of their seats with his free-flowing style of football.

The France U21 international has earned a reputation as a generational talent in his homeland, following a decent breakthrough season back in 2021/22.

Cherki can play anywhere alongside the frontline, as his one-touch passes, quick thinking and the ability to evade the press with his nifty feet make him a menace to the opposition defences.

A phenomenal talent with groundbreaking potential, the 18-year-old has what it takes to become the next big thing in French football.

After tearing Bundesliga backlines apart for six years at Schalke 04 and Borussia Monchengladbach, Embolo is bracing himself for a new Ligue 1 experience with Monaco.

Given his long-term presence in Europe’s top-tier football, you would be right to think the Switzerland international is already a veteran, yet he is only 25.

With Embolo, it’s everything about his physical presence and movement off the ball, as well as his lethal instincts in front of goal and well-documented aerial strength.

An already established senior star, Embolo will link up with last season’s Golden Boot runner-up Wissam Ben Yedder in what could be a backbone for Monaco’s potential top-three charge in 2022/23.